13 militants’ attacks take place in the Donetsk sector and 24 – in the Luhansk sector yesterday. A citizen potentially involved with activity of Russia-backed battalion “Somali” detained at Mayorsk checkpoint.

Kyiv, October 25, 2016. The situation escalated in the Donetsk sector. “Russia-backed militants violated the ceasefire in three flashpoints – Luhanske, Zaitseve and Avdiivka. Militants were shelling Ukrainian positions from heavy armor – mortar launchers and canons – both during the day and at night. They launched over 230 large caliber missiles,” said the spokesman of the Ministry of Defense of Ukraine on ATO related issues Colonel Andriy Lysenko at a press briefing at Ukraine Crisis Media Center. The armistice held in other areas yesterday. In total, 13 militants’ attacks took place in the Donetsk sector yesterday, and 10 of them involved use of heavy armor. “Four flights of militants’ unmanned aerial vehicles took place in Novoazovsk district of Donetsk region,” added Col. Lysenko. 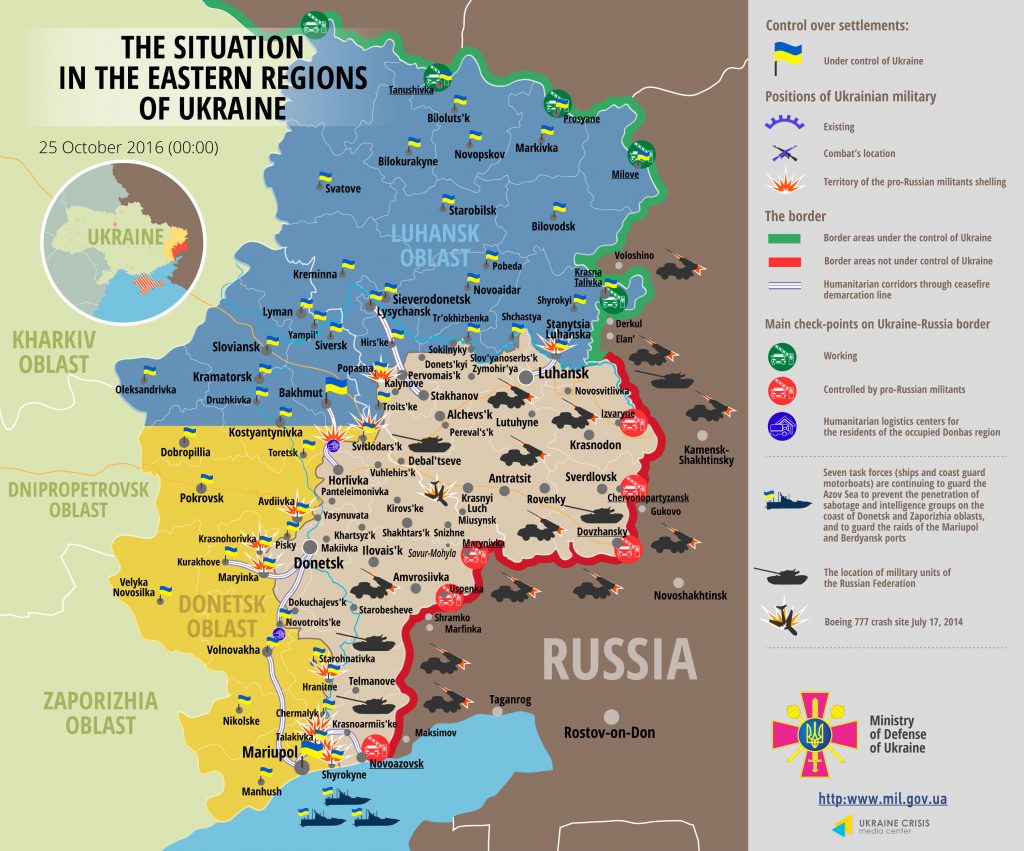 The situation remains unchanged in the Mariupol sector: hostilities continue in Mariinka district, Hranitne and Pavlopil-Shyrokyne frontline area. Mortar launchers were actively used. Ukrainian troops responded with fire in the south strongholds. In total, 24 militants’ attacks took place in the Mariupol sector, and nine of them involved use of heavy armor.

According to the spokesman, Ukrainian border guards detained a citizen at Mayorsk checkpoint who could have been involved with activity of Russia-backed battalion “Somali”. A so-called “ID” signed by a notorious militant Mikhail Tolstykh also known as Givi was found with the driver. According to the driver, a woman who was driving this vehicle before him forgot the ID there. We are verifying the information now,” informed Col. Lysenko.

Moreover, Col. Lysenko informed that 10 artillery missiles caliber 122 mm were found near Toretsk. Law enforcement officers are trying to find the owner of the explosive devices. Moreover, policemen detained an “arsenal” in an abandoned garage in near-front Krasnohorivka. “While checking recent information, investigators found about two thousand cartridges for automatic weapons and five ball grenades with fuses,” informed the spokesman.