43 militants’ attacks take place 24 hours in the Mariupol sector, 19 of them involve use of heavy armor. Hostilities resume at the Butivka coal mine position for the first time in many days

Kyiv, October 27, 2016. Number of militants’ attacks significantly increased in the Mariupol sector. Militants moved heavy armor closed to the frontline and received another batch of ammunition, informed Colonel Oleksandr Motuzyanyk, spokesman of the Ministry of Defense of Ukraine on ATO related issues at a press briefing at Ukraine Crisis Media Center. “Militants launched over 220 mortar shells, tank and artillery missiles at Krasnohorivka-Mariinka and Pavlopil-Shyrokyne frontline areas,” said the spokesman. Most attacks took place in the afternoon when militants simultaneously started shelling Ukrainian positions along the entire frontline. In total, 43 militants’ attacks took place in the past 24 hours in the Mariupol sector, and 19 of them involved use of heavy armor. 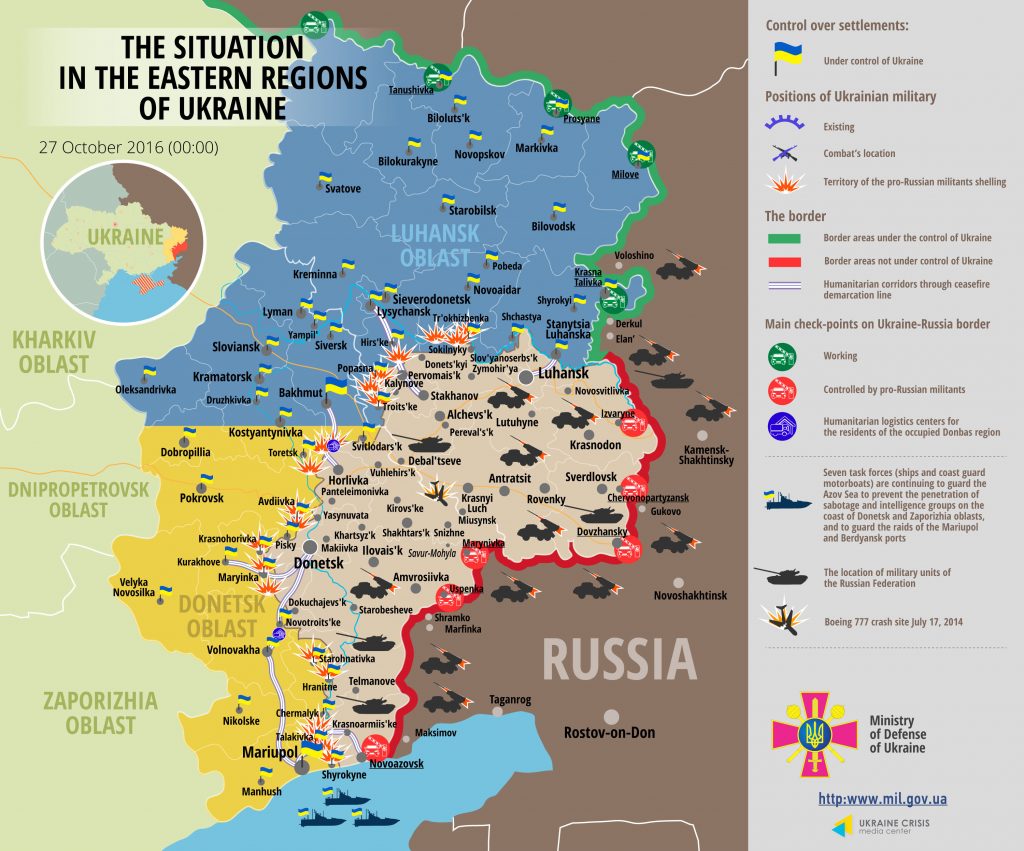 In the Luhansk sector hostilities continued along the entire frontline area, with the exception of Stanytsia Luhanska area. “For instance, militants violated the ceasefire in Zolote, which happened for the first time since disengagement of Ukrainian and militants’ troops and equipment. Major hostilities took place in Popasna district – Novozvnivka, Novooleksandrivka and Troitske,” said Col. Motuzyanyk. Ukrainian troops responded with fire. In total, 15 militants’ attacks took place in the Luhansk sector yesterday, namely one attack from heavy armor.

Avdiivka industrial area remains the main flashpoint in the Donetsk sector. Militants who deployed their positions and heavy armor in Yasynuvata were repeatedly shelling Ukrainian positions from mortar launchers during the day. “Moreover, they violated the armistice in the Horlivka perimeter many times in Zaitseve, Maiorsk and Novhorodske. A civilian was injured at Maiorsk checkpoint,” added Col. Motuzyanyk. It was the first time in a long time that hostilities resumed at the Butivka coal mine position. The ceasefire held in the Svitlodark bulge yesterday. In total, 14 hostile attacks took place in the Donetsk sector yesterday, and nine of them involved use of heavy armor.

One Ukrainian serviceman died in combat in the past 24 hours, and three were wounded.

According to Col. Motuzyanyk, Ukrainian police yet another time stopped an attempt to send ammunition out from the ATO zone. Law enforcement officers found six cartridges, a ball grenade, gun powder and drugs in a parcel destined from Mariupol to Zaporizhzhia. The seized things were sent for expert evaluation.