A series of mortar attacks take place in Avdiivka, Butovka coal mine position and Opytne to push Ukrainian troops out of their positions, while situation is comparatively calm in the Luhansk sector.

Kyiv, October 28, 2016. The total number of mortar shells and artillery missiles launched by militants in the Donetsk sector in the reached 300, informed the spokesman of the Ministry of Defense of Ukraine on ATO related issues Colonel Andriy Lysenko at a press briefing at Ukraine Crisis Media Center. Russia-backed militants were active in this sector in Avdiivka-Opytne frontline area. Militants conducted a series of mortar attacks in Avdiivka, Butovka coal mine position and Opytne in the morning and during the day. “Doing this, the adversaries wanted to hide his real intentions of pushing Ukrainian troops out of the positions they occupy near Avdiivka,” explained Col. Lysenko. 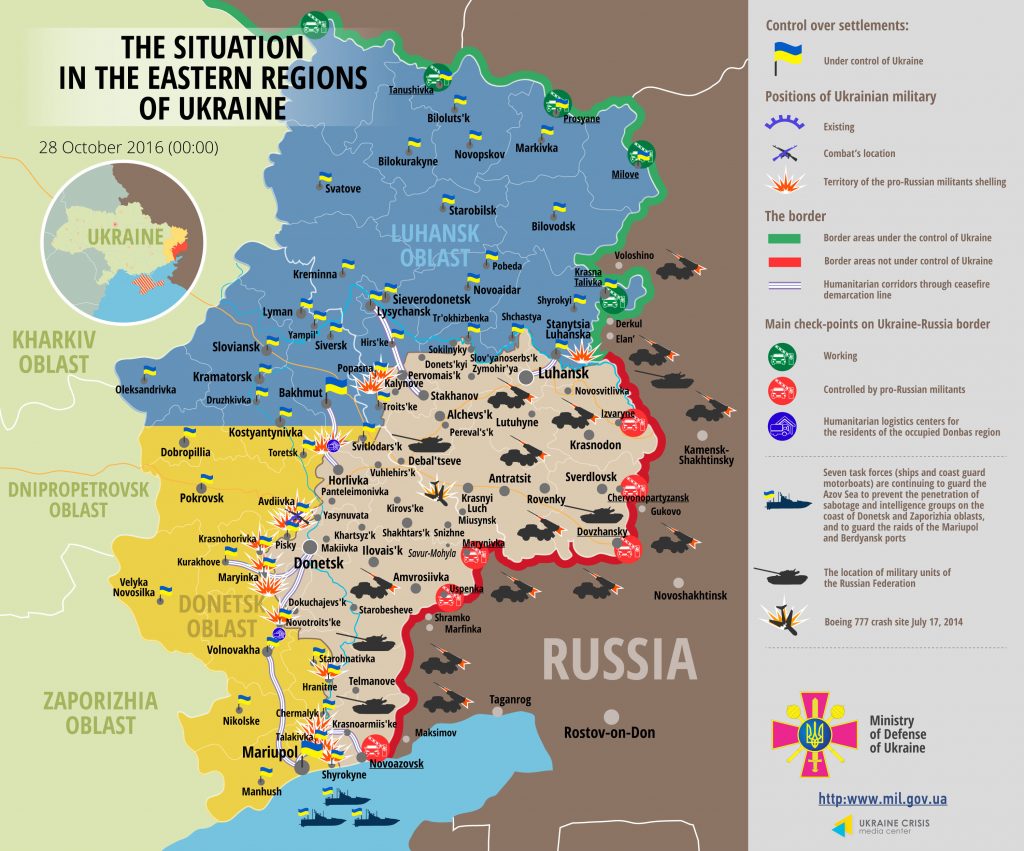 Command of militants’ troops engaged several hundred militants from two different subdivisions, several artillery batteries and an unmanned aerial vehicle into this operation. “Having conducted artillery preparation involving use of 82-mm mortar launchers and 152-mm cannons, militants were trying to take Ukrainian positions by assault. Reinforcement arrived to the frontline of our defenses to repel the attack.  The firefight ended by Ukrainian troops’ victory,” said the spokesman. After the assault militants continues massively shelling positions of Ukrainian troops from heavy armor. Col. Lysenko added that militants redeployed several Grad multiple rocket launcher systems to Yasynuvata. Moreover, Russian proxies shelled residential quarters of militant-controlled Makiivka from heavy armor. “The attack was delivered from hostile positions arranged in the vicinity of Yasynuvata town and the villages of Mineralne and Yakovlivka,” said the spokesman. In total, one firefight and 16 militants’ attacks took place in the Donetsk sector yesterday, and 14 of them involved use of heavy armor.

The situation was comparatively calm in the Luhansk sector. Militants shelled Ukrainian positions three times – in the crossing point of the frontline and Ukrainian-Russian state border and in Popasna district. “Only small weapons were used here,” said Col. Lysenko.

The situation in the Mariupol sector remains restless. Hostilities continue along the entire frontline. The biggest number of militants’ attacks took place in Mariinka and Shyrokyne. They continue using heavy armor, mostly mortar launchers. Militants fired over 200 mortar shells toward Ukrainian troops’ positions yesterday. “Moreover, they used barrel artillery, armored personnel carrier and snipers,” added Col. Lysenko. In total, militants conducted 34 attacks in the Mariupol sector in the past 24 hours, and half of them involved use of heavy armor.

One Ukrainian serviceman died in combat yesterday, and six were wounded.

According to Col. Lysenko, another batch of reinforcement came for militants from Russia. Two wagons with cold-weather gear, two with ammunition and two with spare parts for military equipment arrived at Khartsyzk railway station.