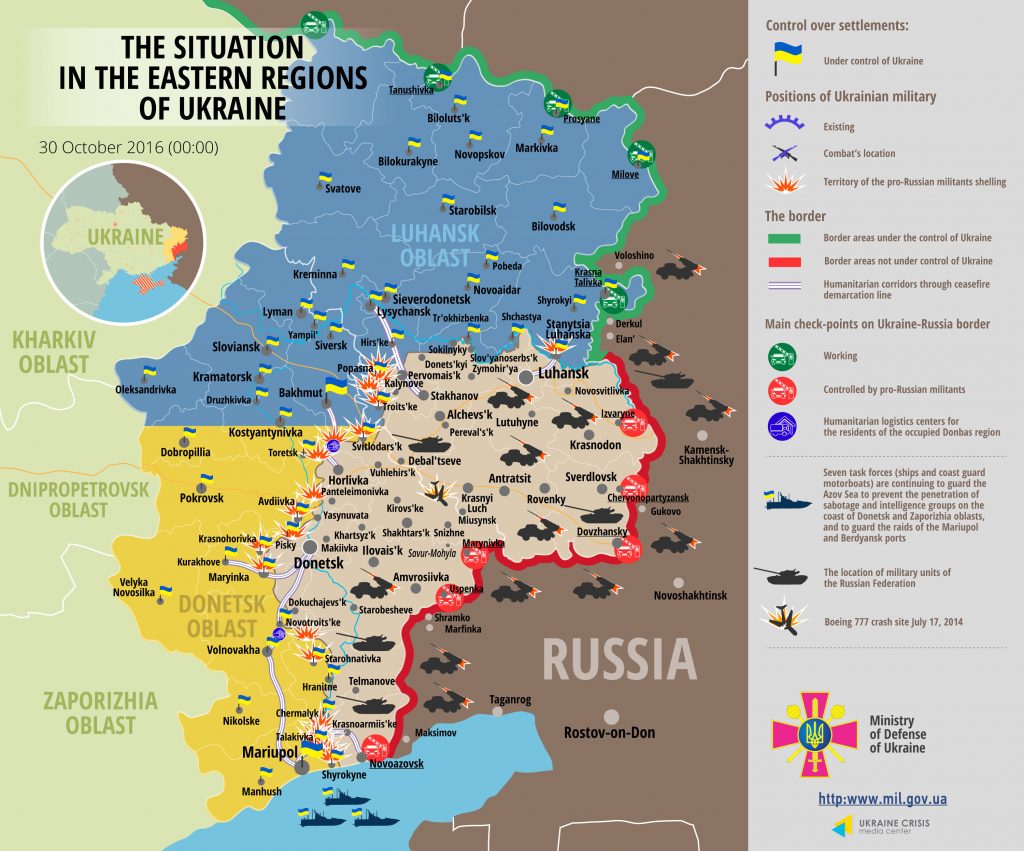 Militants violated the ceasefire in the Donetsk sector 14 times, and nine of them involved use of heavy armor.  The day started with intense artillery and mortar attacks in Zalizne, Avdiivka and in Vesele – Krasnohorivka area. “Over 130 mortar shells and missiles were launched in 4.5 hours at our positions,” said Col. Motuzyanyk. Major hostilities continued in Avdiivka industrial area, and one firefight took place. “A hostile subversive reconnaissance group processed to our strongholds following a number of attacks. The assault was repelled. After their failure the occupants shot toward Avdiivka several times more, involving mortar launchers as well,” said the spokesman. Moreover, attacks took place in Svitlodarsk, Zaitseve and Verkhniotoretske.

Militants violated the armistice 10 times in the Luhansk sector. “Main hostilities took place in Popasna district yesterday. In addition to a series of attacks from small weapons,  the adversary used mortar launchers and a cannon. It happened in the afternoon. Another hostile attack took place in Stanytsia Luhanska,” said Col. Motuzyanyk. Furthermore, “Fanthom” mobile team which counters goods’ contraband across the demarcation line, and three troops were wounded. “The incident took place in Lopaskyne village near Shchastia. Occupants started shooting at our troops from the opposite bank of Siverskyi Donets River. A border guard section promptly arrived to help their colleagues defeat the attack,” elaborated the spokesman.

Law enforcement officers detained a young man in Bakhmut – Moscow bus with suspicion of participation in Russia-backed militant groups. “The detained was transporting construction materials for militants’ strongholds in spring 2014 to earn some money during occupation of Sloviansk. After active hostilities started, he moved to Kharkiv region and then to Russia,” informed Col. Motuzyanyk.

Col. Motuzyanyk also informed that the President of Ukraine signed a decree yesterday on awarding 109 troops who were wounded or killed in Donbas. “These are soldiers, sergeants and officers who fought at flashpoints – in Zaitseve, Avdiivka and the Mariupol sector,” he said.