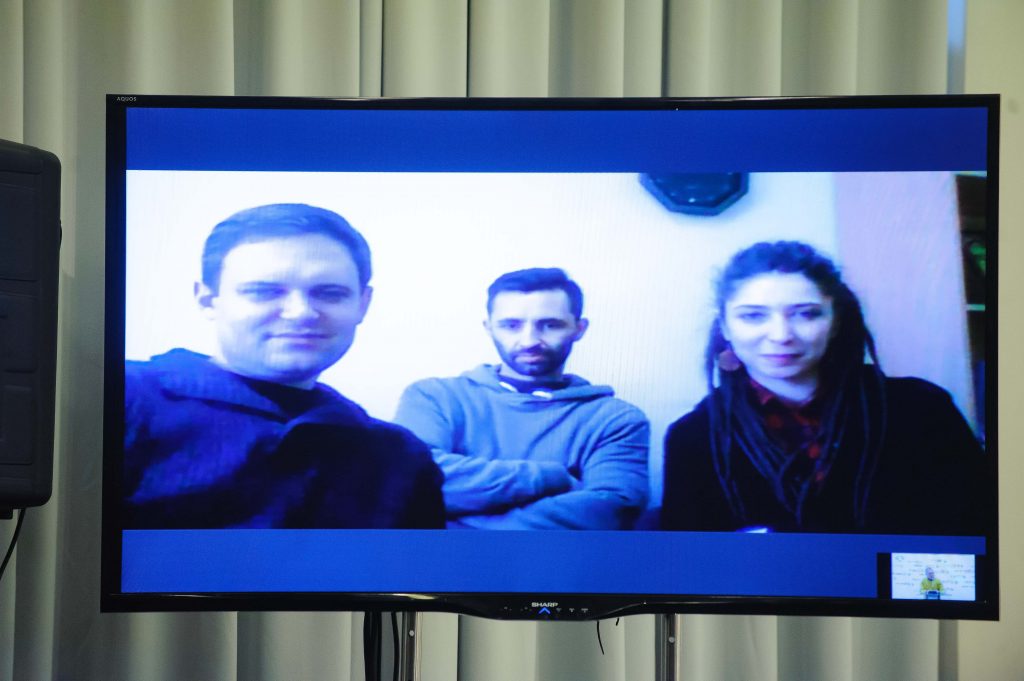 Luhansk Regional Ukrainian Music & Drama Theatre finished its tour in the West of Ukraine under the slogan “East and West: let’s change the country together”. This trip was initiated as by Yuriy Garbuz, head of Luhansk Regional Civil-Military Administration and supported by authorities of Ivano-Frankivsk, Lviv and Zakarpatska Regions as a campaign to strengthen Ukraine’s unity. At a press conference at Ukraine Crisis Media Center they shared their impressions about the tour. The conference was held within the framework of UCMC project “Spokesperson of peaceful life” supported by the Ministry of Foreign Affairs of the Federal Republic of Germany.

“In the west of Ukraine we performed two plays, “Maklena Grasa” and a famous “Za Dvoma Zaytsiamy” (“Chasing two rabbits” – en). In Kyiv we played “Baiky Severa” (“Tales of the North”), a play about life of IDPs [internally displaced persons] from the east of Ukraine and Crimea”,  said Sergiy Dorofeev, director of the theatre.

According to the actors, the tour was a success. “It was a challenge to play on a new stage. However, the audience was extremely welcoming in every town. We were really impressed,” said Veronika Zolotoverkha, stage director and actress. Concert halls  were rather small, up to 500 places, but they were overcrowded, some spectators even had to stand. “We are a displaced theatre, and such interest inspired us a lot: now we know that people want to see us, that we are doing right things,” added Sergiy Dorofeev.

The actors felt very anxious before performance in Lviv, known for its demanding audience. “Lviv is a king of Mekka of Ukrainian theatre. I know a lot of actors from Lviv, so I’m aware of the professional level there”, explained stage director Yevgen Merzlyakov. The point of particular concern was the play “Maklena Grasa”, filled with spirit of Lviv, local peculiarities and humor. For actors from Donbas it was a challenge. “However, after the performance people told us that the play looked as if it was directed by someone from Lviv. They said that the actors really managed to show this spirit of the city. They also asked how this play with its Lviv humor is perceived in the east of the country. I answered that people understand it – perhaps, not in full, but they do understand,” noted Sergiy Dorofeev.

The trip fulfilled its main mission, the actors say. “With this trip we have proved that this division on East and West is an imaginary problem. We had an opportunity to meet people from Lviv, Uzhgorod, Drogobych and we understood one another perfectly well, it was very pleasant communication,” said Sergiy Dorofeev.

“The most important thing is that people saw us and saw that we are an inherent part of Ukraine. Perhaps, we have some local peculiarities, but we are Ukrainians. I hope, after this encounter more people will stop asking themselves is it worth fighting for territories of the east of our country,” added Yevgen Merzlyakov. After the play in Ivano-Frankivsk they sang the national anthem, continuing tradition of a local theatre troupe that came with a performance to Severodonetsk two years ago, after liberation of the city.

“A Letter to a Friend”

During the tour, the actors supported the campaign “A Letter to a Friend”. They brought with them letters from children of the Luhansk region to children from the west of Ukraine. Before every performance they passed a bulk of these letters to local schools via representatives of local authorities. “One may say that a letter written by hand is out of date, however, there is a particular romance. First children will read these letters, then they will probably get in touch in the social media or by phone. If one thousand of letters resulted in one hundred of friends, it would be a success”, noted Sergiy Dorofeev.

During the trip, actors and their colleagues from the west decided to continue tradition to host performances of one another. Now they consider exchange tours for stage directors. “Now the future building for our theatre is undergoing renovation. We hope that in March we will already have our own stage and we’ll have opportunity to invite other theatre troupes”, said Sergiy  Dorofeev.

When the war started, Luhansk Regional Ukrainian Music & Drama Theatre moved from Luhansk to Severodonetsk. At present, the theatre has no permanent building, however, it continues its work. Its program currently includes 13 plays by classical and contemporary Ukrainian authors. The tour in the west of Ukraine was already the fourth tour over these two years. Before that, the actors have already played in Kyiv, Mykolaiv, Kherson and Dnipro.