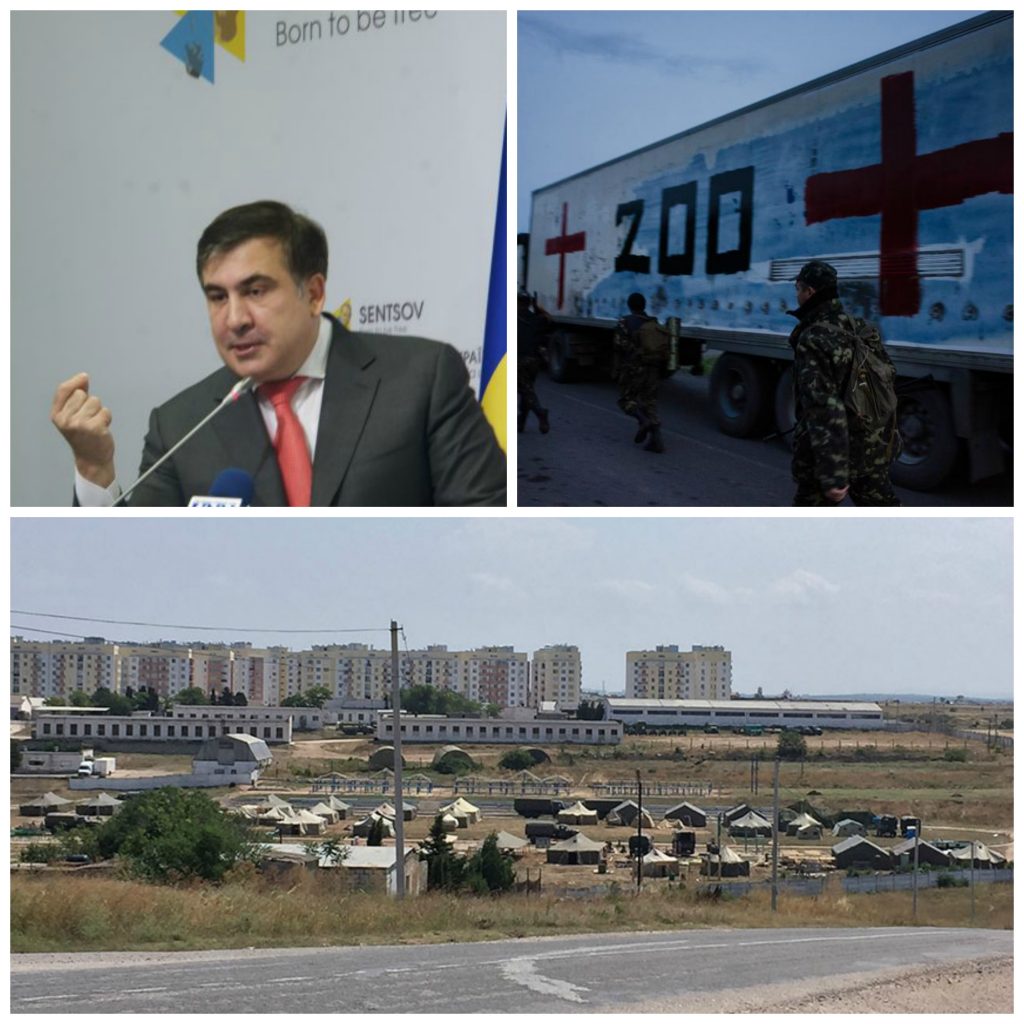 Situation in the combat zone in eastern Ukraine

OSCE registered increase of hostilities. Number of ceasefire violations in the combat zone in Donbas is increasing. OSCE Special Monitoring Mission (SMM) notes a 40 percent increase in comparison to the last week, said Alexander Hug, First Deputy Chief Monitor of the OSCE SMM to Ukraine. “If we talk in figures, over the last week the mission recorded about six thousand ceasefire violations. We have registered about eight thousand violations already this week. It makes over one thousand ceasefire violations per day.” He said biggest part of the attacks that OSCE registered took place in the so-called triangle: the Donetsk airport – Yasynuvata – Avdiivka and in the western part of Luhansk region – between Popasna, Pervomaysk and Zolote [text in English].

[UCMC note: contrary trends as to the combat situation reported by Ukrainian military officials and by the OSCE probably result from different counting methods. Ukraine’s official count is based on the number of attacks, while OSCE’s count is based on rounds fired].

OSCE: trucks that transport human remains to Russia. Over the past 2,5 years under the conditions of limited access to the conflict and border areas OSCE monitoring mission registered over two dozens of vehicles marked “Cargo 200” (equivalent to killed in action) that were transporting remains of Russians killed in action from eastern Ukraine back to Russia. The statement was made by Daniel Baer, U.S. Special Representative to the OSCE at the meeting of the OSCE Permanent Council. He reiterated that Kremlin keeps denying its direct participation in the conflict in eastern Ukraine.

Fighting corruption: resignation of Saakashvili, checks after e-declarations are filled out

Saakashvili. Head of Odesa regional state administration Mikheil Saakashvili has declared his resignation. He accused the central authorities of hampering reforms and proceeding with corrupt practices (news in English, video in Russian). On May 29, 2015 Saakashvili was granted Ukrainian citizenship based on the request that it is in Ukraine’s state interest. On May 30, 2015 he was introduced as the new Head of Odesa regional state administration.

Checks by anticorruption authorities. First criminal proceedings for embezzlement of funds by Ukrainian civil servants are likely to appear not earlier than January 2017. Over a week after October 30 the National Agency for Corruption Prevention will be checking whether the e-declarations of assets were submitted in time. As the next step the Agency staff will be checking whether the declarations have been filled out in full, they will be also checking declarants’ lifestyle.

National Anticorruption Bureau  (NABU) will check e-declarations for cases of high-level corruption, stated Artem Sytnyk, director of the Bureau. “Should there be any claims or requests pointing at declarations that may contain signs of embezzlement or in which the data is not truthful, we will be checking them. We have already started such checks on a large number of declarations,” Sytnyk said.

He also added that the NABU started checking activities of civil servants who had declared big amount of cash.

Human rights: court trial over the director of Ukrainian library, cases of Sushchenko and of Dzehmilev’s son

Court trial over the 58-year-old director of the Ukrainian library Natalia Sharina continues in Moscow. Sharina is accused of “fueling national hatred.” Prosecutor accused the director of purchasing prohibited books and placing them on book shelves. Sharina denies all charges. In October 2015 Russian law enforcement staff searched the library, shortly after they detained Sharina. Later house arrest was chosen as pre-trial measure for her. Sharina’s lawyer Ivan Pavlov claims he is under surveillance.

Russian lawyer Mark Feygin arrived in Kyiv where he is to study the prospects of exchanging Ukrainian journalist Roman Sushchenko detained in Moscow and charged with spying. According to the lawyer, there is no other way to return the journalist back to Ukraine. In course of negotiations with Ukrainian authorities Feygin expects to discover if there are any detained Russian security service staff members in Ukraine. Moreover, Feygin stated that in the nearest time one should expect fabricated information in Sushchenko’s case to appear, it may be a film or a video. Feygin noted that it is quite possible that the journalist would be recognized as a “Russophobe” in Russia. Sushchenko was detained in Moscow on September 30, court ruled to keep him under pre-trial arrest at least until November 30.

Russian lawyer Nikolay Polozov, defender of the son of Mustafa Dzhemilev Khaiser, fears that a new criminal case may be started against his client in Russia. “Russia needs Khaiser as a hostage, a tool to exercise pressure upon his father, Crimean Tatar leader,” said Polozov. Dzhemilev’s prison term comes to an end, but Russian authorities may start a new criminal case.

Dzhemilev was charged with murder of Fevzi Edemov, a family friend. He used his father’s gun, it happened in Backhchysaray in 2013. Prior to Crimea annexation by Russia, a court in Kyiv sentenced Khaiser to three years and eight months of imprisonment. After the annexation, Russian investigation authorities decided to reinvestigate his case. Khaiser was transferred from Simferopol detention center to Krasnodarsky Kray in Russia.

Following the annexation of Crimea Russia’s “Chernomorneftegaz” state owned company illegally took hold of the assets of Ukraine’s “Chornomornaftogaz”. The company extracts annually two billion cubic meters of shale gas in the Black Sea and thus covers the peninsula’s needs. The Russian company in question is in all sanction lists. Gas is extracted in the water area that is Ukraine’s economic zone, which is violation of the United Nations Convention on the Law of the Sea of 1982.

Moscow rebuilds numerous Soviet-time military bases in Crimea and is building new ones deploying its military there. Current military capacities of the peninsula exceed the ones Crimea had when controlled by Ukraine. A Reuters investigation demonstrates that Russia is renewing old missile storage facilities, naval bases, radars and airdromes. Russia’s naval and ground forces stationed in Crimea are the ones mainly reinforced. Air forces are to be reinforced as well: thus, former civilian airport Belbek has been already turned into a military air base. Russia states that it is stepping up its military capacities as an answer to NATO’s actions in Poland and the Baltic States.

Opinion polling: can opinion polls in Crimea be trusted?

Eighty six percent of Crimeans are generally content with their life on the peninsula, most content are the persons aged 60 and over. Of the polled 79% trust Sergey Aksyonov’s politics. This is the data released by the All-Russian Center for Studying Public Opinion on October 24. Last year the Center released the data according to which 95% of the interviewed “would have voted once again for joining Russia at the referendum”. Even higher number of respondents allegedly rated Vladimir Putin’s work as very positive.

Paris Commune is the name of the art squat in Kyiv that dates back to the late 80s – early 90s. It used to be located in an emptied house on the same-name street. Ukrainian artists of the New Wave used to live and work there. Works of those who are now considered classics of Ukrainian contemporary art – including Oleksandr Hnylytsky, Oleh Holosiy, Dmytro Kavsan, Yuriy Solomko,Valeriya Trubina, Vasyl Tsagolov etc. are presented within the “PARCOMMUNE. Place. Community. Phenomenon” exhibition at the PinchukArtCentre.

Iranian artist Mahmoud Bakhshi will create a light installation on the place of the toppled Lenin monument in Kyiv. In his work entitled “Endless Celebration” the artist uses three figures: that of Lenin, artist Madonna and Saint Mary. Each figure contains a traffic light color. The installation was created in the framework of the “Public Contract” project organized by IZOLYATSIA foundation.

”Poroshenko: All declarants have to explain the source of their funds” – Ukraine Today

”From Russia with Love: Russian media on Savchenko’s visit to Moscow” – Ukraine Today

”Ukraine Needs Support From Next U.S. President to Fight Russian Aggression” – interview of Hromadske International with Valeriy Chalyi, Ukraine’s Ambassador to the U.S.

“Trial of all that is Ukrainian” – column of Vitaliy Portnikov on the court trial over the director of Ukrainian library in Moscow, Ukraine Today