Kyiv, November 19, 2016. Ukrainian Security Service yesterday liberated Illia Bogdanov who had been kidnapped by Russian intelligence services. Illia Bogdanov is a former officer of the Russia Federation Federal Secrutiy Service (FSB) who refused to obey illegal orders and defected to Ukraine. Law enforcement agencies started searching for Bogdanov on November 14 after they received information that the man was missing. “Owing to joint efforts of the Security Service of Ukraine (SBU), General Prosecutor’s Office and the National Police we found out that the Russian intelligence planned to kidnap and kill him on the territory of Russia. They planned to take Bogdanov across Ukrainian-Russian border with the help of their recruited accomplices in Ukraine. Alfa special forces unit managed to prevent the crime in time, liberated Bogdanov and detained the enemy’s agents,” informed the spokesman of the Ministry of Defense of Ukraine on ATO related issues Colonel Andriy Lysenko at a press briefing at Ukraine Crisis Media Center. 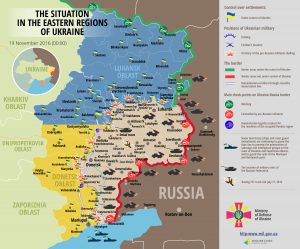 “31 hostile attacks took place in the Mariupol sector yesterday, and 18 of them involved use of heavy armor. This sector remains the area with the most intense hostilities. In Krasnohorivka adversaries were shooting over four hours non-stop using heavy armor –mortar launchers and 152-mm cannons. A civilian woman was injured at the entry of a residential building. The situation in Pavlopil-Shyrokyne frontline area is much more complicated. For instance, three intense tank attacks at our positions took place in Shyrokyne, which was the first time in many days. Moreover, occupants are using mortars on large scale, and they shelled Dokuchayevsk area from mortar launchers and armored personnel carrier,” elaborated the spokesman.

Ukrainian Armed Forces incurred no losses in combat yesterday, and one serviceman was injured.

According to Col. Lysenko, another former militant was liberated from criminal liability as a part of the SBU project “You are waited for at home”. “A female machine gunner from self-proclaimed “Luhansk People’s Republic” (LPR) returned to peaceful life. She decided to abandon the militants group when she saw humiliation and inhuman attitude of militants’ chiefs to their subordinates. The woman retorted to Ukrainian law enforcement agencies. As she had not committed any severe crimes, she was liberated from criminal liability. Now she came back to her family and found a job,” finalized Col. Lysenko.