Highest intensity of combat actions stands in the Mariupol sector where combined Russian-militant troops make highest number of attacks and use heavy weapons.

“The number of militant attacks in the Mariupol sector is the highest in the combat zone. It is even higher than in the two other sectors together. Occupants are using heavy weapons all along the frontline,” said Colonel Andriy Lysenko, spokesman of the Ministry of Defense of Ukraine on ATO-related issues at a press-briefing at Ukraine Crisis Media Center. The attacks took place in Maryinka area, in Novohryhorivka and in the area close to the Sea of Azov. Almost 150 mortar mines and nine artillery shells were fired upon Ukrainian positions. Most powerful attacks took place in Krasnohorivka, they lasted incessantly for two hours and twenty minutes. “Militants also violated ceasefire in Novotroyitske and Starohnativka,” added Colonel Lysenko. Russia-backed militants made a total of 16 attacks in the Mariupol sector over the last day, 10 of the attacks were made from heavy weapons. 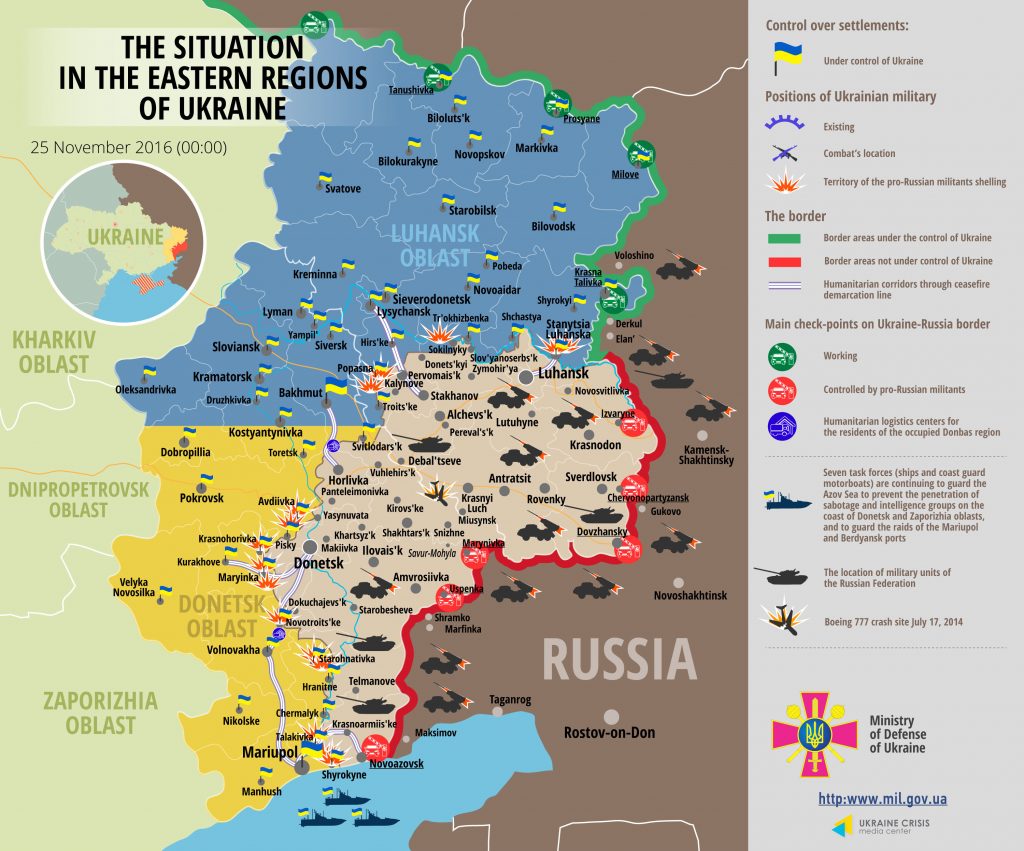 In the Luhansk sector combat actions restarted in Stanytsia-Luhanska area. Russia’s proxies were firing in the city of Stanytsia Luhanska itself for over two hours. In addition to light weapons of various types, militants were using armored vehicles. They also violated ceasefire in Valuyske village located close to the contact line and to the state border. “A total of 28 mines were fired upon Ukrainian positions, the attack lasted for one and a half hour. A series of hostile attacks also took place in Popasna area between 10 a.m. and 8 p.m.,” said the spokesman. A total of 10 militant attacks took place in the Luhansk sector over the last day, two of them were made from heavy weapons.

In the Donetsk sector combined Russian-militant troops fired twice upon Ukrainian positions. Each of the attacks lasted 50 minutes. “In Opytne a hostile sniper was firing upon the positions of Ukrainian troops,” added Colonel Lysenko.

One Ukrainian serviceman was killed in action over the last day. “He was shot by sniper in Opytne,” reported Colonel Lysenko.