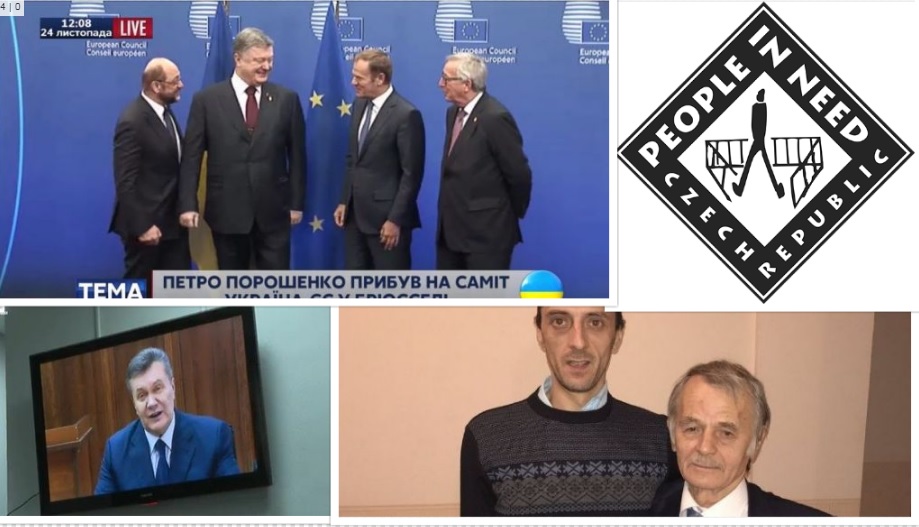 Situation in the combat zone in eastern Ukraine
The situaiton remains tense. Over the last week Ukrainian side registered 227 attacks, as a result three Ukrainian servicemen were killed in action and 16 were wounded in action.

OSCE. U.S. mission to the OSCE states that November saw highest number of registered ceasefire violations in eastern Ukraine since 2014. It was reported by Kate Byrnes, U.S. Deputy Permanent Representative to the OSCE. She said situation in the east is deteriorating. Over the last two months nine violent acts and threats to lives of OSCE monitors were registered.

OSCE also named five hotspots in Donbas where security situation has considerably deteriorated over the past two weeks – in the area of Avdiivka, Yasynuvata and Donetsk airport; in the area of Novozvanivka, Kalynove, Veselohorivka and Troyitske; south-east and east of Svitlodarsk; eastern and north-eastern parts of Mariupol as well as on western outskirts of Horlivka. At the same time according to their data Minsk-banned weapons keep being extensively used. Thus, mission noted drastic increase in number of the use of tanks, artillery and multiple rocket launcher systems.

Disengagement of troops near Stanytsia Luhanska: another derailment. Militants of the “Luhansk People’s Republic” (“LPR”) derailed disengagement of troops and equipment in Stanytsia Luhanska yet again, reports ATO press center referring to the Joint Center for Control and Coordination of ceasefire (JCCC). Seven days of ceasefire are required so that disengagement of forces may start in the area. Nevertheless on November 27 JCCC monitors registered attacks on the part of the “LPR”.

Setup of a new separatist movement. Former “LPR” leader Valeriy Bolotov currently staying in Russia, is spreading information on the setup of civic and political movement “Yedineniye” (eng. – unity), reports Dmytro Tymchuk, coordinator of Information Resistance group on his Facebook page. He said main task that the organisation declared is uniting forces of the self-proclaimed “Donbas republics” with collaborationist movements of Kharkiv, Mykolayiv, Odesa and Kherson regions to break away from Ukraine. “The program of the movement foresees exit of the “LPR” from territorial borders of Luhansk region as well as the return to the “Novorosiya” project (separation of Ukraine’s southern and eastern regions and uniting them into a “state” that would later become part of Russia,” Tymchuk said.

“DPR” blocks humanitarian organization. Militants of the self-proclaimed “Donetsk People’s Republic” (“DPR”) stripped the Czech NGO “People in Need” (PIN) off the so-called “accreditation”. They did not name the reason for revoking the “accreditation” that consents work in occupied areas. Same day PIN warehouse with humanitarian aid was sealed off and all foreign volunteers were ordered to leave the militant-controlled territory of Ukraine over the next 24 hours. Representative of the so-called “DPR” Denis Pushylin accused the Czech NGO in corruption and “contemptuous attitude towards the people of ‘DPR’,” reports militant-controlled DAN website.

On the edge of humanitarian disaster. The city of Toretsk, Donetsk region, remains cut off water supply after militants damaged the water pipe system. The city finds itself on the edge of humanitarian disaster, reports the ATO press center. Thus, according to the ATO Staff water supply to Toretsk and nearby towns was interrupted following the attacks on November 23 after a shell hit the water pipe between Horlivka and Toretsk. Due to the interrupted water supply kindergartens and schools have been shut down, some parts of the city remain deprived of central heating. Repair works cannot start until militants provide security guarantees.

Detention of Russia’s Dozhd TV crew. On November 25 reporters of Dozhd Russian TV channel Sergey Yerzhenkov and Vasiliy Polonskiy were detained in the so-called “DPR”. IT equipment was seized from them, the videos were deleted, phone of one of them got broken and laptop blocked. On November 26 they were transported to the territory of Russia and banned from entry to the self-proclaimed republic.

Interrogation of the runaway president Viktor Yanukovych
On November 28 at 13:00 EET a Kyiv district court held interrogation of the former president of Ukraine, Viktor Yanukovych, over video conference. Since Yanukovych fled from Ukraine he has been in Russia. He was testifying as witness in the case of murdering Euromaidan activists. Later Prosecutor General Lutsenko charged him with treason. It is the second attempt to interrogate Yanukovych. Interrogation was first scheduled for November 25, however representatives of the “Right Sector” blocked Lukyanivske detention facility, where prosecuted former ‘Berkut’ riot policemen are being held. They were supposed to be transported to Svyatoshynsky court for interrogation in the trial on Maidan killings. Repesentatives of the “Right Sector” claimed that they feared that former policemen will be simply released.

On November 25 at the press-conference in Russia’s Rostov-on-Don Hromadske TV journalist Natalia Gumenyuk succeeded to ask Yanukovych three questions: whether he is sleeping well after he was calling the Russian Army into Ukrainian territory, how much money he took out of Ukraine and how he let the shootings happen in February 2014.

Many Ukrainians are angry that Yanukovych himself is not charged in the case but is questioned as witness. Lawyers explain that according to the law, the ‘Berkut’ officers are suspects in the proceeding. In case suspect changes the case needs to be restarted. Person presented as witness in one case can though be suspect in another one.

Complete text in English on the EU-Ukraine summit conclusions is available here.

Human rights: Dzhemilev’s son released from prison, rally held to support Kolchenko
On November 25 son of the Crimean Tatar leader Mustafa Dzhemilev, Khaiser, was released from Russian prison. Khaiser was sentenced to three years and eight months in prison by a Kyiv court for having murdered Fevzi Edemov in the courtyard of his house. After the annexation of Crimea, Russian prosecution restarted the investigation. Dzhemilev was transferred from Simferopol detention center to Russia’s Krasnodarsky Krai.

Vice speaker of Ukraine’s Parliament, Iryna Gerashchenko, was saying that back in 2014 Vladimir Putin suggested to Mustafa Dzhemilev to release his son in exchange of Dzhemilev’s loyalty to the new authorities of Crimea.

On November 26 in Kyiv activists rallied to support Ukrainian political prisoner in Russia, Oleksandr Kolchenko, on the occasion of his birthday. Kolchenko was sentenced to 10 years in maximum security prison in Chelyabinsk region of Russia. He was convicted under fabricated accusation in terrorism. Ukrainian film director Oleg Sentsov has been convicted in the same case to 20 years in prison. Back in spring 2016 Ukraine’s Ministry of Justice prepared all the required documents for extradition of the two Ukrainians back to their home land, however the Russian side refused stating that the two have automatically acquired Russian citizenship after the annexation of the peninsula.

Crimea: public budgets get cut, attempts to recruit Ukrainian troops for spying
In 2017 Russian authorities plan to cut down the budget of Sevastopol from RUB 25 billion to RUB 18 billion, at the same time the government aid will constitute RUB 7.5 billion. According to the press-service of the peninsula’s occupational government, budget cuts may affect implementation of the program of social infrastructure construction. Earlier member of the Russian parliament, Andrei Kozenko, stated that due to the sanctions the peninsula may get less Russian governmental aid.

Ukraine’s Security Service assumes that the people who have been dubbed Ukrainian subversives or spies in Crimea have simply refused to break their loyalty to the Ukrainian state and work for Russian intelligence, said chief of office of Ukraine’s Security Service Head, Oleksandr Tkachuk. “Our service does not rule out that all the detention cases that Russia’s Security Service reports in Crimea are unsuccessful attempts to recruit Ukraine’s citizens. In order to demonstrate their force, Russian law enforcement put their threats into action, these are the threats that they voice to Ukrainian citizens in the Autonomous Republic of Crimea,” he said.

Earlier Russia’s Security Service (FSB) stated that they had detained “members of the subversive-terrorist group of the Main Intelligence Directorate of Ukraine’s Defense Ministry” in Sevastopol on November 9. The FSB demonstrated video of their alleged “confessions”.

Culture: history of the last 30 years narrated in a performance, Ukrainian film awards in Europe
Exhibition “Into the dark”. Political events and social developments in Ukraine over the past 30 years are in the focus of a large group exhibition by Ukrainian artists “Into the dark”. Exposition is centered around the photo and video footage that documents artistic performance events starting from the 80s until nowadays. Works of over two dozens of artists and art groups of various generations make part of the exhibition in Kyiv. Artistic pool includes Ksenia Hnylytska, R.E.P. group, David Chichkan, Lesia Khomenko, Yuriy Leiderman, Masoch Fund etc. In May 2016 the exhibition was presented in Vienna’s WUK cultural center.

Feature film “My grandmother Fanny Kaplan” [trailer], where Myroslav Slaboshpytsky starred as one of the main actors, was acknowledged as the best foreign film at the Crystal Palace International Film Festival in London.

Result of the Polish-Ukrainian cooperation – documentary “When will this wind stop” [trailer] received the prize as best student film at the IDFA International Documentary Film Festival in Amsterdam. The film narrates lives of three generations of Crimean Tatars after the annexation of the peninsula.

Our selection of English-language materials produced by Ukrainian media

”Yanukovych in court” – reporting and analytics by Hromadske International