The situation is again turbulent in all the sectors, Ukraine suffers no fatalities and militants start destroying no longer usable weaponry on the occupied territories. Humanitarian aid from UNHCR arrives to the self proclaimed republics.

The most active hostilities took place in the Mariupol sector yesterday, though the number of attacks was smaller compared to the previous days. “Russia-backed militants opened fire from mortar launchers along Vodiane-Shyrokyne frontline area, launching 40 mortar shells. At the same time, the enemy used armored weapons in Vodiane yesterday. Moreover, three armed provocations were insigated in Krasnohorivka, Mariinka and Talakivka,” informed spokesman of the Ministry of Defense on ATO related issues Colonel Andriy Lysenko at a press briefing at Ukraine Crisis Media Center. 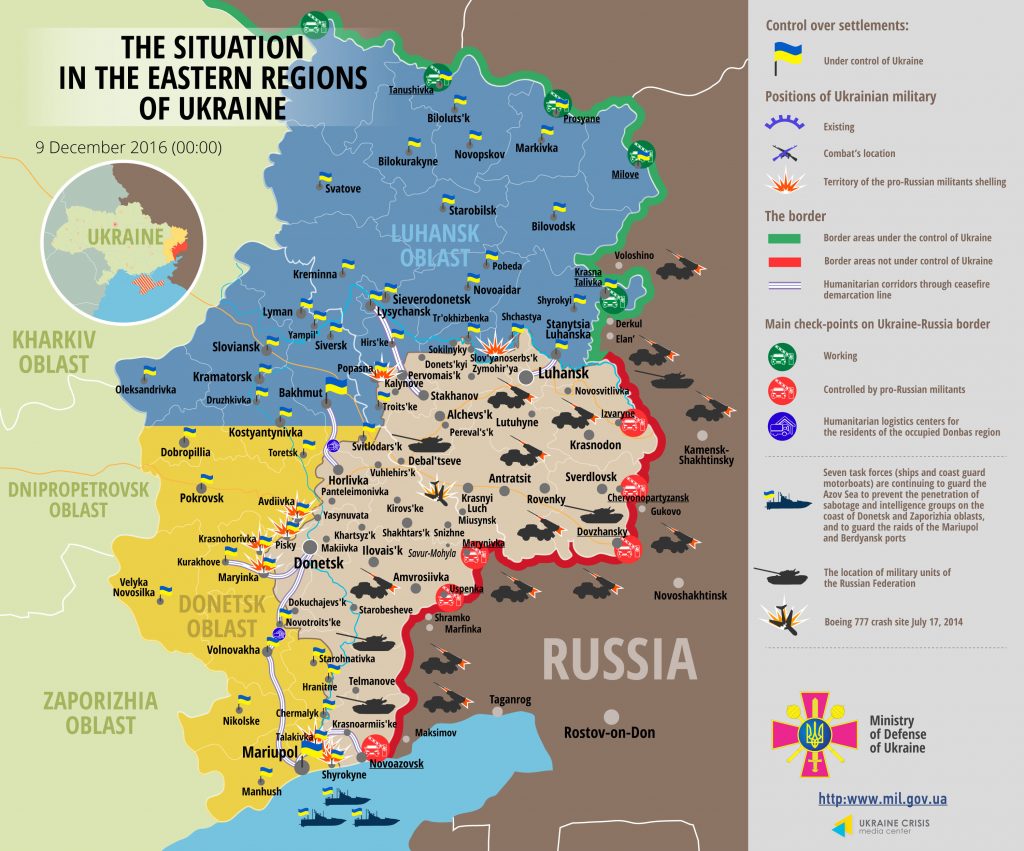 Militants made two mortar attacks near Novooleksandrivk east of Popasna, and one attack involving use of anti-aircraft mount near Lobachevske, on the left bank of the Siverskyi Donets River. Attacks started at 9 p.m. and lasted for 90 minutes.

Russia-backed militant groups violated the ceasefire twice in the Donetsk sector. “Just after the midnight militants conducted mortar attack in the vicinity of the Donetsk airport, launching over 10 mortar shells, And after the sunset the armistice was violated in Avdiivka, where militants where shelling Ukrainian troops’ positions from small arms and various grenade launchers for almost an hour and a half. Our troops responded with fire,” said Col. Lysenko.

Ukrainian military intelligence also informs that militants started destroying ammunition which is no longer usable on the temporarily occupied territory. “These are 82-mm mortar shells and rocket projectiles for Grad multiple rocket launcher systems. The process of liquidation of dangerous Soviet scrap is monitored by Russian career military engineers,” said the spokesman. It has been reported that such decision was resulted from regular incidents involving uncontrolled explosions of defective ammunition during exercise and in the combat area. “Five occupants died and over 20 were injured in the last three months while transporting such shells and missiles to the frontline,” said Col. Lysenko.

Col. Lysenko also informed that 54 trucks proceeded through Maiorsk and Novotroitske checkpoints yesterday. The convoy was loaded with humanitarian aid from the Office of the United Nations High Commissioner for Refugees, and one truck was carrying aid from a humanitarian fund. “The vehicles were carrying construction materials, food packages, furniture and heaters for inhabitants of the occupied territories of the Donetsk and Luhansk regions, with total weight over 500 tons,” he said.