Regardless of the ceasefire agreements, militants instigated a number of armistice violations. “Hostile attacks took place in all the sectors, but the situation tends to deescalate slightly. For instance, hostilities decreased in main flashpoints – at the Svitlodarsk bulge, in Avdiivka industrial area,  in Shyrokyne. Moreover, there were fewer cases of heavy arms use,” informed the spokesman of the Ministry of Defense of Ukraine on ATO related issues Colonel Oleksandr Motuzyanyk at a press briefing at Ukraine Crisis Media Center. Ukrainian Armed Forces incurred no losses in combat yesterday, and one serviceman was injured in Avdiivka. “It is the first time that we incur no losses at the Svitlodarsk bulge,” said Col. Motuzyanyk. 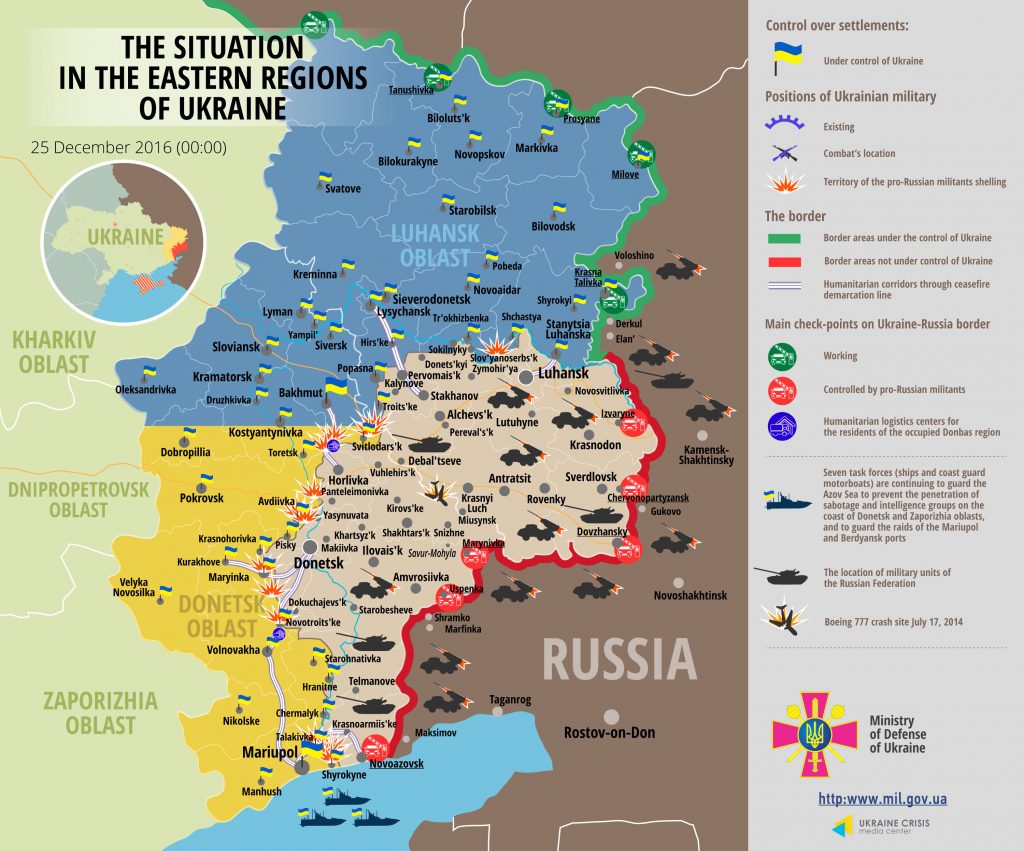 Militants opened fire 23 times within 24 hours in the Mariupol sector, using heavy weapons twice. Most attacks took place in Pavlopil – Shyrokyne frontline area. “In addition to numerous provocations involving use of light weapons, several mortar bombs were launched at our positions. Mostly occupants violated the armistice during the day,” elaborated the spokesman. Furthermore, militants violated the ceasefire in Mariinka and near Dokuchaevsk.

15 militants’ attacks took place in the Donetsk sector, and two of them involved use of heavy arms. “Militants regularly open fire in Luhanske, same as before. One attack took place at night and involved use of mortar launchers. 12 mortar shells were launched at our positions. Firefight between Ukrainian troops and adversaries lasted two hours in the Avdiivka industrial area.  Occupants also used a mortar launcher,” informed Col. Motuzyanyk. Moreover, Russian proxies opened fire near Horlivka and Butivka coal mine position.
One militants’ attack happened in Zhovte in the Luhansk sector. It continued for 25 minutes.

Col.  Motuzyanyk also informed that 5th training for mass media who are planning to work in the combat zone took place at 19th “Desna” training center. They were taught to provide first medical aid and behave properly during shelling.