Ukrainian Armed Forces incurred no losses in combat yesterday, and one serviceman was wounded in the vicinity of Novozvanivka. Militants engaged artillery in the Luhansk sector again. “The day started with intense attack involving use of 152 mm cannons. Russian proxies launched 50 artillery shells at Ukrainian positions near Troitske village. Moreover, militants fired 20 mortar shells near Novozvanivka. The enemy pursues the tactics of using heavy arms mostly at night. Moreover, the incidents of ceasefire violation are observed near Novotoshkivka where  hostile sniper was active, and in the vicinity of Stanytsia Luhanska,” informed the spokesman of the Ministry of Defense on ATO related issues, Colonel Oleksandr Motuzyanyk, at a press briefing at Ukraine Crisis Media Center. 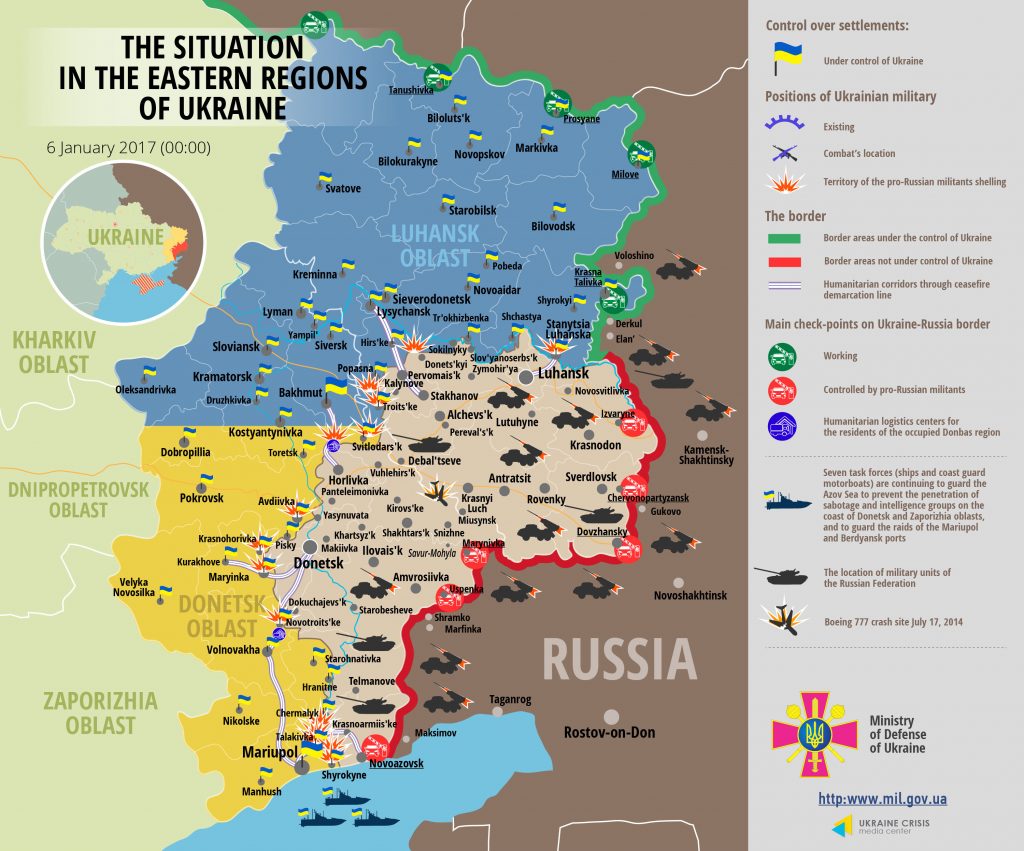 Militants violated the armistice six times in the Donetsk sector. Moreover, Russia-backed militants launched 49 shells in the vicinity of Avdiivka and Luhanske. They also opened fire from small arms near Zaitseve.

Militants’ attacks took place along the entire frontline in the Mariupol sector. “Almost all provocations were accompanied by the fire from light weapons, and it was only late at night that adversary launched five mortar shells near Mariinka,” said the spokesman.

According to Ukrainian military intelligence, Russian career officers broke into a local family’s home in Novoazovsk yesterday, on January 5, raped the woman and burgled the house. “This blatant violations of human rights took place during the entire Russian aggression in the East, but became more frequent because of excessive drinking and poor discipline in the ranks of Russian soldiers and militants,” added Col. Motuzyanyk. Moreover, the intelligence informs that many Russian troops are trying to feign an illness to avoid being commissioned to the East of Ukraine.