“In the Donetsk sector the situation remains difficult in Avdiivka industrial area,” informed the spokesman of the Ministry of Defense of Ukraine on ATO related issues Colonel Oleksandr Motuzyanyk at a press briefing at Ukraine Crisis Media Center. In total, attacks continued almost five hours during which militants were actively using machine guns and grenade launchers, firing over 70 mortar shells. Moreover, militants made a number of attacks in Kamianets and Putylivska coal mine position adjacent to the industrial area, engaging mortars as well. “Militant troops became active at the Svitlodarsk bulge again. They were actively using armor and mortar launchers together with light weapons,” said Col. Motuzyanyk. 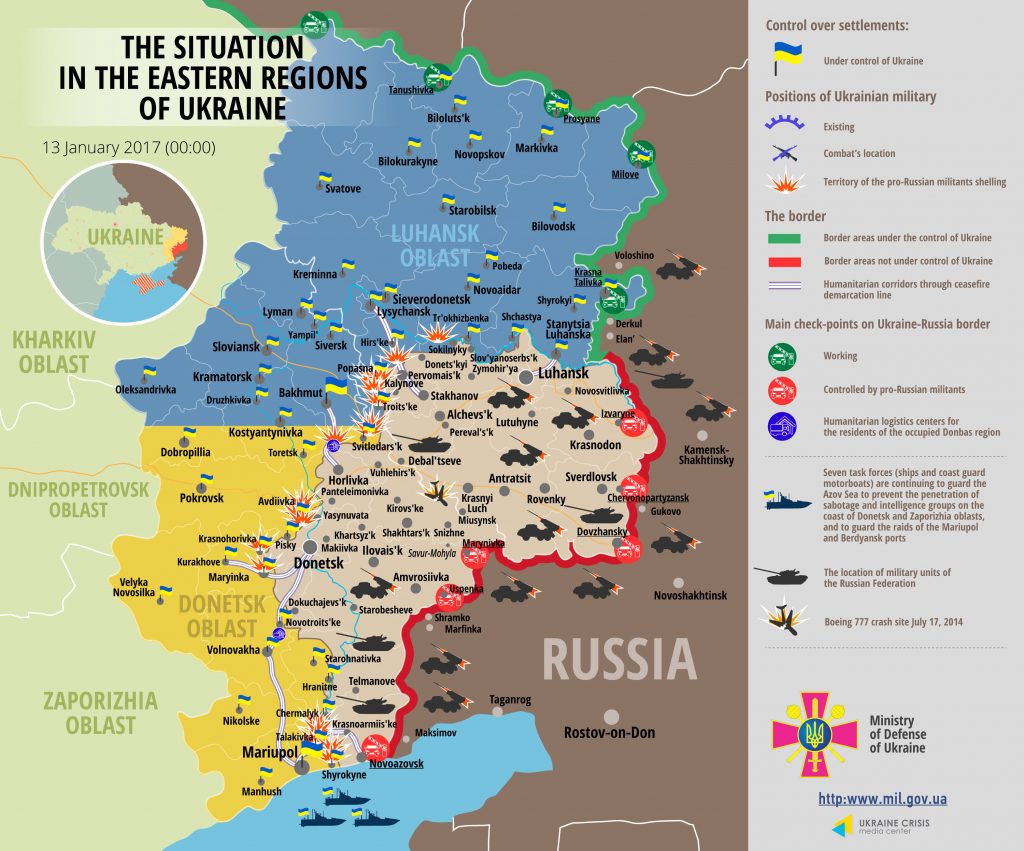 Attacks at the positions of Ukrainian troops in the vicinity of Luhansk lasted over five hours each. In the Horlivka perimeter hostilities took place only in north areas, near Zaitseve.  In total, 16 militants’ attacks took place in the Donetsk sector yesterday, and three fourths involved use of mortar launchers.

Ukrainian Armed Forces incurred no losses in combat yesterday, and three troops were wounded in the vicinity of Popasna.

Main hostilities in the Luhansk sector yesterday took place in the Popasna area, with the epicenter in Novozvanivka. Russia-backed militants made 16 attacks at Ukrainian positions, using mostly small arms during the day. However, they engaged mortars and 152-mm artillery after the sunset, launching 15 shells. “The situation was also restless in Troitske, but the armistice held east of Krymske to Syze village, along the entire front line,” added the spokesman. The total number of militants’ attacks in the Luhansk sector reached 26 yesterday, and heavy weapons were used in more, than one third of all incidents.

No cases of use of weapons prohibited by the Minsk agreements were registered in the Mariupol sector, in Mariinka – Krasnohorivka area. The same situation took place in Pavlopil – Shyrokyne area, where militants mostly fired randomly from light weapons. “The ceasefire held perfectly in Dokuchaevsk-Chermalyk frontline area,” emphasized Col. Motuzyanyk. In total, militants shelled Ukrainian troops 36 times in the Mariupol sector yesterday.

Report on the military developments as of January 12 is available here. Interactive data on the shelling: chronology shelling chart and the interactive map.