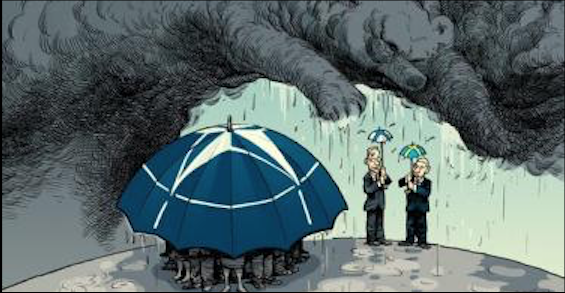 In December 2016 on the anniversary of Budapest Memorandum signature, the Institute of World Policy presented its study «Security in Transition. How to Counter Aggression with Limited Resources». Armed neutrality is one of the security models analyzed in the paper. In view of the recurrent interest to the potential adoption of neutral status by Ukraine, IWP presents the main conclusions about the outcomes in case of the adoption of this security model.

1. There is no guarantee that Russia would observe the neutrality of Ukraine.

Given numerous violations of bilateral and multilateral commitments to Ukraine by Russia, it is highly probable that hypothetic proclamation of neutrality would repeat the fate of the Budapest Memorandum. Neutral status of Ukraine will allow Russia to avoid responsibility for aggression, return access to Western resources, decrease attention of the West to Ukraine-related issues, and so will create all conditions for the resumption of aggression in different forms.

2. Adoption of neutral status has no wide-spread support among Ukrainians.

Surveys indicate that option of neutrality/non-alignment of Ukraine is supported by 25% of respondents. That’s why adoption of neutrality policy by Ukrainian authorities can instigate not only divisions in society, but domestic political crisis. This, in turn, will cause the deterioration of security situation in Ukraine, rather than improvement.

In 2010-2014 Ukraine conducted the policy of non-alignment – unilaterally surrendered the right to freely choose political-military alliances (as was required by Kremlin) without receiving guarantees inherent to neutrality from regional and global powers. Moreover, Kremlin preserved legitimized leverages of influence on Ukraine in the form of prolonged stationing of the Black Sea Fleet in the Crimea (an impossible scenario in case of Ukraine’s neutrality, which would have required the withdrawal of all foreign military units from its territory). Taken together, all these factors did not prevent Russian aggression, but created more favorable conditions for it.

That’s why idea that neutral status and giving up on Euro-Atlantic integration by Ukraine would satisfy Russia and result in cessation of hostilities against Ukraine is the wrong interpretation of causes and effects of Russian aggression against Ukraine.

4. Adoption of neutral status would not result in the end of Russian aggression and restoration of Ukraine’s territorial integrity.

Russia wants to achieve not only guaranteed non-participation of Ukraine in the military-political organizations, but first of all have a certain level of control over the processes related to Ukraine. Kremlin is interested primarily in real mechanisms to guarantee this status – namely, preservation of de facto or de jure control over the occupied Crimea and some parts of Donetsk and Lugansk oblasts, and through them over the rest of Ukraine. Therefore, the scenario “territorial integrity in exchange for a neutral status” (following the example of Austrian Declaration of Neutrality 1955) is highly unlikely.

Moreover, it should be kept in mind that in February 2014 Kremlin exhausted all the available non-military instruments of influence on official Kyiv and resorted to aggression as the form of preservation of control over Ukraine. In such circumstances, further militarization of Russian foreign policy is progressing, which is proved by the creation of military infrastructure in 2014-2017 all along border with Ukraine together with further militarization of the Crimea and occupied parts of Donetsk and Lugansk oblasts. As a result, Kremlin has no other options than to rely on the threat or employment of military force as the major tool of influence on Ukraine.

Besides, the example of Moldova proves that permanent neutrality can neither prevent nor help to cope with consequences of the Russian aggression. Moldova unilaterally not only declared its neutrality but introduced this provision to its Constitution in order to make Russia withdraw its forces and armaments from occupied Transnistria. Kremlin, however, continues to violate the territorial integrity and sovereignty of Moldova.

For example, Ukraine is one of the largest recipients of foreign aid for the defense purposes from the United States. During the first two years since the start of Russian aggression Ukraine received 760 million US dollars for security and defense programs. Adoption of the neutral status by Ukraine would block the possibility to get any assistance and weapons from partners.

Adoption of neutral status by such countries as Belgium, Denmark, Finland, Netherlands, and Norway during the Second World War did not help them to avoid aggression. However, even Sweden and Switzerland have been forced to modify their foreign policy according to the interests of the Third Reich.

Moreover, with the end of the Cold War policy of departure from strict compliance with this status and enhancement of cooperation with NATO/EU has been gaining popularity among the neutral countries of Europe in order to deal with new security challenges. In the aftermath of Russian aggression against Ukraine, countries such as Sweden and Finland have significantly intensified cooperation with the North Atlantic Alliance and the United States, including through the signing of new cooperation agreements and expanding areas of cooperation.

7. Neutrality as a guarantee of non-aggression works only if the neutral state is not in the interests of a revisionist state.

Until Russia continues to view Ukraine as a country within its “sphere of influence”, adoption of the armed-neutrality security model by Ukraine would lead not to normalization of relations with Russia, but to the loss of Ukraine’s international subjectivity.

UCMC announces the publication written by The Institute of World Policy.