Militants continue violating the ceasefire in the ATO zone, opening fire in all sectors.

Active hostilities resumed in the Popasna district in the Luhansk sector where Ukrainian positions near Troitske became the epicenter of combat yesterday. Russian proxies conducted a number of armed provocations at daytime there. Militants started massive artillery and mortar attack in the vicinity of Troitske after 9 p.m. “Attacks continued almost non-stop there until midnight, and occupants launched over 50 artillery shells. Adversaries simultaneously used mortar launchers and grenade launchers. Our defenders are holding the line, responding with fire,” said the spokesman of the Ministry of Defense of Ukraine on ATO related issues Colonel Oleksandr Motuzyanyk at a press briefing at Ukraine Crisis Media Center 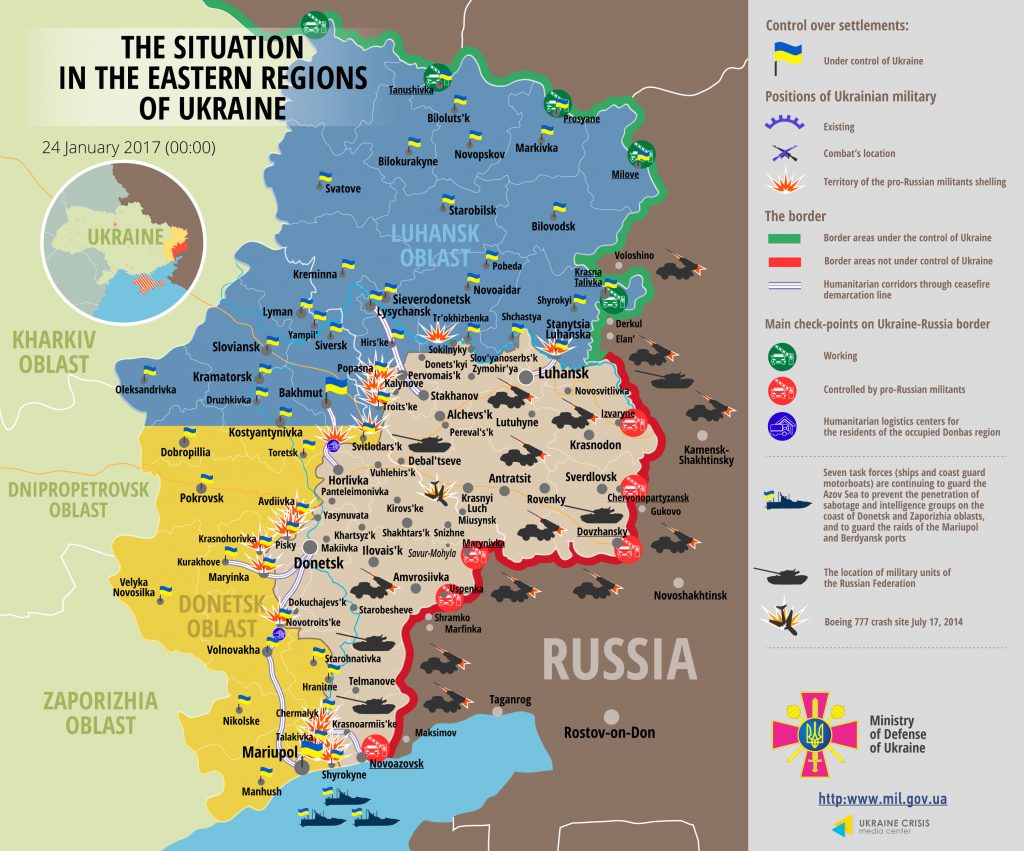 At the same time, militants used various grenade launchers and small arms to shell ATO troops in Stanytsia Luhanska from 8 to 11 p.m. Moreover, Russia-backed troops violated the ceasefire north of the Bakhmut road, near Krymske. In total, militants conducted 19 attacks in the Luhansk sector yesterday, and eight of them involved use of cannons and mortars.

The ceasefire held till afternoon in the Donetsk sector. Militants started actively shelling Ukrainian positions at the Avdiivka industrial area at 2 p.m. “The enemy used mortar launchers together with light weapons. Attacks stopped after five hours of firefights,” added the spokesman. Moreover, the situation was restless at the Svitlodarsk bulge where militants were shooting at Ukrainian positions for three hours. Two hostile provocations were registered in the vicinity of the Donetsk airport, and one of them involved use of sniping weapons. Moreover, militants violated the armistice once on the north outskirts of Horlivka. “In total, six hostile attacks took place in the Donetsk sector yesterday, and two of them involved use of mortar launchers,” said Col. Motuzyanyk.

Strongholds near Krasnohorivka and east approached to Mariupol became the area of main hostilities in the Mariupol sector. “Russian occupational troops were extremely aggressive in Krasnohorivka, conducting one of the largest mortar attacks in the recent months in this frontline area. Militants launched over 80 mortar shells of various caliber from the direction of Staromykhailivka at our positions within less than three hours,” said Col. Motuzyanyk. Firefights continued all day long in the frontline from Pavlopil to Shyrokyne. Nevertheless, militants used heavy armor – mortars – only in the southernmost area during the hours of darkness. Militants’ sniper was active in Novotroitske two days. Militants conducted 26 attacks in the Mariupol sector yesterday.

Ukrainian Armed Forces incurred on losses in combat in the last 24 hours, and two troops were wounded.

Col. Motuzyanyk said that the commander of the Center of Home Defense Forces of South military command of the Armed Forces of the Russia Federation issued a written order on prohibition of release of personnel located in Donbas. “It talks about militants whose so-called “military contract” has expired. This decision has been made to prevent decrease in number and fighting capacity of militants’ troops. Nevertheless, it caused resentment of militants located in the frontline and in military training areas and resulted in refusal to obey orders as well as fights with Russian career soldiers,” added the spokesman.

Report on the military developments as of January 23 is available here. Interactive data on the shelling: chronology shelling chart and the interactive map.