Militants made an assault at Avdiivka industrial area this morning. Artillery preparation started at 5 a.m., and after 7 a.m. they changed over to the offensive. “Adversaries have not succeeded as the attack failed; enemy incurred losses and retreated southwards. Capable countermeasures taken by our troops played the key role in this success,” informed the spokesman of the Ministry of Defense of Ukraine on ATO related issues Colonel Oleksandr Motuzyanyk at a press briefing at Ukraine Crisis Media Center. 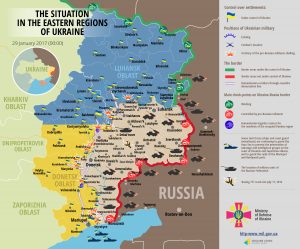 The situation remains extremely difficult at present. Militants continue shelling Ukrainian positions from artillery and mortar launchers. Nevertheless, they are not changing over to the offensive so far. Ukrainian troops along the entire frontline have been placed on the high alert. “This provocation pursues not only military but political goal of attempting to accuse Ukrainian troops of violation of the Minsk agreements. […] It is known for sure that three Ukrainian troops died in these strongholds and one soldier was injured. We emphasize that it happened today, on January 29,” added Col. Motuzyanyk.

Militants conducted the biggest number of shooting attacks at Ukrainian positions in the Mariupol sector yesterday. The number of incidents reached 38, and 14 involved use of heavy armor. Ukrainian Armed Forces incurred no losses in combat on January 28, and two troops were wounded in militants’ shooting attack in Kamianets and Shyrokyne.

Militants are using entire batteries of heavy armor in the Mariupol sector. It is the first time in many weeks that they shelled Ukrainian positions between Novotroitske and Dokuchaevsk from mortar launchers. Moreover, they launched several dozen mortar shells from Donetsk toward Krasnohorivka. Insurgents focused their efforts on coastal area. They launched over 180 122-mm bombs at Ukrainian positions in Vodiane within 180 minutes, shooting not from one spot, but from two – from Zaichenko and Sakhanka. “The situation is similar in the adjacent defensive lines – in Pavlopil, Hnutove, Talakivka, Lebedynske and Shyrokyne. In addition to artillery, mortars and light weapons, occupants deployed armor,” said the spokesman.

About half of all militants’ attacks in the Donetsk sector yesterday took place in the Avdiivka industrial area. They randomly used heavy armor, and Ukrainian troops responded with fire. “A hostile unexploded artillery shell landed in Avdiivka residential quarter. It was stuck in road pavement several meters from a multi-storied apartment house and was promptly disarmed,” said Col. Motuzyanyk. Two mortar attacks took place at the Svitlodarsk bulge. Moreover, three insurgents’ provocations took place in Zaitseve, Verkhiotoretske and Kamianets. The ceasefire held in the Donetsk airport yesterday. In total, 11 militants’ attacks took place in the Donetsk sector in the last 24 hours, and three of them involved use of heavy armor.

Report on the military developments as of January 28 is available here. Interactive data on the shelling: chronology shelling chart and the interactive map.