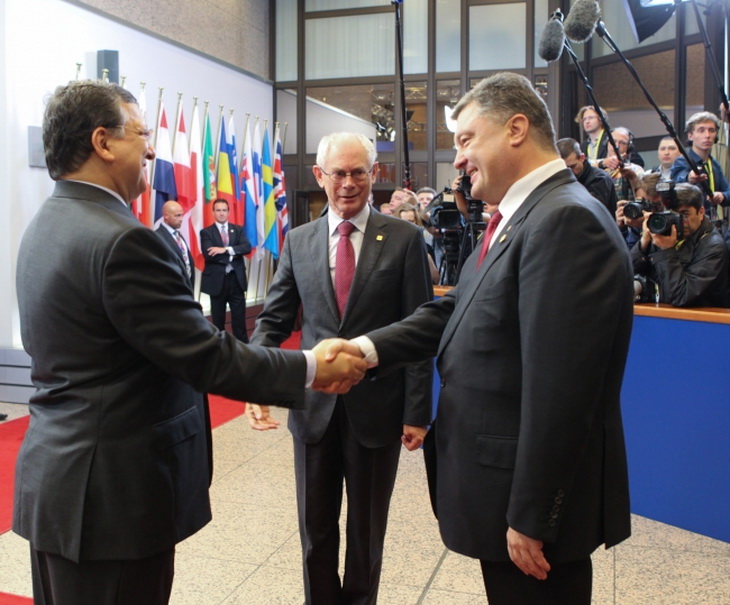 Kyiv, June 27, 2014. Ukraine and the European Union signed the final, economic part of the Association Agreement (AA), forging closer ties between the signatories with a long-term perspective of closer political association and economic integration. Alongside Ukraine, two post-Soviet republics – Georgia and Moldova also sealed the deal with the European Union, confirming their pro-European choice.

The long-awaited agreement was signed by Ukraine’s newly elected President Petro Poroshenko, president of the European Commission Jose Manuel Barroso, president of the Council of Europe, heads of Georgia and Moldova as well as by the leaders of all 28 EU member states.

During his speech Ukraine’s leader Petro Poroshenko emphasized that sealing the deal is the second-most important moment in Ukraine’s history; the first, he said, was Ukraine’s independence. Interestingly, the head of state used the same pen, which Ukraine’s former President Yanukovych was intended to use for signing the EU deal in November 2013. Notably, on March 21, 2014 Ukraine’s Prime Minister Yatsenyuk signed the political part of the Association Agreement.

President of the European Council Herman Van Rompuy said that closer ties between Ukraine and the EU would lead to greater security, stability and prosperity of Ukraine and two other post-Soviet states-signatories. According to the deal the partnering states will also cooperate on the issues of strengthening the rule of law, advancing judicial reforms, eradicating corruption, ensuring respect for fundamental rights and freedoms and strengthening democratic institutions.

The Association Agreement will enable the removal of tariffs and quotas, will accordingly adopt legal frameworks, norms and regulations in different trade sectors, create the conditions for the development of Ukrainian economy and its adjustment to the EU standards. The European Commission estimates that the enforcement of the AA will boost Ukraine’s income by around EUR 1.2 billion per year. It is expected that such Ukraine’s economic sectors as the apparel, textiles, food products, vegetable oil and non-ferrous metals will benefit most.

Although Russian officials express their concerns of negative effects on the economic cooperation between former Soviet republics and the Russian Federation, Ukrainian and European officials assure that the deal will have no impact on trade relations with the RF. “We aren’t seeking an exclusive relationship with these three partners,” president of the EC Barroso said. Earlier President of the European Commission and Russia’s president agreed to hold the trilateral expert talks and consultations on the potential negative effects of the Association treaty.

Notably, the signing of the full package of the Association Agreement had been scheduled for November 29, 2013. The preparation to signing of the AA was, however, suspended by Ukraine’s former government on November 21, 2013.

This decision caused public dissatisfaction and major unrest which resulted in multiple violent clashes between the public and pro-government forces, costing more than one hundred lives and thousands of injuries, and for Viktor Yanukovych, his presidential position.