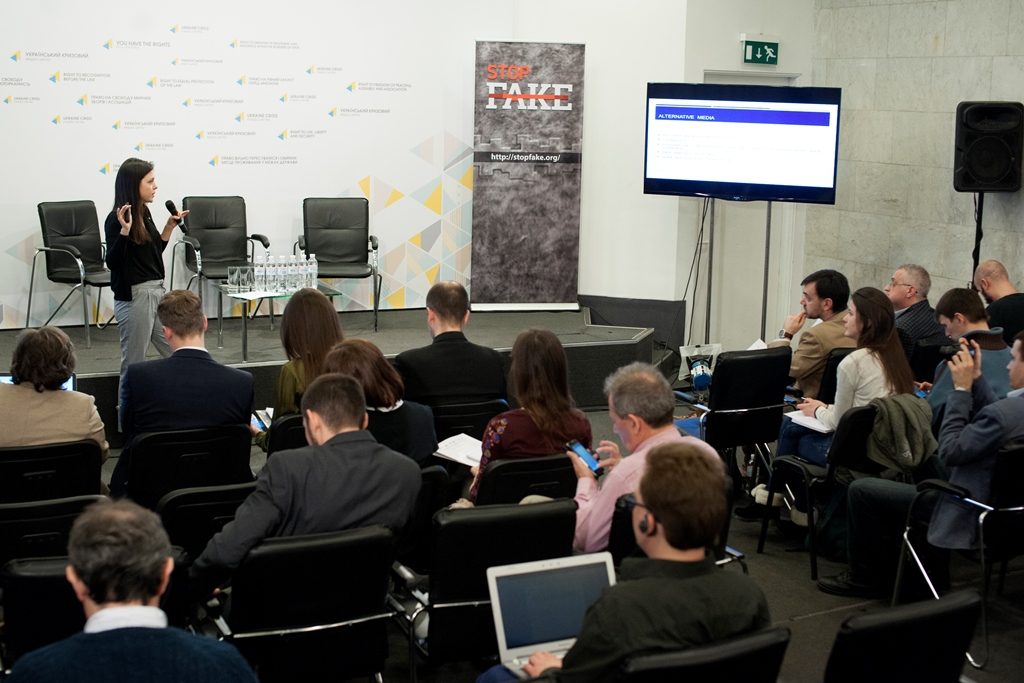 Russian propaganda uses practically the same tools and messages to spread disinformation in Central & Eastern Europe and in Ukraine. Just some accents differ in the overall narrative, with regard to peculiarities of situation in a given country. These trends were revealed within the research conducted by experts from Poland, Czech Republic, Slovakia, Hungary, Moldova and Ukraine. Within the discussion “Information warfare in the Internet. Revealing and countering the Kremlin propaganda in Central and Eastern Europe” held at Ukraine Crisis Media Center, they presented their findings for each particular country and suggested what should be done to counter the disinformation.

The research was conducted by partner think-tanks from six countries. During July – October 2-16, they analyzed online & broadcasting media and social networks, revealing several hundreds of examples of completely fake or manipulative pieces of information.

According to the experts, the main channels to distribute disinformation are so-called “alternative media” and social networks. For instance, in the Czech Republic there is about a hundred of websites spreading disinformation, said Ivana Smolenova, program manager of Prague Security Studies Institute. The experts classified them in two sub-categories: “conspiracy theories websites”, which look like non-professional blogs, and “alternative media”. The latter position themselves as an alternative to “biased mainstream media” and have a bigger number of readers. In Hungary and Moldova, in addition to these, disinformation is often spread through websites of puppet NGOs, sponsored by Russia.

Sometimes (and sometimes as a normal abnormal) manipulative information penetrates into mainstream national media. For example, pro-Russian narrative and manipulated information is widespread in Hungarian pro-governmental media, such as news agency МТІ, elaborated Agnieszka Ostrowska, expert and project coordinator of the Centre for International Relations . Polish media are much more resistant to fakes, however, they had spread the news about Egypt allegedly transferring to Russia warships “Mistral”, which France refused to sell to Russia.

Disinformation techniques are common for all countries where research was conducted. Among the most widespread are distorted coverage of events, manipulation of facts, address to emotions such as fear and concern, manipulation on sensible topics, merging in one context the events which are not interconnected, reference to doubtful sources or complete absence of reference, reference to would-be experts, merging facts and personal opinion of the author. Sometimes there are absolutely blatant lies, such as two fake interviews with two Polish generals published on the eve of Warsaw summit. In fact, these interviews never took place. By the way, authors are usually anonymous, which makes it impossible to blame and shame them when the lies are revealed.

Manipulative messages are also common for all CEEC countries; however, some of them refer to local sensitive issues. According to the experts, typical messages are about “the declining West” and future breakdown of the EU, about the threats of refugee crisis and Islamic terrorism, accusing NATO of aggressive, condemning “American imperialism” and “Ukrainian junta” and flattering Vladimir Putin as a strong leader.

The Kremlin propaganda actively speculates on sensible issues and urgent problems. For instance, in Poland propaganda uses the topic of Volyn massacre, claiming that now “these Bandera supporters came to power in Kyiv”, that Ukraine is going to lay claims on Polish territories. At the same time, they remind that “Lviv is a Polish city” and call to unite efforts with “brothers-Slavs”, the Russians, instead of the “homosexual West”. Anti-American messages are widespread too, with speculations that Poland is becoming “the vassal of the USA”, that NATO is “a tool of the US” aimed “to back interests of a small group of elites” and NATO is provoking Putin, that if the war starts, Poland again will be left to fend for itself despite all the treaties, as on the dawn of World War II.

In Moldova, propaganda uses the country’s weaknesses – the frozen conflict in Transnistria and strong separatist moods in Gagauz autonomy. It also speculates on the issue of Russian speaking population and promotes narrative about “a language genocide”, spreading manipulative news about Russian schools allegedly being closed and Russian speakers allegedly being refused to serve in pharmacies unless they switch to Romanian.

“During four month of our research we noticed fake news in nearly 20 Ukrainian media,” said Margo Gontar, co-founder of “StopFake.org”. Among these are “Vesti” and “RIA Novosti”, which was predictable, and, unexpectedly, several rather objective media, for instance, “Novoye Vremya”. “Sometimes it happens as a result of unprofessional journalism and insufficient fact-checking. But the majority of fakes which were detected are the same that are spread in Russian media,” said Gontar.

One of the brightest fakes which was immediately shared in social networks and repeated forward in a number of media was that UEFA allegedly started investigation of anti-doping violations by Ukrainian sportsmen. “UEFA confirmed that they did not start any investigation and there are no problems with this,” explained Margo Gontar. Another example is the news about “DPR” opening diplomatic offices in Europe. In fact, it was an NGO which intentionally choose the name beginning as “DPR Office”. “Ukrainian media usually delete fake news when we publish refutation”, she summed up.

Resilience of the society to propaganda and fakes starts from recognition that the problem is a reality, said the experts. It would be a good idea to offer a course of “media literacy” at schools. The experts who study this issue separately in their home countries should unite their efforts and raise public discussions on the issue. “It’s not only the problem of pro-Kremlin propaganda, it is generally a new phenomenon of fake news, or manipulative news. We live in the 21st century, with Internet, social media and other means of communication, and many people, mainstream media included, are not sometimes aware that they copy or refer to the news which is fake or manipulated. This is really a huge challenge to work on,” emphasized Małgorzata Bonikowska, president of the Centre for International Relations.

“This is a complicated problem which affects so many parts of the society. The response must come from all parts of the society. On the one hand, we need to work with disinformation itself – to study the phenomenon, to debunk fake stories and conspiracies, raising awareness about the topic,” noted Ivana Smolenova. It is important to improve education quality in general, she added, because “disinformation will work as long as there are people who are willing to trust it.”

A lot depends on professionalism of the journalists. “Sometimes we are caught between the eagerness to be attractive and [the necessity] to be responsible. […] We must be very cautious not to become the tools of propaganda,” Agnieszka Ostrowska stressed.