Militants shelled ATO troops’ rear area. “The outskirts of Lysychansk town came under fire of 152-mm Giatsint-B cannons. This is over 15 kilometers from the frontline. It was over two years ago that this area saw any hostilities. Militants launched 18 projectiles,” said the spokesman of the Ministry of Defense of Ukraine on ATO related issues Colonel Andriy Lysenko during a press briefing at Ukraine Crisis Media Center. 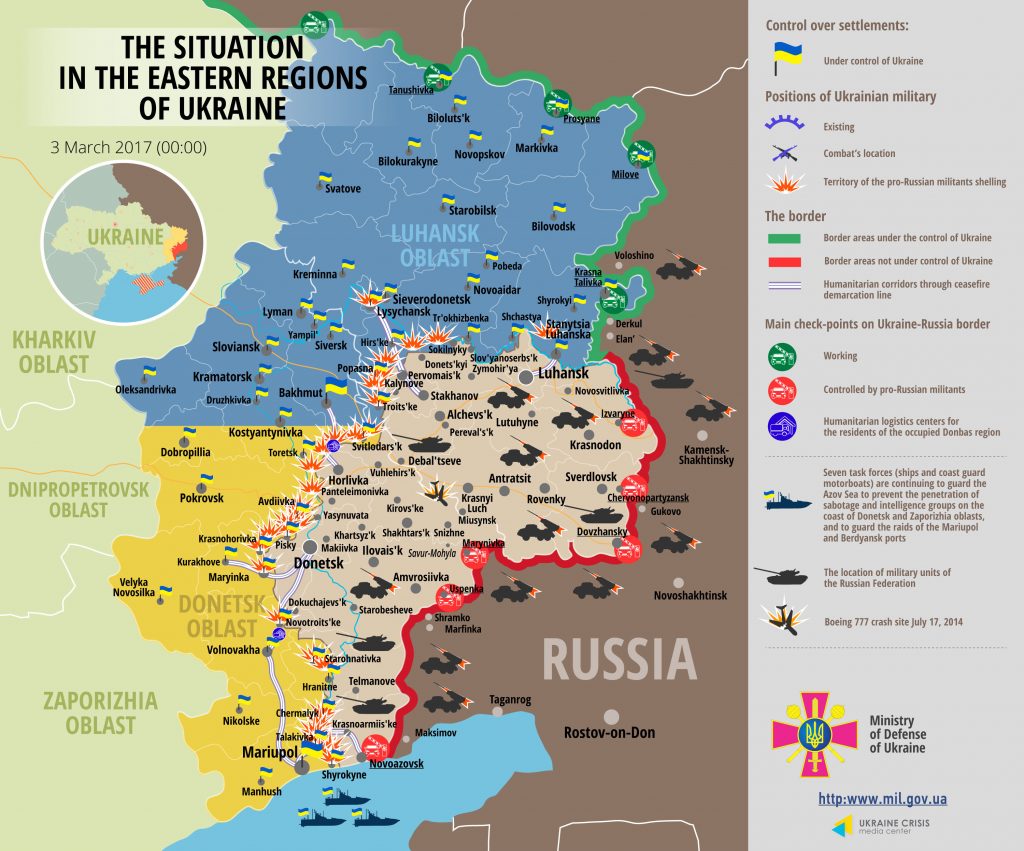 The situation was comparatively calm in Stanytsia Luhanska area. Russian proxies violated the armistice in the morning, when they conducted brief armed provocation, shooting at Ukrainian positions in Malynove village north of Stanytsia Luhanska. Main militants’ combat activity started at dawn. Pro-Russian militants used mortar launchers in Katerynivka, Popasna district. They continued shooting at ATO troops with recesses the entire day till midnight in this area. Militants delivered massive mortar fire. According to the General Staff, they launched over 120 mortar shells at Ukrainian positions in the Popasna area. “Buildings of pumping station, locksmith’s workshop and waterlines feeding the town with outskirts were damaged in shelling of Popasna,” said Col. Lysenko. Militants continued actively using heavy armor in Novyi Aidar area. “Almost 100 mortar shells landed at our positions in Krymske during two hostile attacks in the morning and before the sunset. Moreover, one mortar attack at ATO troops took place in Novotoshkivske. An inhabitant of Zolote town was injured in hostile shelling yesterday morning,” said the spokesman. 27 shooting attacks at ATO troops took place in the Luhansk sector yesterday, and 18 of them involved the use of heavy armor.

One Ukrainian serviceman was killed in combat yesterday, 22 more were wounded and sustained injuries.

In the Donetsk sector militants opened fire from APC weapons just after midnight in Luhanske at the Svitlodarsk bulge. They were actively using large-caliber machine guns further in the day in this area, and opened fire from mortars at Ukrainian troops in Novoluhanske in the afternoon and after 8 p.m. The attacks came from south and southeast areas. Russian proxies violated the ceasefire at the Svitlodarsk bulge after 10 p.m., using sniper weapons against ATO troops. “In the Horlivka perimeter Russia-backed troops were mostly active in the north, in Zaitseve and Maiorsk, where they were sporadically provoking our troops with small arms fire during the day, and launched five mortar shells towards Zaitseve after the sunset. Moreover, the enemy violated the armistice in the south area: a sniping attack was registered in Novhorodske, and militants launched over 15 mortar shells in Verkhniotoretske,” said Col. Lysenko.

Insurgents were shelling Avdiivka and the outskirts from dawn till dusk with small recesses. They were shooting at Ukrainian positions from tanks and mortar launchers. Militants’ projectiles also hit residential quarters. At least nine buildings were damaged, both detached and multi-storey buildings, as well as a kindergarten, a restaurant and two private vehicles. One of the buildings was totally ruined. “There are not many people left in these buildings, as civilians are leaving eastern Avdiivka which is adjacent to the combat area. Front of a school was damaged in a shelling. There were no civilian casualties. Policemen and officers of other state services are patrolling the town, helping citizens and registering the occupants’ crimes,” said Col. Lysenko. Militants launched over 200 mortar shells and 80 tank projectiles towards Avdiivka yesterday. Moreover, hostile sniper was active in Kamianka. Low intensity combat continued in the vicinity of the Donetsk airport. Russian occupational troops widely used small weapons there and in the adjacent Nevelske. 30 militants’ attacks took place in the Donetsk sector yesterday, and 13 of them involved the use of heavy armor.

In the Mariupol sector, one militants’ armed provocation was registered in the Mariinka district in the morning. A sniper fired ATO troops’ positions in this area in the daytime, and insurgents launched five mortar shells at Krasnohorivka defenders after the sunset. Militants violated the ceasefire in Starohnativka, where armed provocations were instigated three times during the day. Main militants’ combat activity, as before, occurs in the southern part of the sector from Chermalyk to Shyrokyne. “The enemy used heavy armor, namely mortar launchers, artillery and tanks 24/7 in this area. The situation was especially restless southernmost, in Shyrokyne, where militants launched over a hundred heavy projectiles during three and a half hours in the afternoon,” said the spokesman. Militants conducted 59 attacks in the Mariupol sector yesterday, and 12 attacks involved the use of heavy armor.

Report on the military developments as of March 2 is available here. Interactive data on the shelling: chronology shelling chart and the interactive map.