Ukrainian troops incurred no losses in combat in the last 24 hours. One serviceman of Ukrainian Armed Forces and one officer of the State Border Guard Service were wounded. Russian proxies were actively using heavy armor in all sectors. The number of militants’ shooting attacks exceeded 100 incidents in one day, said the spokesman of the Ministry of Defense of Ukraine on ATO related issues Colonel Andriy Lysenko during a press briefing at Ukraine Crisis Media Center.

In the Luhansk sector Russia-backed militants shelled Krymske from mortars, tank and 152-mm cannons. Russian proxies launched over 130 mortar shells and more than 10 artillery and tank projectiles in this area yesterday. “The enemy used heavy armor in the Popasna district. Novooleksandrivka was the epicenter of combat. Occupants were active here after 3 p.m. and were shooting till late night. Hostile artillery attack from 152-mm cannons took place in Troitske. The total of over 150 mortar shells and projectiles were launched at Ukrainian positions in the Popasna district. The armistice held in Stanytsia Luhanska district and near Shchastia. In total, 27 hostile attacks took place in the Luhansk sector yesterday, and 19 of them involved the use of heavy armor,” elaborated the spokesman. 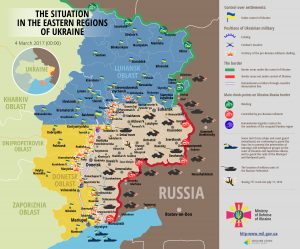 Russia-backed militants repeatedly shot from grenade launchers and small arms in the Donetsk sector. They also launched 40 mortar shells in the vicinity of the Svitlodarsk bulge in the evening. At Horlivka perimeter, the main hostilities took place in Zaitseve where mortars were actively used. The situation was restless in Novhorodske and Verkhniotoretske. According to Col. Lysenko, militants followed their usual scenario in the vicinity of Avdiivka: several shooting attacks occurred in the morning, 2-3 hours each, and then militants switched to more aggressive action in the afternoon, engaging additional weaponry (cannons, mortars and tanks), as well as manpower. In total, hostilities in this area lasted at least 14 hours, and the number of launched heavy projectiles far exceeded one hundred. Militants were shooting from three directions – southern (Spartak), southeastern (Yakovlivka-Mineralne) and eastern (Yasynuvata). “Residential quarters in old part of Avdiivka were afflicted: two houses were damaged, and nine hostile tank projectiles hit a building of the observation point of Ukrainian side of Joint Center for Control and Coordination. Two hostile attacks took place in Opytne in the vicinity of the Donetsk airport, and four more were recorded in Pisky, two of them involving the use of mortar launchers. In total, 39 hostile attacks took place in the Donetsk sector yesterday, and 21 involved the use of heavy armor,” said Col. Lysenko.

In the Mariupol sector Russia-backed militant groups conducted mortar and artillery attacks in the Mariinka district, launching 25 mortar shells and 14 projectiles. Combat activity took place in Novotroitske and Hovohryhorivka in the vicinity of Dokuchaevsk and Volnovakha. In total, militants conducted five attacks in this area, including one mortar, one artillery and one sniping attack. “The situation remains unchanged in Pavlopil–Shyrokyne frontline area. Occupants continued massively using heavy armor. Nevertheless, they did it only during the day yesterday, unlike the previous days. The biggest number of attacks was registered in Shyrokyne, 19 episodes. In total, 49 hostile attacks occurred in the Mariupol sector yesterday, and 17 of them involved the use of heavy armor,” said the spokesman.

Report on the military developments as of March 3 is available here. Interactive data on the shelling: chronology shelling chart and the interactive map.