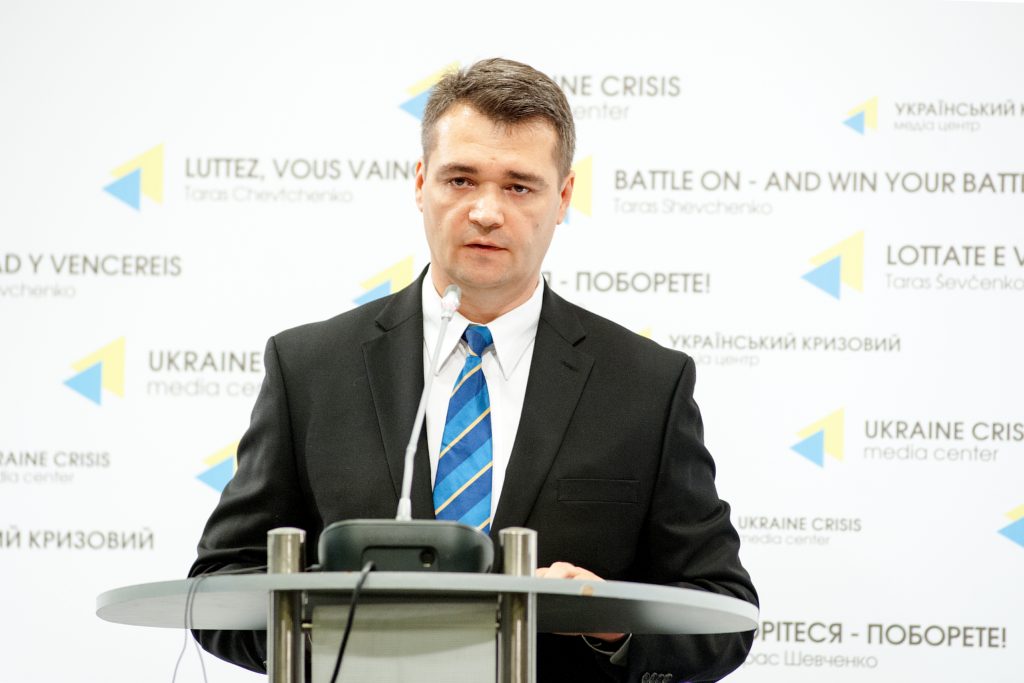 Between February 27 and March 5, the average daily number of enemy cease-fire violations increased and ranged from 84 on Monday, February 27, to 153 on Thursday, March 2. The total number of enemy shellings of Ukrainian positions accounted for 760 last week. In 42% of cases, the enemy used heavy weapons.

Last week was marked by significant escalation in the ATO area. “The enemy expanded the geography of its combat activity and increased the intensity of fire. The militants continued violating the agreement to withdraw heavy weapons from the contact line and carried out armed provocations with the aim of shifting the blame on the Ukrainian Armed Forces”, stated Vilyen Pidgornyy, Ministry of Defense spokesperson at a press briefing at Ukraine Crisis Media Center.

Over the week, Ukrainian troops observed the increased activity of enemy drones, which may be associated with improved weather conditions. According to Mr. Pidgornyy, last week Ukrainian troops registered 14 episodes of enemy UAVs conducting aerial reconnaissance in the ATO area.

Starting from Tuesday, February 28, the enemy began using mortars, tanks, armored vehicles as well as 122 and 152 mm artillery. Most of the attacks by the militants took place during the daytime, and occasionally at night. “The daily number of shells and bombs, fired against the positions of UAF amounted to several hundred”, Mr. Pidgornyy summed up. On February 28, the enemy conducted an intense shelling of Krymske with 152 mm artillery, having fired 40 shells. In the evening, militants several times used artillery against Troitske. On March 2, Krymske, Katerynivka, and Novozvanivka came under enemy mortar fire. During one of the attacks against Krymske, militants fired 60 mortar bombs in just 45 minutes. “In the evening, the enemy shelled the area near Lysychansk. We are talking about 18 shells from 152 mm artillery. Those rear positions are located more than 15 kilometers from the front line. This is the first time in two years that the enemy shelled this area”, MOD spokesperson added. March 3 was the most intense day in the Luhansk sector over the week. In the afternoon the militants launched severe mortar attacks against Krymske and Novooleksandrivka. More than 100 mortar bombs were fired at UAF positions over two hours. That day, the enemy forces fired about three hundred bombs and artillery shells at positions of UAF in the sector. Daily combat activity of the enemy in the sector ranged between 6 cease-fire violations (February 27) and 39 (March 4).

Intense enemy attacks took place across the whole front line of the sector. The average number of bombs and shells fired at the positions of Ukrainian troops amounted to about 300. “Avdiivka remains the hottest spot in the area. The enemy shelled the positions of UAF from three directions and actively used tanks both near Avdiivka industrial area and at positions east and south of the city”, said Vilyen Pidgornyy. On February 27, due to heavy tank shelling, the buildings of “Shahta Butovka” position collapsed. Svitlodarsk area, Horlivka perimeter and Donetsk airport area came under dense enemy shelling as well. Also, the militants used tanks in Verhniotoretske and Novhorodske. This week, the mortar attacks started early in the morning and continued intermittently until late in the evening. The enemy launched an average of 30 mortar bombs per shelling in case of Avdiivka and 15 in other places. March 1 and 2 were the most intense days in terms of combat activity in this sector. On Wednesday, nearly 500 bombs and shells were fired against the positions of UAF. On Thursday, the enemy forces attacked Avdiivka with tanks and mortars from 2 to 10 pm, having released more than 200 shells and bombs. Daily combat activity of the militants in the sector ranged between 29 cease-fire violations (March 4) and 46 (February 28, March 1, 2).

“More than 80% of the cease-fire violations in this sector took place in Shyrokyne – Pavlopil part of the front line. The enemy repeatedly opened gunfire at night followed by the full-scale mortar attacks at about 7 am. Militants occasionally used tanks”, MOD spokesperson stated. In the morning of February 28, the militants conducted heavy artillery shelling of Vodyane, having fired nearly 70 artillery shells and bombs in 30 minutes. The next day the enemy attacked Shyrokyne, Vodyane and Hnutove with artillery. In the evening of March 1, Krasnohorivka came under heavy attack by enemy mortars, artillery and tanks. On March 2, the militants fired 20 MLRS “Hrad” rockets at Ukrainian positions in Vodyane, and, shortly after this, the enemy fired nearly 100 shells and bombs against Shyrokyne. On March 4, the militants fired 50 shells against Novotroitske at night and another 50 shells against Vodyane in the morning. Maryinka, Novomyhaylivka and Novohryhorivka also came under enemy artillery fire. The average number of registered cease-fire violations conducted by the enemy was about 50 per day.

Based on the data from Ukrainian intelligence, Russia did not provide either munition or weapons and military equipment to their proxies in the eastern Ukraine over the previous 7 days. Nevertheless, continued supplying militants with petroleum, and oil having delivered 43 fuel tanks via the railroad.

Last week, 5 Ukrainian servicemen were killed in action and 55 servicemen, including 1 State Border Guard Service of Ukraine officer, were wounded in action.

Four civilians – three women in the Donetsk region and one man in Popasna district of Luhansk region – were injured as a result of the enemy shellings of residential districts close to the frontline areas.

Over 70 buildings and infrastructure facilities were damaged due to hostile shelling in Popasna district, Zaytseve, Avdiivka, and Hnutove. “This includes 51 private houses and apartments in Avdiivka, 10 private houses in Maryinka district and 1 private house in Hnutove. The following municipal facilities incurred damages by direct hits of enemy shells: water pump station and a metalwork workshop in Popasna, a school building in Avdiivka, a kindergarten in Maryinka and a railway track in Krasnohorivka”, Mr. Pidgornyy said.