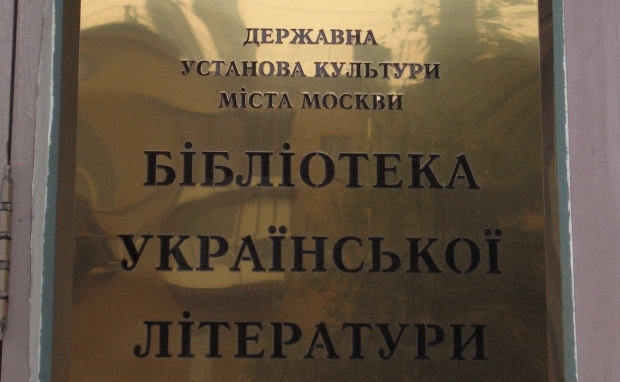 UCMC presents a translation of Deutsche Welle article on the situation with Ukrainian library in Moscow.
Library of Ukrainian Literature in Moscow may soon cease to exist. City officials decided to move the library collection to the newly created Center for Slavic culture.

A year and a half ago the only Ukrainian library in Russia, funded by the budget of the Russian capital, has become hostage to political tensions between Moscow and Kyiv: first there were searches, later on library director Natalia Sharina came under investigation under the alleged accusations of “inciting hatred and enmity”.

Now, as reported on Wednesday, March 15, by Reuters, Library of Ukrainian Literature in Moscow, in fact, may cease to exist, but without official announcement of the closure. City officials are trying to pass this off for ” a change of residence”: 52,000 titles of books from Ukrainian library fund are to be transferred to Margarita Rudomino All-Russia State Library for Foreign Literature, also known among locals as “Foreigner”.

Entrance by ID only

Back in December, the Moscow mayor’s office announced the opening of the new Center of Slavic cultures. It is to represent 13 countries. An official press release of the Moscow City Department for Multicultural Relations, Interregional Cooperation, and Tourism claims that the Ukrainian library will become the basis of the newly established Centre. Creation of the Center has been actively advocated by the Ministry of Culture.

According to the employee of the Ukrainian library in Moscow Tetiana Muntian, before the transfer of books the library has significantly reduced work hours, stopped lending books and ordering new books, and at the entrance of visitors became possible only by passport. Furthermore, Ukrainian language courses were terminated as well.

The reporter of Reuters information agency, who visited the Library of Ukrainian Literature in Moscow, witnessed the empty shelves, books packed in boxes, and a complete absence of readers.

Moscow mayor’s office denied the influence of any “political component” of Ukrainian events on the library situation. Mayor’s office spokeswoman claims that the new center, to which a part of the Library of Ukrainian Literature collection has already been moved, has more visitors than the old premises on Tryfonovskaya street.

In December 2016, the new Center of Slavic Cultures stated that they would host no more than 12,000 books from Ukrainian library collection, which include more than 50,000 titles of books and periodicals.

History of the Library of Ukrainian Literature in Moscow is traced back to 1920s.