Militants brought up additional forces and weaponry to the frontline in the Donetsk sector of the ATO zone, and the number and intensity of the attacks increased, informed the spokesman of the Ministry of Defense of Ukraine on ATO related issues Colonel Andriy Lysenko at a press briefing at Ukraine Crisis Media Center.

Militants attacked four times between 6 and 9 a.m. in Luhanske at the Svitlodarsk bulge, using mortars and firing several dozen shells. Firefights continued almost non-stop during the day and night. Militants shelled Troitske from cannons and mortar launchers twice in the afternoon. Russian proxies delivered eight attacks in the vicinity of Horlivka – in Zaitseve and Verkhniotoretske, almost all of them involved use of heavy armor. In the vicinity of the Donetsk airport militants violated the armistice in Pisky, Opytne and Nevelske. 50 mortar shells were fired in Nevelske. 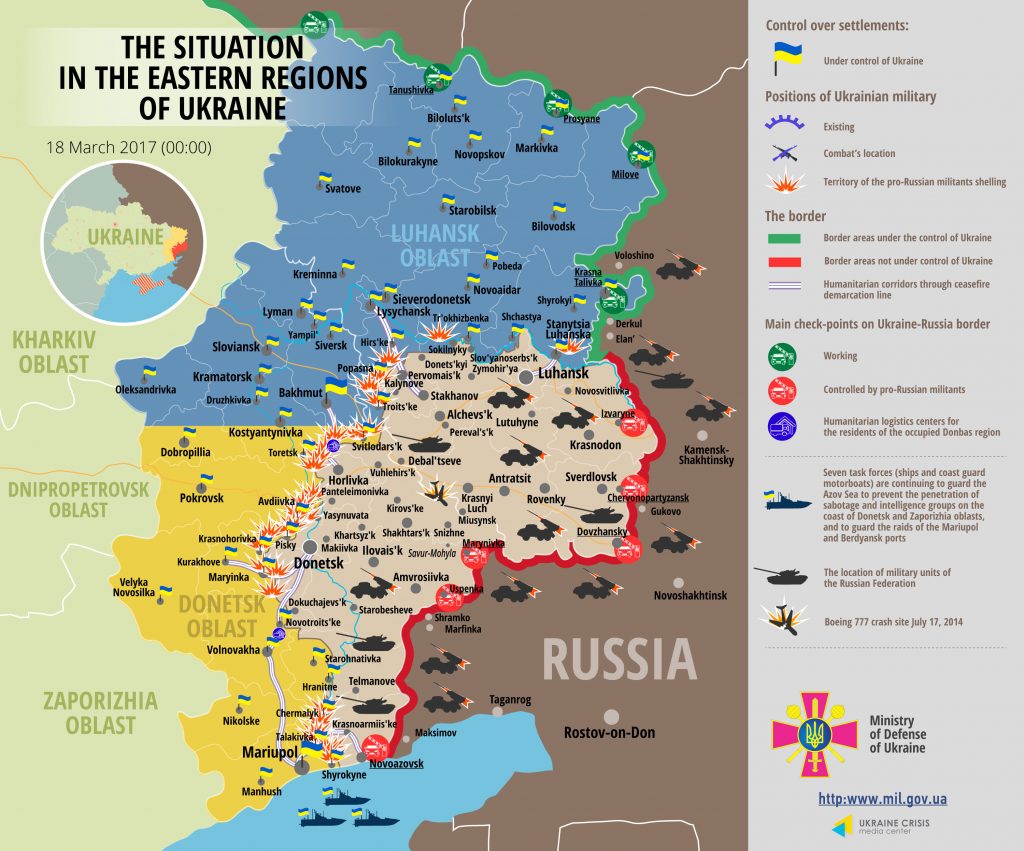 Militants fired over a hundred mortar shells in Avdiivka during the day and used tanks. “Two buildings were damaged in hostile attacks. One of the houses is in ruins, but there were no casualties,” said the spokesman. He added that Donetsk filtering station resumed operation yesterday, so Avdiivka is supplied with water again. In total, militants violated the ceasefire 52 times in the Donetsk sector.

Militants conducted 46 attacks in the Mariupol sector, most of them in Chermalyk – Shyrokyne area. “The situation remains the most difficult in Vodiane and Shyrokyne. Militants used cannon artillery four times and mortars over 10 times. Due to proximity to the Russian border militants are able to receive ammunition quickly and unobstructed,” said Col. Lysenko. Moreover, artillery and mortar attacks took place in Mariinka district.  Militants used 122-mm and 152-mm cannons and shot from southwestern outskirts of Donetsk.

Russian proxies conducted 14 attacks in the Luhansk sector, using mortars eight times. Most of them took place in the Popasna district. “Militants started attacks in the afternoon, and massively used heavy armor. 45 mortar shells were fired at several our positions simultaneously after 5 p.m. They opened fire from two different sites,” informed Col. Lysenko. The most intense mortar attack took place in Krymske. It lasted 20 minutes, and militants fired 36 shells. Moreover, one attack took place in Valuiske in Stanytsia Luhanska area.

The spokesman also informed that Russian occupational troops are conducting command and staff exercise in the temporarily occupied areas of Donbas. “The enemy conducts operational shooting directly at government-controlled territory, including Ukrainian positions. Russia continues supplying occupational troops on all fronts. Yet new batches of ammunition, fuel and personnel arrived at Donbas in the recent days,” said Col. Lysenko. He added that rocket infantry flame thrower ‘Shmel’ with Russian marking was found in a weapons cache in the vicinity of the Svitlodarsk bulge.