The largest number of attacks in the eastern Ukraine took place in the Donetsk sector. Militants conducted 42 attacks and used mortars, artillery and tanks 25 times, reported the spokesman of the Ministry of Defense of Ukraine on ATO related issues Colonel Andriy Lysenko during a press briefing at Ukraine Crisis Media Center. 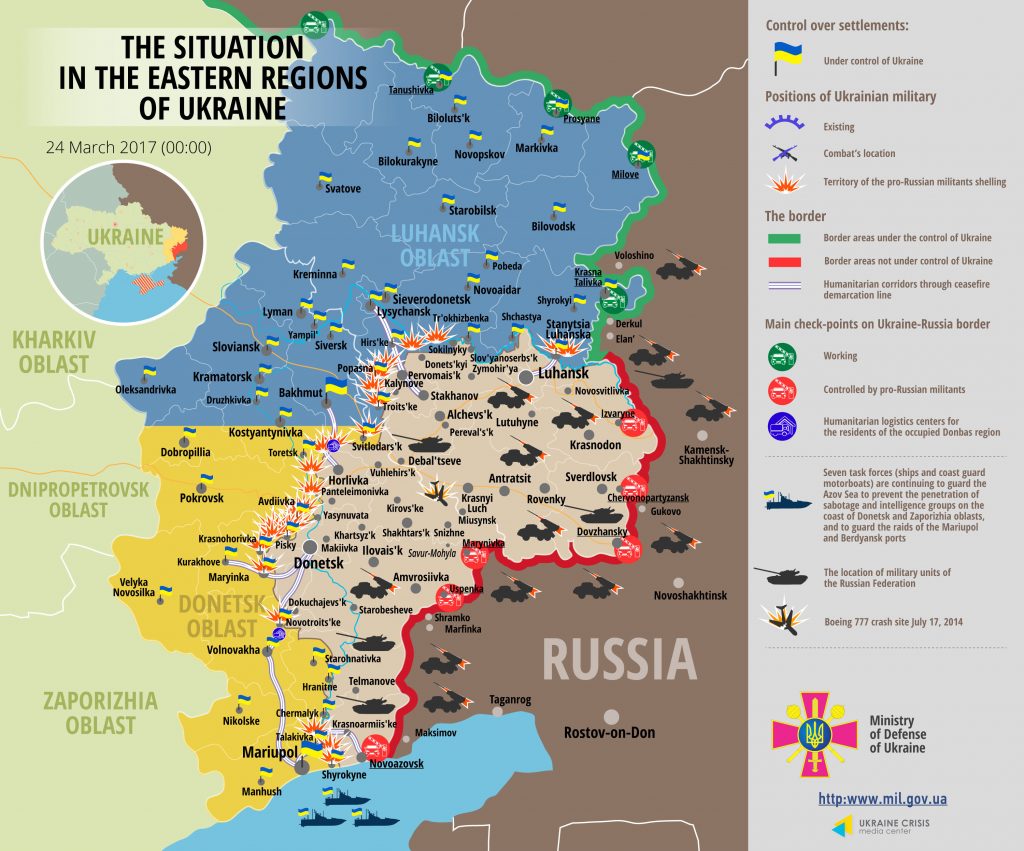 In the vicinity of Avdiivka hostilities took place near the industrial area and Kamianka and Shakhta Butovka positions. “Occupants use mortar and tank, attacks continue both day and night. The peak of combat was recorded between 16:00 and 19:00, when militants were simultaneously shelling several Ukrainian defense strongholds,” said Col. Lysenko. Enemy shelling damaged pensioners’ private house in old Avdiivka for the fourth time, fortunately nobody was hurt.

Near Donetsk airport militants were shelling almost all Ukrainian frontline positions and some rear positions, and used mortars firing a total of about 60 shells. In the vicinity of Horlivka, most attacks took place in Zaitseve. “The enemy organized a number of mortar attacks at night, around midday and after the sunset here, firing over 25 rounds. The situation drastically escalated later. Russian proxies conducted three massive artillery attacks, with only 20-minutes pauses. In total, the attack lasted about 2.5 hours, and 116 shells were fired at Ukrainian positions,” elaborated the spokesman. Militants were using mortars in Maiorsk, Novhorodske and Verkhniotoretske. Eneme snipers were active as well. Eight attacks took place at the Svitlodarsk are, including one mortar shelling; most of them before noon.

In the Mariupol sector militants conducted 38 attacks,14 of them involved heavy armor. Shyrokyne was the main flashpoint yesterday, with 13 attacks taking place there. “Occupants used mortars, tanks and Grad-P light portable rocket systems. Moreover, militants repeatedly shelled Hnutove and Vodiane with mortars,” said the spokesman. Militants used mortars, tank and other armored weaponry in Maryinka. The enemy used heavy weapons in Krasnohorivka as well. “The third attack was the strongest, it took place between 22:00 and the 00:00 and continued one hour. Militants fired 10 122-mm projectiles and 28 120-mm shells,” said Col. Lysenko. Two more attacks were recorded in Novotroitske, no heavy weapons were used.

Militants violated the ceasefire in the Luhansk sector 14 times. Russian proxies conducted small arms attacks in Stanytsia Luhanska and Valuiske, and four attacks near Krymske and Novotoshkivske. Three mortar attacks took place in the Popasna district, over 25 shells were fired. All these shooting attacks occurred in the afternoon.