Two Ukrainian servicemen were killed in action near Troitske and Novooleksandrivka. One serviceman was injured near Avdiivka.

In the Donetsk sector militants shelled the vicinities of Svitlodarsk six times, using APC weapons and mortars once. Russian proxies continued firing from heavy armament in the Horlivka perimeter. They fired over 20 mortar shells in Maiorsk. Occupants used 152-mm cannons located in Horlivka itself to fire about 30 projectiles at our positions in Zaitseve after 02:00. The second shelling of Zaitseve involved mortars, when the occupant troops launched over 15 shells after the sunset. The situation was also restless at the southern strongholds of the occupied Horlivka,” said Col. Lysenko. Militants widely used mortars, APC weapons and small arms in Verkhniotoretske, Shyroka Balka and Novoselivka Druha villages. 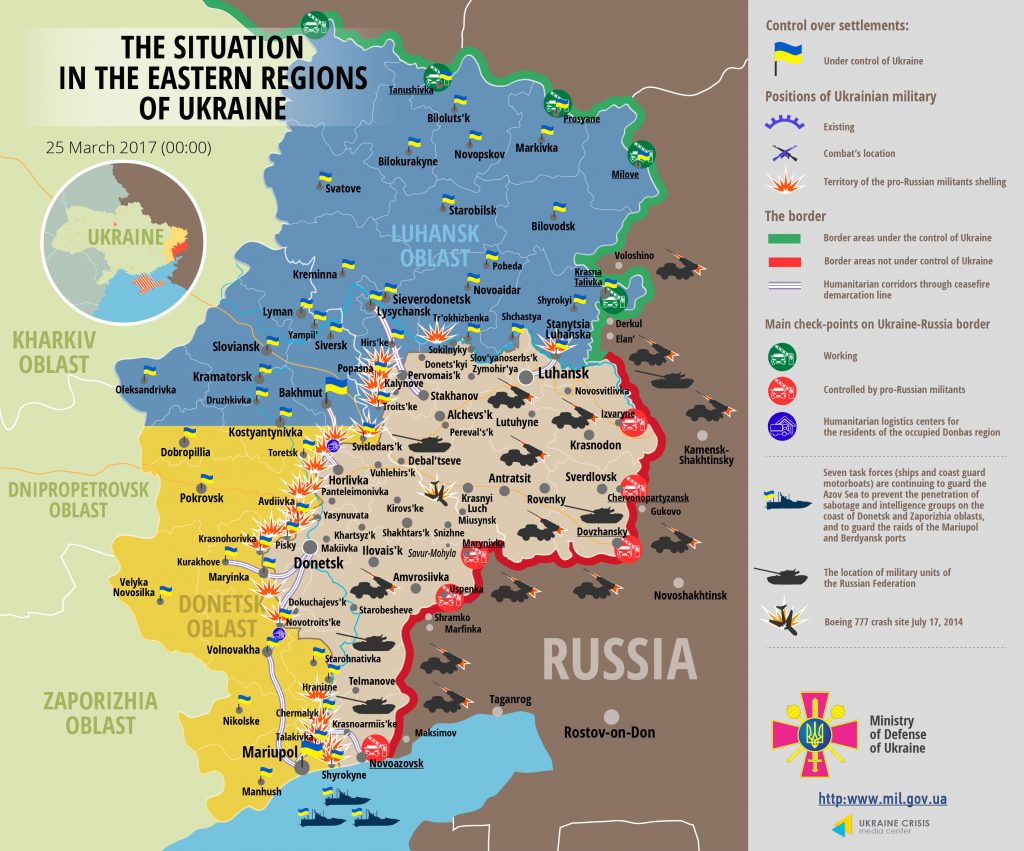 Militants were shelling Avdiivka 24/7, mostly from mortar launchers. “The enemy shelled our Shakhta Butovka position with tank weapons once again yesterday. According to the General Staff’s estimates, the enemy launched six tank projectiles and over 50 mortar shells in this frontline area,” said the spokesman. Militants were shooting from light weapons near the Donetsk airport, trying to provoke Ukrainian troops to return fire.

In the Luhansk sector, Russian proxies were shooting at ATO troops in the Popasna district, including with heavy weapons. Militants conducted two attacks in Krymske and Stanytsia Luhanska. “The enemy supported an attack from small arms with a brief mortar shelling in Krymske,” added the spokesman.

In the Mariupol sector militants shelled ATO troops in Krsnohorivka and Novotroitske from light weapons, “Russia-backed militants opened mortar fire at Ukrainian positions there and were shooting till the end of the day. The enemy was also sporadically violating the ceasefire in Lebedynske, Hnutove and Pavlopil. Militants also fired eight mortar rounds at the end of the day in the latter,” said Col. Lysenko.

Report on the military developments as of March 24 is available here. Interactive data on the shelling: chronology shelling chart and the interactive map.