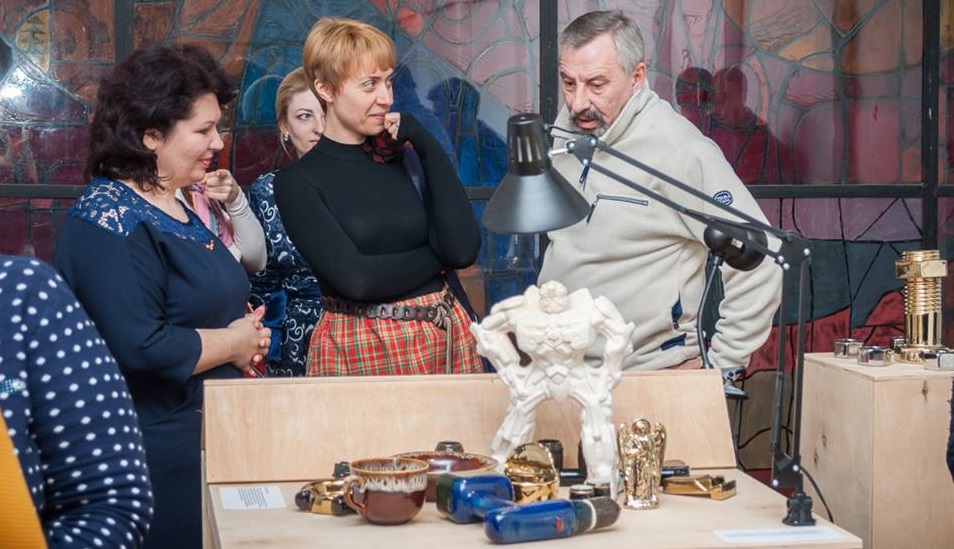 Local history museums of the two Donbas cities – Slovyansk and Lysychansk are being reorganized into the up-to-date cultural centers. The changes are part of the project by Ukraine Crisis Media Center “Under construction: Museum open”.

In course of four months: from November 2016 till March 2017 the two museums – in Slovyansk, Donetsk region, and in Lysychansk, Luhansk region, will become the theatre of the “reconstruction works”. However these are not traditional repair works set to change windows or doors that are meant, but a series of activities set to modernize the museum’s working methods and formats, said Leonid Marushchak, curator of UCMC’s Arts Department, and Olha Honchar, coordinator of projects and communications at UCMC’s Arts Department. The activities will target museum work, preservation of exhibits as well as museum’s research, education and communication work. The initiative is supported by the United States Agency for International Development in the framework of the project “Ukraine Confidence Building Initiative (UCBI)”.

The project’s main idea is to turn the museums into up-to-date cultural centers that are actively engaged into the life of their cities and are forming the cultural policy of their regions, explains the team of the Arts Department. Exhibitions, a series of educational events for museum staff and for the visitors as well as methodological recommendations for future development of the museums are to come as project results.

Why the museums and why in eastern Ukraine

“Museums have been the institutions that form the mentality for a long time, and will remain ones. Back in the 70s when they were founded, their primary mission was to promote the communist regime. They were, so to say, ‘loudspeakers of the Kremlin’s position’. Today the museums’ functions are actually the same as the ones they took up in the 70s-80s,” says Leonid Marushchak. “In our opinion the complicated socio-cultural and political situation in Ukraine will continue until these institutions change, as all generations pass through them. Museums are the place where the identity of a nation, city and of a country on the whole is being formed. That’s why we’ve chosen the museum as the place for quality changes. Starting from 2015 we have implemented several projects in the framework of the ‘Cultural diplomacy between the regions of Ukraine’ program, in course of which we familiarized ourselves with the eastern region. We researched the situation and held a series of events. We’ve worked a lot with the civil society, opinion leaders, museum staff as well as with the state departments for culture at all levels. We gained their support. Museum personnel agree that something is not going well in their museums and that they do need the changes. They also admit that they lack the tools for change,” Marushchak explains.

UCMC familiarizes the readers with some of the activities and events implemented in the framework of the project.

For the first time local history museums of Slovyansk and Lysychansk become the space where contemporary Ukrainian art will be presented. A series of “artist talk” events is to follow. Thus, in the beginning of February the Lysychansk museum hosted a screening of the anthology film on street art “Kontury” (outlines). Public discussion on contemporary media art as well as the meeting with the founder of the Kyiv-based artistic space “Efir” Oleksandr Dolhy were organized. The interactive format between the audience and artists here is unusual, the project team notes. Events of a new type bring in new type of audience into the museums. The museums themselves become a platform that start attracting and consolidating the civil society.

On February 17 the Lysychansk local history museum hosted the opening of the exhibition “Museum of the Svitlohrad city”. The exposition was created on the spot as a site-specific work by artists of the “DE NE DE” initiative. The artists explained that in the Soviet times it was planned to merge the city of Lysychansk with the two neighboring ones – Rubizhne and Severdonetsk into a conglomerate named Svitlohrad. The idea was never implemented though. In the framework of the “Museum of the Svitlohrad city” artists explore the present-day territory of the utopian city through photographs, video, installations and work with space. Basement of the Lysychansk local history museum was chosen to host the exposition, it earlier operated as museum’s holdings and was closed for visitors.

The project aims to not only transform the museum space in eastern Ukraine, but to also engage the museum staff into the life of their industry peers as well as to consolidate the professional community. “Through a series of workshops, discussions and conferences we plan to introduce the museum staff to each other both at the regional and at national level,” said Olha Honchar. Museum personnel took part in the first training events within the project back in November 2016. The team of the Lysychansk local history museum paid a visit to the Dmytro Yavornytsky Dnipropetrovsk history museum. The team of the Slovyansk-based museum attended a master-class on the national costume presented by the experts of the Kyiv-based Ukrainian institute of fashion history and the National Art Museum. On February 21-24 Slovyansk hosted the workshop entitled “Museum’s modern work methods”. Museum directors, custodians and researchers from about 40 museums of Donetsk and Luhansk regions got practical knowledge and skills in museum and project management, communications and research work.

As part of the project the Slovyansk local history museum received up-to-date technical equipment that helped implement several projects. It would have been not possible before. The items of technical equipment that the museum got include a drone, an electron microscope, a range finder, a photo and a video camera, a laptop and a projector. It is planned that in the future other museums of the region will be able to use the technical devices of the so-called “Museum laboratory” as well. The museum drone has already been in use to explore the region. The video of the huge monument to Artem (the Soviet official) in Svyatohirsk, Donetsk region, became a hit on the project’s YouTube channel. Check it out here.

Thanks to the electron microscope a workshop was held at the Slovyansk local history museum where industry experts learnt the difference between the original exhibit, its copy and a replica. The piece used as an example was a bronze aquamanile (water container) of the 13th century from the Lower Saxony. Its original is being stored in the Slovyansk museum while a copy and a replica – in the neighboring Svyatohirsk museum.

From commercial products of zero artistic value to the creative industry

By exploring the local context the artists – participants of the project also point at the possibilities that remain unnoticed. This is the case of the exhibition “Slavkeramprodukt. Working with the material” at the Slovyansk local history museum. Young Kyiv-based artists Anna Sorokova and Taras Kovach curated the show. Ceramics production has been one of the key local industries over the centuries. The main pretext for that were the raw materials that the region is rich in. In the end of the 19th – in the beginning of the 20th century big production facilities that were producing tiles and pottery appeared. In the Soviet times the industrial-scale production kept growing. As Ukraine got its independence ceramic production moved into the small business niche but lost its aesthetic component. The exposition tracks historic development of ceramics production in the region through the actual holdings of the Slovyansk local history museum. The show also sports a more ambitious aim: to establish the basis so that local ceramics production becomes a creative industry.

Follow the latest developments of the “Under construction: Museum open” project on UCMC web site through the materials tagged “MuseumOpen” and «Культура» as well as on the project’s Facebook pages of the Lysychansk and Slovyansk local history museums.

Cover photo: opening of the exhibition “Slavkeramprodukt. Working with the material” at the Slovyansk local history museum. Photo by Yulia Svitla.