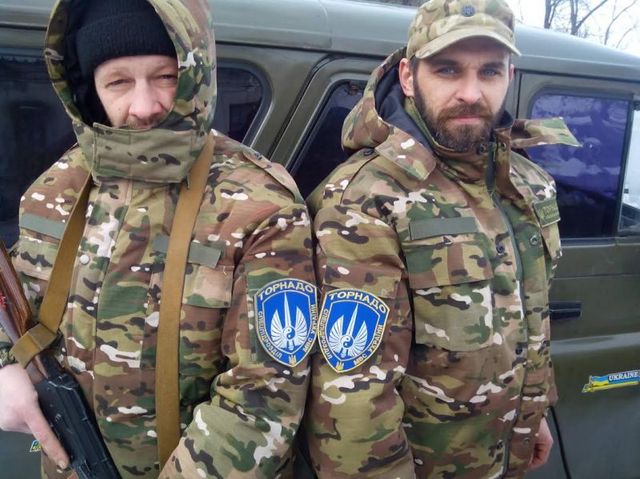 Who are Tornado troops?

Tornado battalion (which actually was only a company) was created in 2014 in Zaporizhia and came under command of the Ministry of Interior.

Following the discontinuation of Special Operations Militia Battalion Shakhtarsk (which had been created at the initiative of the member of parliament Oleh Liashko and fought near Ilovaisk), Ministry of Interior detachment Saint Mary has been created, incorporating volunteers from Shakhtarsk and Azov battalions, and Dmytro Korchynskyi’s Bratstvo (Brotherhood) political party. A group of the Ministry of Interior officers, mostly inhabitants of Luhansk and Donetsk regions, became the Tornado detachment.

In June 2015, the then-Head of the Luhansk military civil administration Hennadii Moskal turned to the Minister of Interior, General Staff and Secretary of the National Security and Defense Council, asking to disarm Tornado battalion and withdraw it from the territory of Luhansk region, appealing to its uncontrollability.

How the case unfolded

Following Hennadii Moskal’s request, on June 17, 2015 eight Tornado servicemen were detained, including the commander Ruslan Onyshchenko, who was in Dnipropetrovsk.

The Minister of Interior, Arsen Avakov, signed an order on discontinuation of Tornado company the next day, on June 18, 2015.

Tornado troops said their prosecution was caused by the conflict of their battalion commander Onyshchenko with the then-Head of Department of Interior in Luhansk region Anatolii Naumenko, who supposedly covered smuggling in the region. Another reason was military prosecutor Anatolii Matios’ personal distaste of volunteer battalions.

On August 2, 2016, former Tornado troops threw faeces and urine at the attendees in the court room.  At the same time, clashes occurred near the Obolonskyi court building.

According to military prosecutor Ruslan Kravchuk, the accused former Tornado troops are charged with the following:

-sodomy under threat of violence;

-abuse of authority and power by a law enforcement officer accompanied by violence, threat of violence, use of weapons and impact munition;

-misappropriation of vehicle under threat of violence;

-illegal deprivation of freedom and kidnapping;

-home invasion and illegal search committed by an official involving threat of violence;

-extortion committed by an official using his official power and threat of homicide;

-extortion of official documents committed for financial gain which resulted in disorder in agency operation;

-misappropriation of a passport of a citizen of Ukraine.

It has been noted that the case itself consists of 86 volumes.

Trying former volunteers in court turned out to be a difficult task.

Their comrades organized fights near the court premises.

According to law enforcements, the accused try to disrupt each court session.

Why are court sessions closed?

The accused demanded to hold open court sessions. Nevertheless, according to military prosecutor Ruslan Kravchenko, it was impossible, as circumstances of crimes against sexual freedom and sexual integrity are considered during the sessions. In addition, disclosure of circumstances assaulting the victims’ dignity should be prevented.

Second company commander Ruslan Onyschenko was sentenced to 11 years in prison with stripping of the title of militia lieutenant.

Mykola Tsukur was given nine years in prison with stripping of the title of militia lieutenant.

Mykyta Kust was sentenced to nine years in prison with stripping of the title of the junior sergeant.

Borys Holchuk, Maksym Hlebov and Illia Kholod were sentenced to nine years each.

Anatolii Plamadial was sentenced to eight years in prison.

Yurii Shevchenko was sentenced to five years in prison. The court ruled to mitigate his sentence freeing him from punishment and setting three year probation.

All convicts fall under Savchenko’s law (one day in detention facility for two days in prison).

The court ruled to charge all of them UAH 7,750 of court fees.

Both prosecution and defense of former troops of Tornado company convicted by Obolonskyi district court in Kyiv city stated they were going to appeal, as one side believed them to be too lenient and the other too severe.