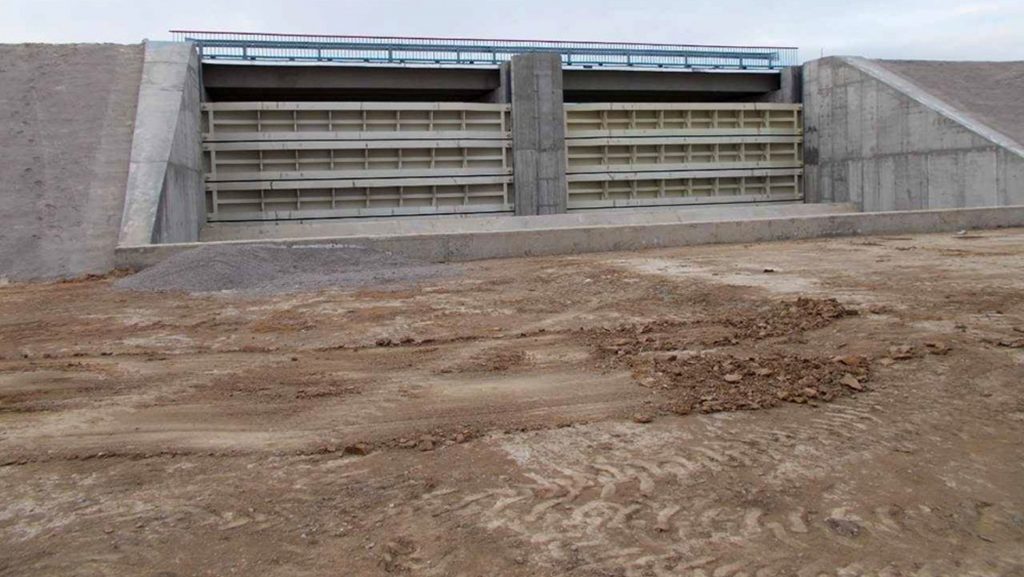 In April 2014 Ukraine blocked the freshwater flow from the Dnipro River to the Russia-annexed peninsula. “Ukrainian” water provided the peninsula with 85% of drinking water. Without a regular supply of fresh water from the Dnipro, the Russia-annexed Crimea faced a shortage of good drinking water. According to experts, Crimean own sources provide only 15% of fresh water. Favorable weather with rainfalls and continuous drilling of new wells have been saving the situation, however, the northern parts of the peninsula have already begun to experience the first signs of water collapse.

UCMC publishes an abridged version of the Hromadske article.

The idea of freshwater flows from the Dnipro to Crimea was first expressed more than 150 years ago, in order to avoid future famine and drought that occurred on the peninsula in dry years. However, the project was implemented only a century later, after Crimea was transferred to the Ukrainian SSR.

In 1957, a large-scale water canal construction began. Six years later, the first part of the facilities was put into service: water flowed to Krasnoperekopsk, then to Dzhankoy, and further, to Kerch. Subsequently, two more branches of the canal were constructed.

Before the annexation, it satisfied 85% of Crimean needs in drinking water, irrigation, and provided technological processes at large chemical plants in Armyansk and Krasnoperekopsk. The canal pumped over a billion cubic meters of water annually.

However, despite the autonomy’s economy heavy dependence on the Dnipro water, Russia seized the peninsula in the spring of 2014. This immediately gave rise to the issue of “water relations” between the Kremlin-controlled peninsula leadership and the State Water Resources Agency of Ukraine.

The canal was usually filled with the Dnipro water in spring, after the winter idle period. However, Crimean officials stated right after the illegal “referendum” that “Kyiv had blocked the canal.” Ukraine denied this accusation, saying that the peninsula got the water, it just flowed to Krasnoperekopsk, but then it had to be pumped a few meters higher by the pumping stations which had been disconnected by Simferopol.

Furthermore, Crimea fell behind in paying for the supplied Dnipro water. That is why a temporary dam was built in Kherson region in 2014. It was planned to install metering devices there – in fact, a huge water meter – in case the parties agree on the price and conditions for supplying fresh water to Crimea. In 2017, the dam became stationary and permanent: it was made from concrete.

Environmentalists and experts in land reclamation immediately warned that Crimea with its current population was doomed to thirst without water from the North Crimean Canal. However, the Kremlin and controlled Crimean officials calmed people down saying that there was water underground.

Hundreds of new wells were drilled in steppe areas of the peninsula in spring and summer of 2014. They even redirected the Biyuk-Karasu River and water from two Crimean reservoirs to provide Feodosia and Sudak with water. All this only temporarily solved the problem. The reservoirs were emptied very quickly. The situation in steppe part on the north of Crimea is even worse. Traditional growing of rice and vegetables has ceased to exist. Farmers switch to grain crops that are less dependent on water.

But the biggest fresh water consumers are two chemical plants – “Crimean Titan” in Armyansk and “Crimean Soda Plant” in Krasnoperekopsk. They had their own reservoirs, which were filled via a channel, while the cities consumed water from wells.

These plants cannot be shut down as they are the only work sources for local residents. So, the  occupation authorities of the peninsula gave them permission to take groundwater for industrial purposes. They drilled more than a dozen wells. Initially water was taken at a depth of 70-75 meters, later at 270 meters, now – at 400 meters. This was reported by Russian Volodymyr Harnachuk, head of public organization “Clean shore of Crimea,” (one of the active participants in annexation of Crimea).

Threat to life and environment

Instead of pumped fresh water they use salt water. Harnachuk began to sound the alarm, saying that the peninsula is on the brink of ecological disaster, and Crimeans will have to be resettled due to the lack of water and its poor quality.

At the end of March 2017, Rospotrebnadzor (actually, a former Sanitary and Epidemiological Service) in Krasnoperekopsk and Pervomaisk districts of temporarily occupied Crimea published this report. The document for the first time officially acknowledged serious problems: chloride content in water exceeded the normal value almost threefold, salinity by almost 2.5 times, and hardness by more than three times. In some areas of Krasnoperekopsk district salinity is exceeded five to six times.

The self-proclaimed government is pumping fresh water, and sea water takes its place in the depths, resulting in changes of chemical composition of water. This water is dangerous not only for drinking but also for irrigation. In this case, water can contain many toxic elements, namely chlorine, sodium, magnesium. If  such water is used for irrigation, soil will become unsuitable for use. This is a reversible process, but the longer it lasts, the longer time is required for recovery.

However, the Kremlin-controlled Crimean authorities increase rather than decrease fresh water pumping. For example, this spring Andriy Kozenko, “deputy” of the State Duma from the peninsula has promised that they will allow Crimean farmers to drill new wells for their needs. But Igor Vail, current head of KrymVodHoz, has made a stand against this.

Rospotrebnadzor, KrymVodHoz and local officials regularly report on quality water in the capital of the Republic or the southern coast of Crimea. But Armyansk and Krasnoperekopsk has been experiencing persistent problems for over a year. There is either no water at all, or dirty water flows from the taps. Dzhankoy residents told the Russian “Novaya Gazeta” that sometimes drinking water has a noticeably salty taste.