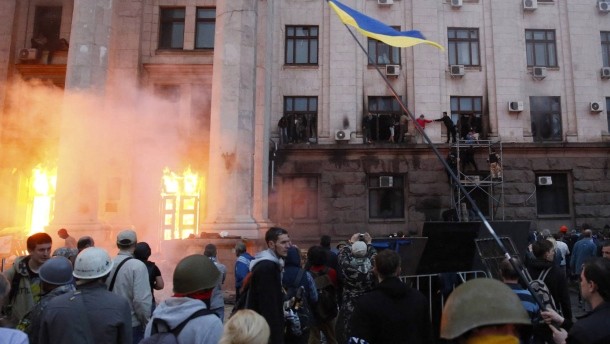 Five months ago, a leading Ukrainian TV channel “UA: First” premiered the film “The Odessa tragedy: bloody trail of ‘Russian spring’”. The film is about a failed attempt to establish the Odesa People’s Republic in the “southern capital of Ukraine” in the spring of 2014, similar to “people’s republics” in Donbas. The result of this plan was to be the separation of the southern and eastern regions of Ukraine from the rest of the country.

But something went wrong … Participants of those events, journalists and public figures, tell why after the special operation failed, civil unrest started on May 2 that led to the death of many people.

Why could bloodshed not be avoided? What was the trigger of the tragedy? What caused the fire in the House of Trade Unions and the death of 48 people? Why did police and fire service not interfere? The film authors answer these questions based on facts given in chronological order. And this is the case when “facts speak for themselves.”

The dramatic events are described by their participants representing both sides of the conflict. The authors avoid political and legal assessments and do not look for perpetrators. They convey to the audience one of the worst tragedies in modern history of Ukraine, without imposing their opinions, without any manipulation or propaganda.

“The Odessa tragedy” is based on the independent investigation carried out by May 2 Group – a public commission, which journalists and independent experts organized in Odesa in the first days after the May events to conduct a journalistic investigation. The film was produced with financial support of the Open Society Foundations and the International Renaissance Foundation.

The film was translated into six European languages: English, Greek, Italian, Spanish, German, and French. A special channel 2nd of May Group Media was created on YouTube to show the film to European audience. The film English can be seen here.

More than 39 thousand viewers watched this film on YouTube. They shared dozens of comments in Russian, Ukrainian and six European languages. Over three months of the Facebook advertising campaign the film webpage received a wide viewership. It amounted to 221 thousand viewers from six European countries.

The analysis of comments on Facebook and YouTube reveals that European audience has little acquaintance with the facts of the Odesa tragedy. When describing the events of May 2, residents of European countries most often use an untrue meta-narrative of the Russian propaganda that “Ukrainian Nazis burned dissenters in the House of Trade Unions”. However, comments of people who sincerely want to understand what happened in Odesa appear in increasing numbers, and they thank the authors of the film for the story told. For example, Lyubov Khalilova, YouTube user, posted: “Thank you for your excellent work! Especially for the Greek translation. It is very important – to convey to the Greeks the truth about the events in Ukraine. Unfortunately, many of them do not know the details, because local channels mete out information, and sometimes provide the false information.”