Bodies of three servicemen killed May 1 at Svitlodarsk area were returned to the government-controlled territory. Militants conducted 45 attacks during the day, 15 of these involved heavy weapons.

Avdiivka area remain the epicenter of combat in Donetsk sector. “The most intense attack at the Avdiivka industrial area took place during the day. The enemy fired over 40 mortar rounds and 15 tank projectiles from the direction of Yasynuvata. On the flanks of Avdiivka – at Shakhta Butovka position and near Kamianka – the enemy used only light weapons,” reported Ukrainian Ministry of Defense of Ukraine spokesman on ATO Colonel Oleksandr Motuzyanyk at a press briefing at Ukraine Crisis Media Center. At Svitlodarsk area militants fired 15 mortar rounds at Luhanske. They were actively attacking Ukrainian positions with APCs and grenade launchers from the evening till the end of the day. Russia-backed militants shelled ATO troops’ positions in Verkhniotoretske with heavy weapons, and used light weapons in Zaitseve and Maiorsk. “Enemy snipers were active near Donetsk airport, in Opytne and Pisky. Moreover, militants’ armored personnel carrier attacked our positions in Pisky for more than 30 minutes,” added the spokesman. Russian proxies conducted a total of 17 ceasefire violations in Donetsk sector, five of them involved heavy weapons. 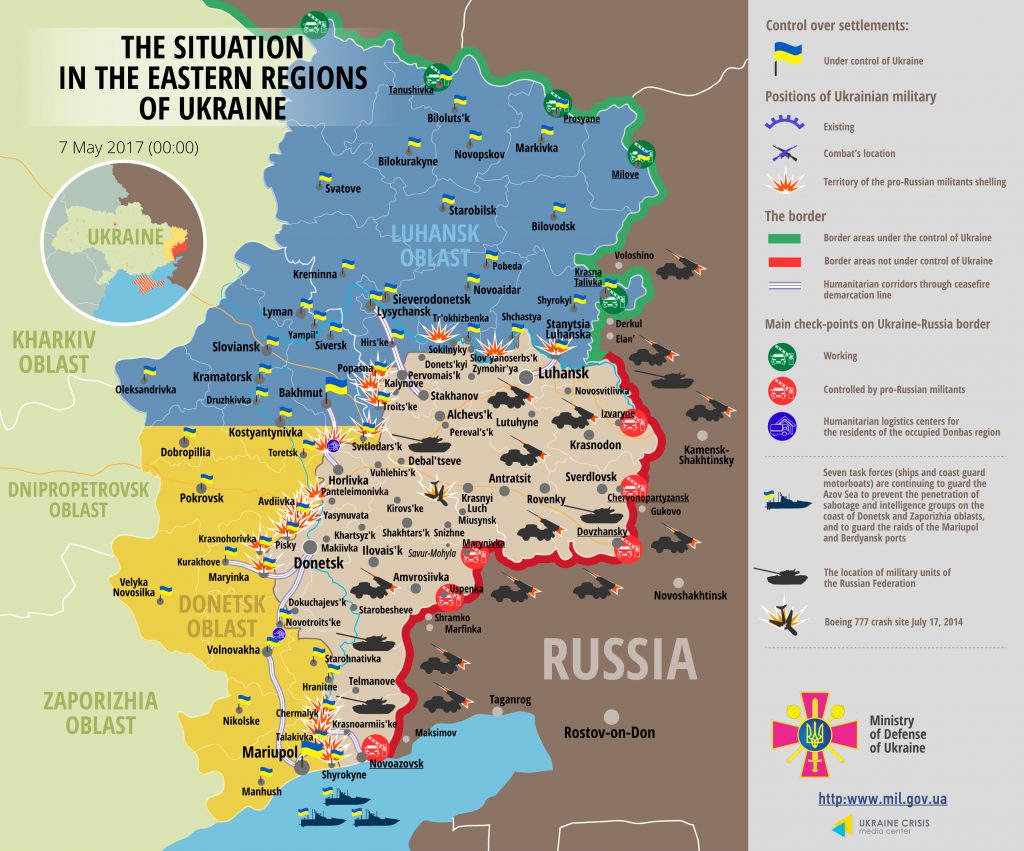 In Mariupol sector, militants violated the ceasefire 17 times as well, using mortars 6 times. They used mortar launchers together with armor and light weapons both in Maryinka and Krasnohorivka. The situation remains unchanged in Pavlopil – Shyrokyne frontline area.  “Enemy is shooting non-stop. Most attacks didn’t last more than 30 minutes and involved only light weapons. Militants’ sporadic attacks took place in Pavlopil, Hnutove and Shyrokyne. Their sniper was active at dawn in Vodiane,” said Col. Motuzyanyk.

In Luhansk sector militants used small arms in Stanytsia Luhanska.  They fired about 30 mortar rounds at Krymske.  In Popasna district hostilities continued from 14:00 to 21:00 with pauses. “The majority of attacks were aimed at our stronghold near Novozvanivka, where militants used mortars together with light weapons. Occupants actively used various grenade launchers in Novooleksandrivka,” said Col. Motuzyanyk. A total of 11 enemy attacks were recorded in Luhansk sector, four of them involved mortars.

Report on the military developments as of May 6 is available here. Interactive data on the shelling: chronology shelling chart and the interactive map.