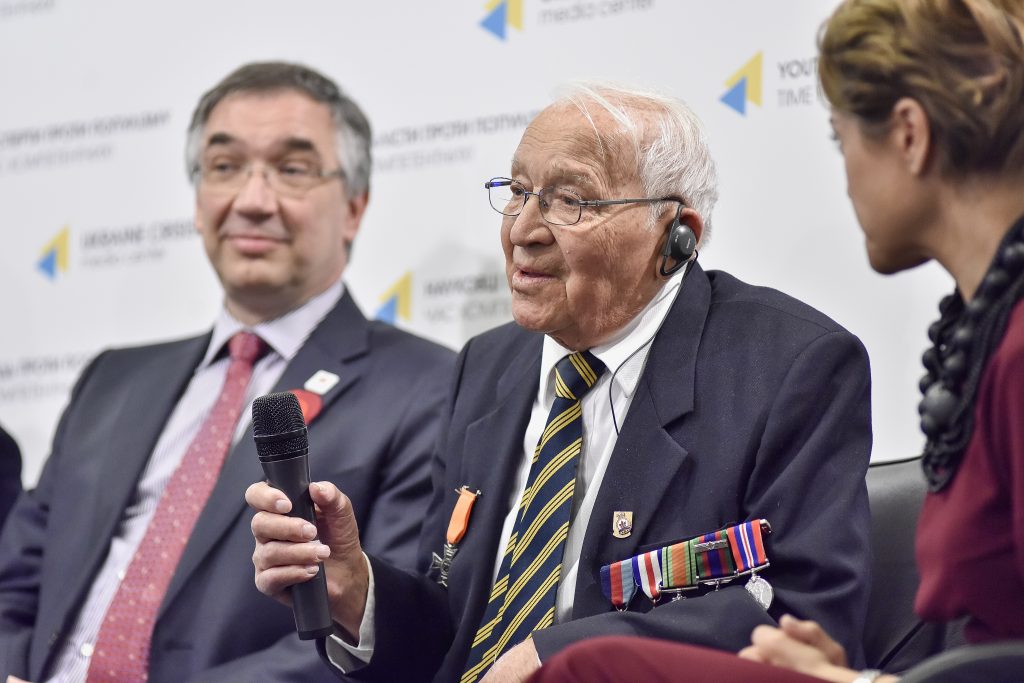 Canada-Netherlands-Ukraine information campaign “Three nations – one freedom” starts this month. Its goal is opening the common chapter of history for representatives of all three countries – participation of Canadians of Ukrainian descent in liberation of the Netherlands from Nazi German troops in summer 1944.

“Hundreds of thousands Canadians participated in the World War II, and tens of thousands among them were of Ukrainian descent. Their part in the history has been fixed, but people here in Ukraine still know very little about it. This is a chance to link the threads of historical experience of these three countries – Canada, the Netherlands, and Ukraine through real life human connections. […] There is still a lot to do for Ukrainian researches, so that these various stories that have much in common could be linked together,” said Roman Vashchuk, Ambassador Extraordinary and Plenipotentiary of Ukraine to Canada at a press briefing at Ukraine Crisis Media Center.

The first campaign materials include a poster made of photos of obelisks on the graves of 117 Canadian Ukrainians who died during liberation of the Netherlands, and a video honoring the fallen heroes and showing this historical link. The video was shot at Netherlands War Cemetery and Memorial, with participation of a living party to those events – Wally Bunka, a 92-year-old WW II veteran from Edmonton, a son of Ukrainian emigrants who moved to Canada in late XIX century. He participated in combat in the ranks of the Royal Winnipeg Rifles, fought in France, Belgium and the Netherlands. He was decorated with Canadian and Netherlands orders and medals.

Gennadiy Kurochka, co-founder and the Board Member at Ukraine Crisis Media Center is the author of the idea. Talking to the Dutch, he noticed that Canadians are honored in the Netherlands for the contribution their country made to liberation of the Netherlands from Nazis. Considering that Ukrainian Diaspora in Canada is one of the largest in the world, he came up with an idea of finding how many Canadian Ukrainians participated in liberation of the Netherlands as a part of Canadian Armed Forces at that time. “In three weeks’ time I started receiving endless lists of Canadian Ukrainians who died for freedom of the Netherlands,” said Andriy Savchuk, representative of Ukrainian Diaspora in Canada. “We found 117 soldiers and three memorial cemeteries of Canadian soldiers. I understood then that we had to do something, for not many people knew about it either in the Netherlands or in Ukraine,” said Kurochka. They managed to find Wally Bunka through the Canadian Institute of Ukrainian Studies. The veteran said he hardly spoke to anyone about the war during all those years. “There were things that happened that should never have happened, but they did, and we have to live with that. It still stays with me, like a carbon copy,” said Wally Bunka.

The video will be spread through social networks and Youtube, and a wide campaign has been planned for the Netherlands. “These will be top TV channels in prime time,” said Kurochka. Publication of the banner and material dedicated to this topic is planned in the Dutch newspaper The Telegraph on the eve of final voting for ratification of the EU Association Agreement. “I believe it’s only through such human stories than we can tell about the idea of freedom which has been uniting us deeply for a long time. Ukrainian soldiers of various citizenships helped to defend this freedom many times as a part of various armies, and they continue doing it now. It’s important that people in Ukraine and other countries should be aware of it. […] We need to make such unique stories popular, for they bring countries together and help them understand we all are much closer that it appears,” said Nataliia Popovych, co-founder and the Board Member at Ukraine Crisis Media Center .