Militants were violating the ceasefire in all sectors. They attacked 34, 14 and six times in Mariupol, Donetsk, and Luhansk sectors correspondingly, using heavy weapons in nine, seven and three incidents respectively.

In Mariupol sector the largest number of ceasefire violations took place in Pavlopil-Shyrokyne frontline. Militants were shooting from small arms during the night and used heavy weapons from 18:00 till late evening. Pro-Russian troops opened fire from 122-mm artillery in Talakivka and Shyrokyne. Hostile sniper groups were active in Novotroitske, Chermalyk and Shyrokyne. “Russian proxies attacked Chermalyk with small arms around 11:30, wounding a civilian. The woman was instantly taken to hospital. Moreover, militants shelled Maryinka and Krasnohorivka with mortars, destroying one building in Maryinka.” informed Ukrainian Ministry of Defense spokesman on ATO Colonel Andriy Lysenko at a press briefing at Ukraine Crisis Media Center. 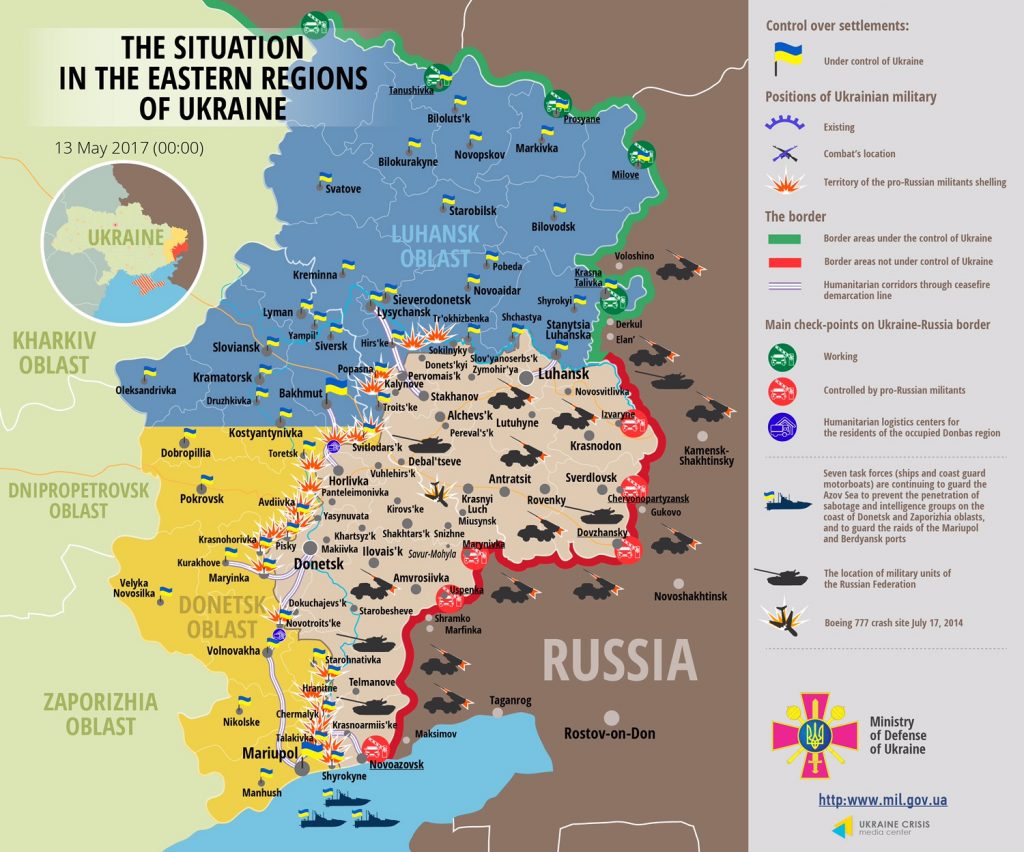 In Donetsk sector the situation was the most restless near Avdiivka. Militants were shooting from mortars four times between 18:00 and midnight. They also conducted two provocations with 120-mm mortars near Novoluhanske and Luhanske. One mortar attack took place near Pisky. In the Horlivka perimeter Russian proxies used only small arms.

In Luhansk sector hostilities took place in Krymske and in Popasna area between 16:00 and 21:00. “Pro-Russian troops opened fire from 122-mm artillery and mortars at Krymske in the afternoon. Another armed provocation happened here in two hours, and this time it involved grenade launchers,” said Col. Lysenko. Two shooting attacks, including one with mortars, were recorded in Novotoshkivske. Militants also used mortars in Novozvanivka.

Report on the military developments as of May 12 is available here. Interactive data on the shelling: chronology shelling chart and the interactive map.