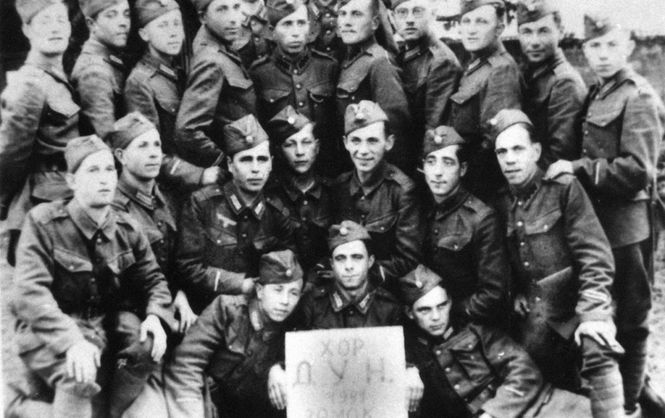 Nachtigall and Roland battalions were not part of the SS structure, their members did not bear SS ranks and were generally accomplishing supporting functions. Galicia division was primarily used as a combat unit. Why are they called death squads then?

During the Second World War the Nazi established Nachtigall (Nightingale) and Roland battalions as well as the Galicia division, the units were composed of Ukrainian nationalists. These units were formed of the Nazi collaborators, were part of the Waffen-SS structure and subordinated to its command, their members had the Waffen-SS ranks. Galicia, Roland and Galicia division were formed to kill civilians in the occupied territories.

The above myth was formed in Soviet times. As the myth goes, all participants of the Ukrainian national resistance movement during World War II were traitors of their motherland and puppets in service with the Nazi eager to implement all the orders of their “masters”. The Nazi entrusted them only the “dirtiest” work – killing unarmed civilians.

Authors of these “sensational” materials often have little understanding of the difference between the military units that were active in the territory of present-day Ukraine during World War II.

Nachtigall and Roland battalions had never been units of the Waffen-SS. Their creation was initiated by OUN (Organization of Ukrainian Nationalists) in cooperation with Wehrmacht officers, in particular with those from the military intelligence organization Abwehr.

However each of the battalion founders was following their own purpose. For OUN the two battalions were to some extent the basis for the future Ukrainian army. In early 1941 the OUN command was aware of the upcoming war between Germany and the USSR. They were hoping that at the outbreak of the war they will organize a revolt to establish an independent Ukrainian state.

To prepare for the revolt and to be able to further hold the territory people with military experience and weapons were needed. However, in the situation OUN found itself after the western Ukraine was annexed by the Soviet Union, its members could have been trained only in the ranks of the German army. Western European states did not treat OUN as an independent actor and did not support it. Meanwhile, negotiations with the main enemy – the USSR – was unacceptable for OUN.

Negotiating with the Abwehr command OUN representatives insisted on the setup of special units in which the organization members were supposed to get trained to later become the basis for forming of the new Ukrainian army.

However the German side had different plans. The Abwehr command saw Nachtigall and Roland as subversive and reconnaissance battalions that were supposed to organize subversive acts against the Soviet military units as well as to safeguard redeployment of the German troops, unarming the remains of the Red Army troops, safeguarding the echelons with captives and ammunition.

Tasks for the battalions introduced by both the Abwehr and OUN differed considerably from the tasks that the Waffen-SS units were supposed to fulfill in the occupied territories.

The soldiers and part of the battalion’s command were Ukrainians. They had military, not SS ranks, while their commanders from the German side were also from the Wehrmacht. Neither Nachtigall nor Roland were subordinated to the SS command.

Despite the hopes of the OUN, participation in combat actions by both battalions was limited. In summer 1941 Roland was redeployed to Moldova and Ukraine’s Odesa region where its warriors were awaiting the order several weeks. It was subsequently redeployed to Austria.

The Nachtigall battalion took part in the seizure of Lviv as part of the German army and moved further to reach Vinnytsia. In August 1941 it was called back from the front, on September 16 both battalions were reorganized.

The history of the Galicia battalion was completely different. It was established two years after the Nachtigall and Roland batallions, in spring 1943, in eastern Galicia that was part of the German General Government back then.

Despite the fact that until April 1945 the division’s official name – the 14th Waffen Grenadier Division of the SS (1st Galician) had the “SS” abbreviation in it, since its early days the division was a merely military unit. That’s why it was not part of the general SS (Allgemeine SS) but instead of the so-called SS troops (Waffen-SS). Such divisions were over forty, half of them were mostly composed of the people residing in the occupied territories and in the states being Germany’s allies (including Croatians, Latvians, Estonians, Hungarians, French etc.). Galicia division was formed to take part in combat actions at the front alongside the Wehrmacht.

Its soldiers and junior officers were Ukrainians – mostly residents of Galicia. Until 1945 the command posts that ranked higher than the battalion commander were mostly covered by Germans, however there were the cases when there were Ukrainians.

Ukrainians enlisted in the division guided by various motives. Part of then took their service with Galicia as a chance to get military experience and weapons to later join UPA that at that time was not able to provide neither training nor arms for such a number of combatants. Others were hoping that the division will serve the basis to form the Ukrainian military units that would fight against the USSR, even on the side of Germans. Ukrainians also enlisted in the division not to be forcibly moved to work to Germany or not to remain in the territory in which the Soviet troops were supposed to come soon. Part of the Galicia division combatants were mobilized forcibly.

[In 1940 OUN split into two parts: OUN(B) headed by Stepan Bandera and OUN(M) headed by Andriy Melnyk. – UCMC] Officially OUN(B) was against the forming of the division and was even spreading the calls to Ukrainians not to enlist in the Galicia division. However a number of organization members actually turned to be part of the division. They wanted to get trained and to receive the weapons as well as to serve as the link between the division’s combatants and UPA to arrange for their transition to the Ukrainian underground when such the occasion arises. Instead OUN(M) on the contrary called on the youth to enlist into the division considering the unit an opportunity for armed fight against the USSR.

Galicia division took part in combat against the advance of the Red Army. In summer 1944 the division was deployed to near Brody, Lviv region, subordinated to the 13th Army Corps as part of the Army Group “Northern Ukraine”. The division was encircled in combat and suffered losses. Out of the 11 thousand fighters only about three thousand got out of the encirclement. About 1,5 thousand of them headed by General Freitag stepped back towards Transcarpathia (Zakarpattia). Rest were either killed or taken captive by the Soviet troops, or joined the UPA. The division’s losses amounted to 70 per cent of its personnel.

Following additional staffing the division was sent to Slovakia where it was fighting against the Slovak partisans. In January 1945 it was redeployed to Yugoslavia to fight against the communist partisans.

There is a myth saying that the Galicia division allegedly suppressed the Warsaw Uprising in August – September 1944, however it does not sit well with the facts.

In April 1945 the division was fighting for some time at the front near the Schloss Gleichenberg castle in Austria. In the end of April, it was excluded from the Waffen-SS troops structure and renamed into the 1st Ukrainian division.

After the German surrender the division’s fighters were interned in the British and American zones of occupation, after 1948 they moved across the world – to the US, Canada, Australia, Argentina and other countries. In 1985 the so-called Deschênes Commission was established to investigate the facts of possible presence of war criminals in Canada including those who came from Ukraine and the Baltic states. The Commission studied archive materials and interrogated witnesses in Canada and Western Europe to later produce a report. According to the report neither of the emigrants – former participants of the Galicia division, was guilty in having committed war crimes during the Second World War.