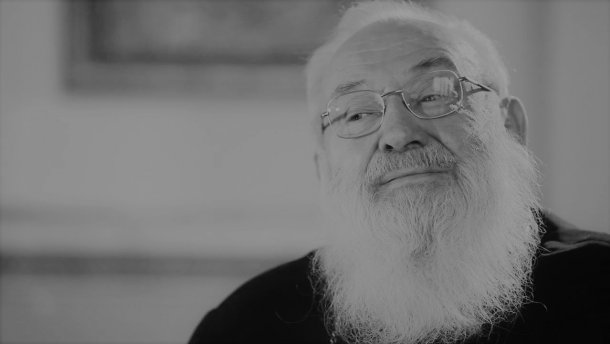 Just as blind philosopher, Homer became the father of the European civilization, as his Illiad has inspired political leaders and generals for centuries after him, just as Shevchenko, whose poetry and legacy turned Ukrainian people into a modern age nation was called Kobzar – blind musician who from door to door shared wisdom, inspired people and appealed to the best in their souls – likewise Blazhennishyi Liubomyr when he lost his sight, became even more influential in the Ukrainian society. His presence will influence our progress into the future. His rich baritone voice was able to touch the lowest, most powerful registers of our souls, of Ukrainians who were never able to see him – from Donetsk, Luhansk or Simferopol, but for whom also he was a true moral authority. His legacy cannot be overestimated.

His Excellency Borys Gudziak, Eparch of the Paris Eparchy of St. Volodymyr the Great for Ukrainians of the Byzantine Rite in France, Switzerland, and the Benelux countries, President of Ukrainian Catholic University, remembers His Beatitude Lubomyr.

His Beatitude Lubomyr Husar was born on February 26, 1933, in Lviv. There he finished primary school and the first year of secondary school.

In 1944, the family was forced to leave Ukraine. At the beginning they went to Austria. His Beatitude continued his studies at the Ukrainian secondary school in Salzburg.

In 1949, Husar family moved to the USA. His Beatitude Lubomyr finished secondary education at the minor seminary in Stamford, Connecticut. Then he studied philosophy at Saint Basil’s College, where in 1954 he received a bachelor’s degree.

He finished theological studies at the Catholic University of America in Washington, D.C. In 1958, as a student of Saint Josaphat’s Major Seminary he received a licentiate in theology. On March 30 of the same year Bishop Ambrose Senyshyn ordained Lubomyr Husar a priest to serve in the Eparchy of Stamford.

From 1965, he was pastor of Holy Trinity Parish in Kerhonkson.

In 1969, he moved to Rome to continue theological studies, which he completed with a doctorate in theology in 1972.

In 1972, His Beatitude Lubomyr entered the Monastery of Saint Theodore (monks of the Studite Order) in Grottaferrata, Italy.

From 1973 to 1984 His Beatitude taught at the Pontifical Urbaniana University in Rome.

On April 2, 1977, in the monastery of the Studite Order in Castel Gandolfo near Rome he was ordained a bishop by Patriarch Josyf Slipyj.

In 1978, Patriarch Josyf appointed Bishop Husar as archimandrite of the Monastery of Saint Theodore and responsible for the monasteries of the Studite Order outside Ukraine.

From 1984 to 1991 he was protosynkellos (chancellor) in Rome of the Lviv Archeparchy. In 1993 together with whole community from Grottaferrata he returned to his native land.  In 1993-94 he served as a chaplain at Holy Spirit Seminary in Lviv. In November 1996, His Beatitude Lubomyr was appointed auxiliary bishop to the Head of the Ukrainian Greek-Catholic Church.

On January 26, 2001, at an extraordinary Synod of Bishops he was elected Major Archbishop of the UGCC.

On February 21, 2001, he was appointed by Pope John-Paul II a cardinal of the Catholic Church.

Under the headship of His Beatitude Lubomyr in the Ukrainian Greek Catholic Church, an event of the historic importance took place, the seat of the Head of UGCC was transferred from Lviv to Kyiv on 21 August, 2005. His Beatitude Lubomyr made much effort toward it as well as toward development of the centralized administrative apparat, the Patriarchal

Curia of UGCC, which has become the center of coordination of Church life.

On 22-23 January, 2011, the Ukrainian Greek Catholic Church celebrated the 10th anniversary of the patriarchal service of the Supreme Archbishop of Kyiv and Halych, His Beatitude Lubomyr.

The main celebratory events were the Christmas Prosphorae of the head of UGCC on 22 January at the International Exhibition Center in Kyiv and the Hierarchical Liturgy.

Under Patriarch Lubomyr (Husar), the following key Theological documents were issued in UGCC: “Ecumenical Concept of UGCC” and “One People of God in the Kyiv Hill Country.” They deal with the principles of cooperation of UGCC with the other parts of the Kyivan Church, which once was one, stress that UGCC has always showed by its activity an aspiration for closer and deeper cooperation with the traditional Ukrainian Churches.

Many religious studies experts and public figures highly appreciate the moral authority of Patriarch Lubomyr (Husar) and his correct understanding of the place of the Church in the state and its role, which allowed him as the head of UGCC to prevent involvement of the Church in the political relations and strengthen its moral authority in the Ukrainian society for 10 years.

On February 10, 2011, the Vatican announced that Pope Benedict XVI, according to the prescriptions of canon 126 § 2 of the Code of Canons of the Eastern Churches, accepted the resignation of the head of the Ukrainian Greek Catholic Church Major Archbishop of Kyiv-Halych His Beatitude Patriarch Lubomyr Husar.

After resignation in February 2011 and election of new head patriarch Sviatoslav Shevchuk he remained active as civic leader, moral authority and powerful columnist. He was one of most influential voices during the Revolution of dignity and never afraid to speak to millions gathered.

Given these prevailing opinions and doubts, Josyf Slipyj feared that the hierarchy in Ukraine might die out and not be replaced by the Holy See, which was evidently avoiding confrontation with the Kremlin. In 1977, to ensure hierarchical continuity he decided to consecrate three bishops for Ukraine secretly, as was done in the Soviet Union in the catacomb Church. These bishops were to serve as a reserve hierarchy and their role was meant for future circumstances, which could not be fully foreseen. The consecration occurred in the Studite monastery of Castelgandolfo. One of those secret bishops was Archimandrite Lubomyr. The consecration occurred suburb without the knowledge and blessing of Rome. From a strictly canonical point of view, one that does not always foresee the vexing complexities of real life, it was a valid but illicit ordination. Providence and history will yet judge the bold decision. Patriarch Joseph believed that he was insuring the future of the hierarchy of his martyr Church. It was with great humility and discretion that the three secret bishops received their consecration and subsequently lived their hidden episcopal life. Bishop Lubomyr remained a clandestine bishop for nineteen years, first in Rome and after 1993 in Ukraine. His colleagues of the faculty of the Pontificia Università Urbaniana, where he was a professor of ecclesiology, did not know that he was a bishop. Most people in the Church did not know that he was a bishop. We seminarians living and studying under the care of Patriarch Josyf initially also did not know.

Bishop Lubomyr maintained his clandestine episcopal status with great grace and exemplary humility continuing to live and work as a monk, archimandrite, teacher, and spiritual director. When Patriarch Josyf died in 1984, he was succeeded by Myroslav Ivan Lubachivsky, who in exile continued to lead the UGCC. Lubomyr Husar served as Lubachivsky’s advisor and from 1985 to 1991 as his protosyncellus (vicar general). In 1986 Myroslav Ivan became cardinal and in 1991, on the eve of Palm Sunday, returned to his See of Lviv where ebullient crowds of hundreds of thousands greeted the homecoming of their exiled patriarch.

With the onset of Perestroika, the legalization of the Greek Catholic Church (1989), the fall of the Soviet Union, and the independence of Ukraine (1991), Lubomyr Husar came to visit the homeland that he was forced to leave almost half a century before and ultimately, in 1993, moved his monastery to Ukraine. Near Lviv, he continued to foster monastic life, offer spiritual direction for seminarians, students, and intellectuals until the spring of 1996 when he was recognized bishop and appointed exarch in Kyiv. It is a poorly kept secret that John Pau l II—who developed a profound understanding of the vicissitudes of the UGCC, a sympathy for the vision of Patriarch Josyf, and an authentic respect for the humble “catacomb” monk-bishop Lubomyr—personally supervised the delicate process of the recognition of his episcopacy.

In the last years of the life of Patriarch Myroslav Ivan Lubachivsky, Bishop Lubomyr fulfilled the functions of the head of the Church. Already then and subsequently since January 2001, when he was elected to replace his deceased predecessor, the voice of Bishop and later Patriarch Lubomyr in Ukrainian society has been a unique one. He has spoken out and written pastoral letters, direct in style and sophisticated in content, on a wide range of social, economic, and political issues. His demanded to the government to pay back-wages, summons to politicians to stop election fraud, exhortations to citizens to defend their dignity and voter rights, and invitations to church leaders of different confessions to search for common ground have greatly contributed to the ethical and religious discourse in times of crisis, civil unrest, and social conflict.