Active hostilities north of Bakhmut road resumed in Luhansk sector yesterday. The escalation started after 15:00, when militants opened mortar fire at Ukrainian troops’ positions south of Krymske. Russian proxies increased the attack intensity towards the evening and started using barrel artillery. “In total, they fired over 150 mortar shells and projectiles at our positions in this area (Krymske-Novotoshkivske frontline). For instance the most intense attack in the entire Luhansk sector took place in Krymske between 23:00 and 23:30. It continued 25 minutes, and militants fired two shells or 122-mm projectiles every minute,” informed Ukrainian Ministry of Defense spokesman on ATO Colonel Oleksandr Motuzyanyk at a press briefing at Ukraine Crisis Media Center. According to the available information, militants are planning to continue active hostilities in this area and are moving enforcement to the frontline, namely armor and tanks. “Ukrainian side reserves a right to respond with any adequate action in case the personnel’s lives are threatened or the enemy attempts a offense at our positions,” said the spokesman.

In addition to Bakhmut road, militants were violating the ceasefire in Popasna district after 20:00. Russian proxies committed four armed provocations in Stanytsia Luhanska district which did not involve heavy armor. In total, 23 hostile attacks took place in Luhansk sector, and heavy weapons were used in 14 incidents.

In Mariupol sector militants conducted 29 attacks, using heavy weapons 11 times. 80 % of all attacks occurred in Pavlopil-Shyrokyne area. The evening attack in Pavlopil was the most intense, it involved mortars, armor and light weapons. In Krasnohorivka militants conducted three mortar and artillery attacks, firing over 30 projectiles. Some of them hit residential quarters. Moreover, militants used mortars in Maryinka and Slavne. In Chermalyk militants were shooting from Grad-P system. Ukrainian troops actively respond with fire.

In Donetsk sector militants violated the ceasefire 21 times, using heavy weapons nine times. “Shakhta Butovka position was the main flashpoint. Militants were shelling it from mortars during six hours, launching over 100 shells. Moreover, the enemy used mortars near other positions of Armed Forces at Svitlodarsk area, near Horlivka, in Avdiivka and at the junction of Donetsk and Mariupol sectors. All of them, except one, were brief (not more than 10 shells) and were usually accompanied by light weapons fire,” elaborated Col. Motuzyanyk. The situation was the calmest in the vicinity of Donetsk airport.

Four Ukrainian troops were killed in action yesterday, three of them in the evening shelling in Pavlopil. Seven troops sustained wounds. “It was in January 2017, during severe fighting for Avdiivka, that three or more Ukrainian servicemen died at fighting positions near one inhabited locality,” reminded Col. Motuzyanyk.

Avdiivka is still cut off the gas supply as a result of intense attacks. There are serious difficulties with water supply in some frontline areas in Donetsk region caused by damage to the South Donbas water pipeline. “It requires serious lengthy repair which is possible only on condition of stable ceasefire, in line with Art.1 of the Minsk Agreements,” said the spokesman. 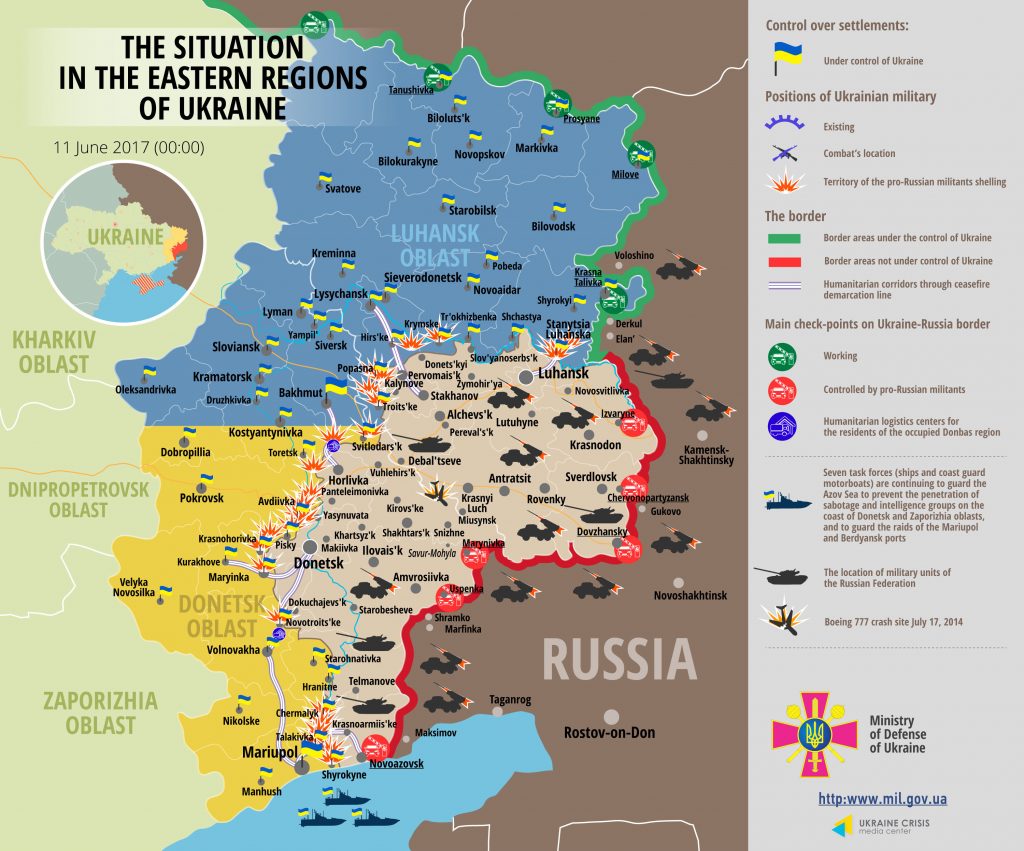 Report on the military developments as of June 10 is available here. Interactive data on the shelling: chronology shelling chart and the interactive map.