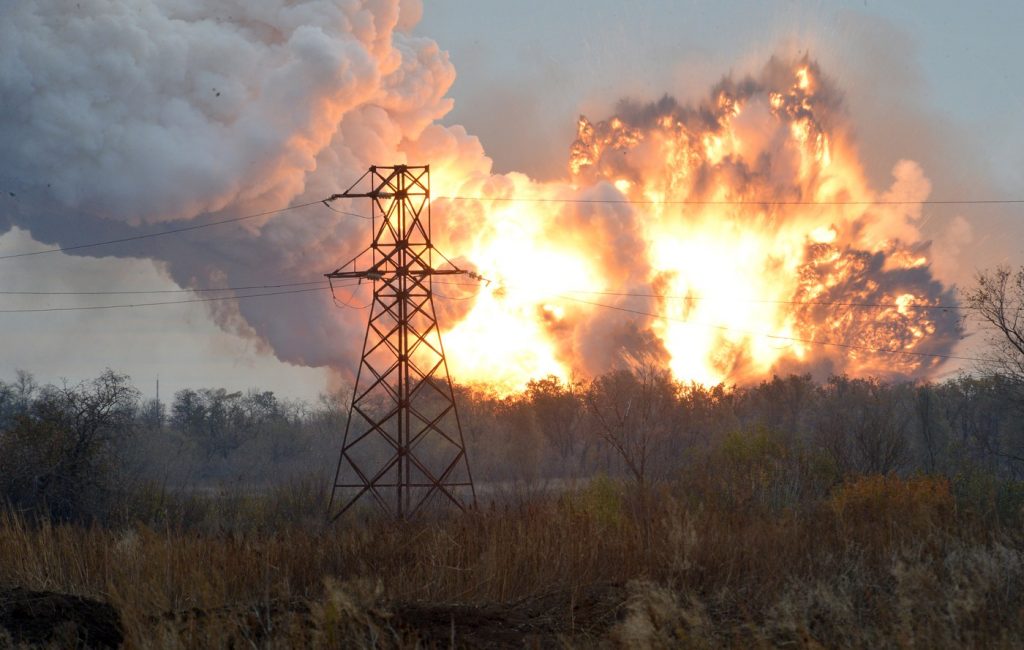 Donetsk region takes one of the leading places in Europe and the first place in Ukraine for the level of environmental degradation. The situation in the region has deteriorated since the beginning of the military conflict in Donbas. The consequences of the hostilities can provoke a real ecological catastrophe affecting the entire territory of Donbas, and not only Donbas, claimed Dmitriy Averin, ecologist, Zoi Environment Network expert, in an interview to “Ostrov”. UCMC publishes an abridged version of the interview.

– Does the war in Donbas influence the region’s ecology?

Donbas is the most technogenically loaded region of Ukraine and Europe. According to 2013 data, the amount of air emissions in the region was 44% of the total emissions in Ukraine.

Military operations in the east affect virtually all the components of the environment. The natural environment is polluted as a result of both direct impact from combat operations and indirect effects, for example, during outages at large industrial enterprises, disruptions in the work of critical infrastructure facilities.

– What dangerous industries are currently concentrated in Donbas?

There are several large metallurgical enterprises in Donbas, which, one way or another, were damaged as a result of the conflict. These are Makiivka, Donetsk and Yenakiievo iron and steel plants, Alchevsk metallurgical plant, Avdiivka coke plant, Luhansk, Sloviansk, Vuhlehirsk and Mironivska thermal power plants. There were interruptions in the work of Starobeshivska, Kurakhivska and Zuyivska TPP. Enterprises of the chemical industry – Lysychansk oil refinery, Donetsk state chemical plant, the Severodonetsk Azot and the Horlivka Stirol – also suffered damage. Coal mining enterprises, which are the most vulnerable during the fighting, are also very ecologically dangerous, since they need uninterrupted power supply.

– What are the dangers of damage to such large enterprises?

– An emergency disruption in the work of large enterprises, in my opinion, can have the most dangerous and unpredictable impact. The destruction of production infrastructure and emergency shutdowns of enterprises may result in higher risks of such impacts. Emergency emissions lead to polluting the air, surface and ground waters, and soils.

For example, in 2015, firing at the Avdiivka coke plant resulted in a fire and a coke oven gas leak, volley emission of coke oven gas with a high content of benzene, hydrogen sulphide, and ammonia. Many people are aware of the situation with the Dzerzhinsky phenol plant, which is practically on the contact line. If a dam is destroyed, liquid chemical waste can get into the Siversky Donets river and further downstream – to the Sea of ​​Azov.

One of the main environmental problems of Donbas is coal mines flooding due to the lack of water drainage, especially in the Horlivka area. This leads to changes in groundwater dynamics and entails a number of negative environmental consequences. Waterlogging and salinization of soils are not improbable, since mine waters in Donbas are highly mineralized. Salinization of soils leads to their phasing-out, higher mineralization and radioactivity of groundwater and surface waters, and so on.

– Why are the Donbas mines flooded?

– Operational disturbances, emergency power outages, destruction of buildings, structures or pumping equipment during the shelling lead to suspended pumping of mine waters. Today, water drainage does not work practically in the whole territory from Horlivka to Zolote.

– How soon will the local population of Donbas feel negative environmental consequences?

– Water level of the rivers in Donetsk region has increased, which is indicative of the increased groundwater level. This water enters surface water sources unpurified. Therefore, the salt concentration changes, which in its turn affects the quality of drinking water and the chemical composition of water in the rivers of the region.

Besides, when the groundwater level rises, the territories are flooded, and methane is displaced to the surface. Methane is a flammable gas that can accumulate in basements and entrances of houses, causing dangerous situations.

I think that part of the Donbas territories may become uninhabitable within 5-10 years due to the impossibility of its economic exploitation. First of all, it will affect the territories near the contact line.

–  The OSCE focuses on the Donetsk filtering station, the destruction of which may result in an ecological catastrophe. What dangers are posed by this facility?

–  Water at all filtering stations is purified with the help of chlorine – an active substance, which is very dangerous both for the population and for the environment. Therefore, damage to the station may result in releasing chlorine and polluting the territory for a distance of several kilometers from the emission epicenter.

–  Is there a danger of increased radiation in the uncontrolled territory of Donbas?

–  There are several objects in Donetsk region, the destruction of which may result in radiation contamination of large areas. Firstly, it is the Yunkom mine in Bunhe (formerly Yunokommunarivsk), where in the late 1970s, an underground nuclear explosion was conducted as part of an experiment to reduce tension in the rocks. Since the mine is flooded, radiation contamination of mine waters can occur, which in the future will also affect surface water. Secondly, there is a radioactive waste storage facility of the USSR Ministry of Defense in the territory of the Donetsk state chemical plant, the state of which was already poor in the 2000s. The situation with the seal of the storage facility is unknown now, especially given the fact that several powerful explosions occurred in the plant territory in 2014-2015.

–  What measures are taken by the Ukrainian side to prevent an ecological catastrophe?

–  The Ministry for Temporary Occupied Territories, the Ministry of Ecology of Ukraine, and various international organizations are actively working on this issue.

For example, at the request of the Ministry of Ecology, the Coordinator of OSCE projects in Ukraine is currently working on a project to investigate the damage caused to the environment by the armed conflict in eastern Ukraine. Besides, the Ukrainian side deals with restoring electricity and water supply, strengthening dams and so on. However, such work depends not only on the Ukrainian side, because repairs require the ceasefire that must be also agreed with the SCCC with the Russian side.

In the future, we together with international organizations and partners should find the ways to coordinate our efforts in organizing the work to preserve Donbas.