The situation in the ATO zone in the East of Ukraine remained tense yesterday. Most intense hostilities took place in Mariupol sector, informed Ukrainian Ministry of Defense spokesman on ATO related issues Colonel Oleksandr Motuzyanyk at a press briefing at Ukraine Crisis Media Center. “The number of projectiles fired at Ukrainian positions exceeded one hundred. The enemy opened fire from tanks at 06:00 and fired 10 projectiles at Ukrainian Armed Forces’ positions near Krasnohorivka. Militants were conducting intense mortar attack at Vodiane from 08:00 to 09:30. They fired over 60 mortar shells at Ukrainian positions. After 18:00 Russian proxies opened mortar fire at the town once more,” elaborated the spokesman. A brief artillery attack happened in Shyrokyne in the evening, and mortars were used in Hnutove. Russian proxies used grenade launchers in Lebedynske late at night. In total, eight hostile attacks occurred in Mariupol sector, and five of them involved use of heavy weaponry.

In Luhansk sector militants conducted four attacks. They shelled Krymske from 152-mm artillery at night, and were shooting from mortars after 18:00. Two ceasefire violations happened in Stanytsia Luhanska and Shchastia where Russia-backed troops used small weapons and grenade launchers.

In Donetsk sector militants violated the ceasefire 13 times, using mortars three times. An attack at Luhanske involving grenade launchers, APC weapons and mortars occurred between midnight and 02:00. Ukrainian troops had to respond with fire. After 04:00 militants were shelling Shakhta Butovka position with light weapons for one hour. Following this, the ceasefire held in Donetsk sector during the day. Militants conducted a brief mortar attack at Avdiivka and Pisky around 20:00. Light weaponry was used too.

Two Ukrainian servicemen were killed in action yesterday as a result of tripping on a mine near Pisky, and three more were wounded. 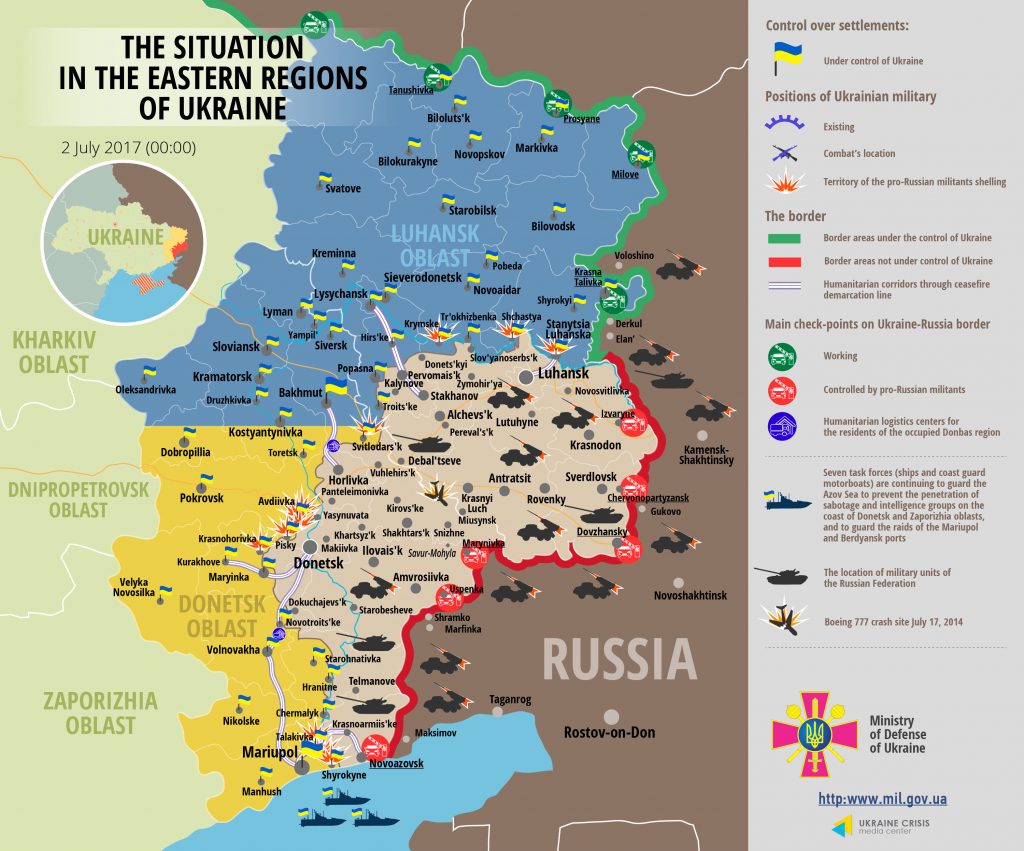 Report on the military developments as of July 1 is available here. Interactive data on the shelling: chronology shelling chart and the interactive map.