The largest number of attacks in the ATO zone occurred in Luhansk sector. Militants violated the ceasefire 16 times, in all sectors from Stanytsia Luhanska to Popasna. They used mortars in Troitske, Krymske and Staryi Aidar. The situation was the most difficult in the vicinity of Bakhmut road where militants fired three mortar rounds at night and opened disturbing fire in the evening. Militants’ subversive reconnaissance team set off towards Ukrainian positions in Novotoshkivske under protection of sniper fire. “Having notices the enemy’s progress, Ukrainian troops opened fire for effect. They defeated the hostile attack in several hours. Unfortunately, one Ukrainian soldier was killed during the hostile attack,” informed Ukrainian Ministry of Defense spokesman on ATO related issues Colonel Andriy Lysenko at a press briefing at Ukraine Crisis Media Center.

In Donetsk sector militants conducted six attacks in the vicinity of Svitlodarsk and Avdiivka. “The enemy opened fire in Svitlodarsk only once, conducting a half-hour shelling, which involved light weapons and armor. The situation was somewhat difficult near Avdiivka: five attacks occurred in Kamianka-Avdiivka-Shakhta Butovka frontline. All of them involved light weapons and lasted 30-60 minutes. Our troops responded with fire,” elaborated Col. Lysenko.

Militants violated the ceasefire 13 times in Mariupol sector. They opened mortar fire at Ukrainian positions in Krasnohorivka, firing 20 rounds in one hour, and started shooting again from mortars and tank in the evening, at sunset. Maryinka was attacked at nightfall. Residential quarters of the town came under militants’ grenade fire. There were no civilian casualties. The ceasefire held near Dokuchaevsk yesterday.

Militants used mortars and light weapons in Pavlopil, Hnutove, Vodiane and Shyrokne. “The longest – over 2.5 hours – and most intense attack in this frontline area took place in Shyrokyne after 20:00. Russian proxies fired over 15 mortar rounds at our strongholds, and opened fire from large caliber machine guns and anti-aircraft mounts,” said the spokesman.

One Ukrainian serviceman was killed in action yesterday and three soldiers were wounded. “As previously reported, our soldier was killed while repelling hostile attack at the Bakhmut road,” said Col. Lysenko. 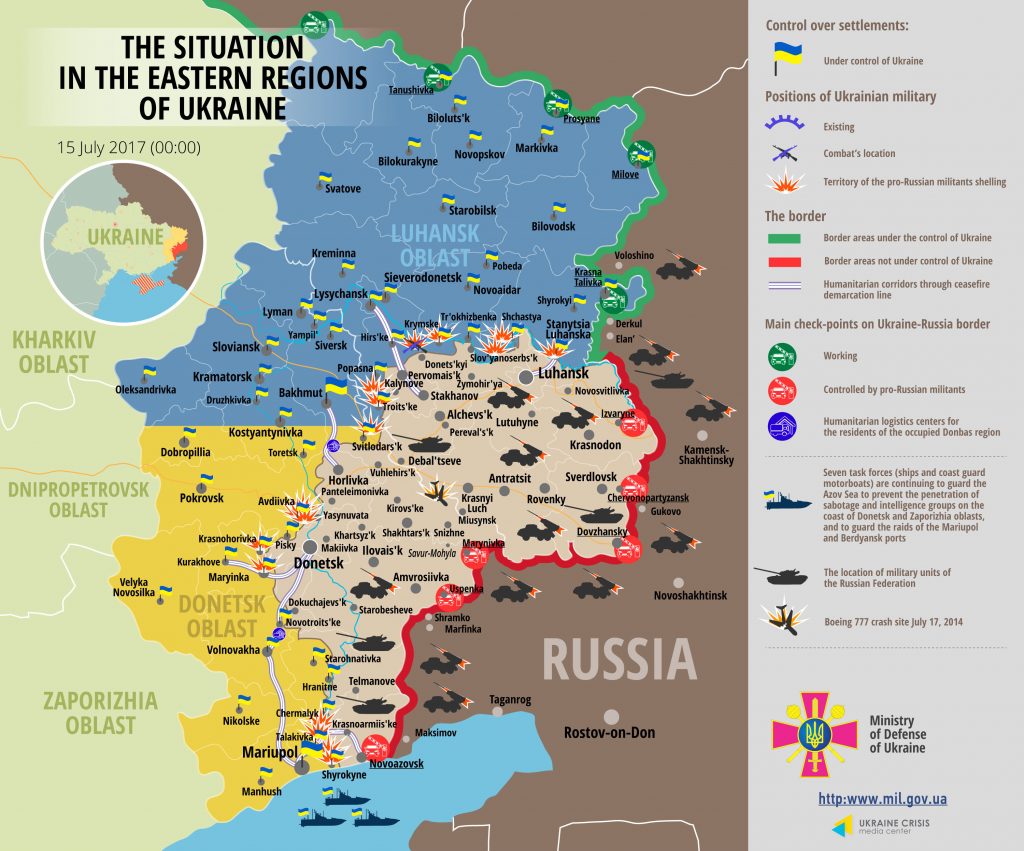 Report on the military developments as of July 14 is available here. Interactive data on the shelling: chronology shelling chart and the interactive map.