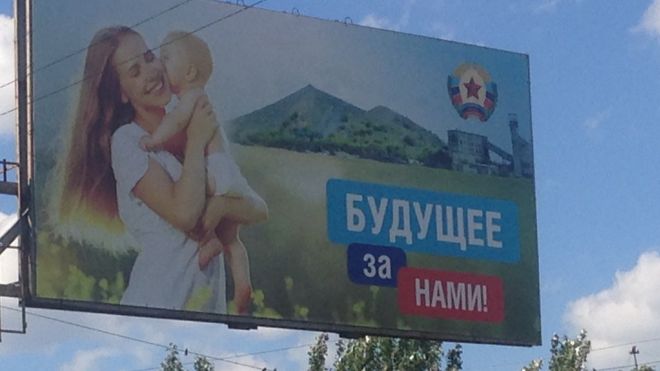 The most difficult aspect of living in the “LPR” is the legal environment, because bread is being sold now the way it was in the summer of 2014, medicines can be purchased at local pharmacies or ordered via smuggling. However, you lack the feeling that your rights are protected.

In the autumn of 2014, my business friends who returned to Luhansk from vacation began to look for their minibus. At a paid parking lot, they found a written notification from one of the “commanders” with a date and an illegible signature that their vehicle had been withdrawn for the needs of the army.

Ownership with no rights?

They couldn’t hold it against the parking lot watchman – what could he possibly do against people with weapons? They did not have any claims to him; they felt annoyed only because of themselves and their short-sightedness.

Long searches around “military” facilities, forging a relationship with some “Lyoshas” and “Lyeshyis” produced a result – they were given a written answer: in August 2014, their minibus was hit by a shell, the vehicle was damaged beyond repairability and was left on the battlefield. No proofs or evidence. You may go, look and see it yourself.

Three years later, we can say that at least some “laws” started to work in these territories. First, since April 2017, it is no longer necessary to leave the boundaries of the “republic” to sell or purchase a property. Previously, buyers and sellers had to travel to the nearest Ukrainian city for a notarized transaction confirmation.

This, of course, simplifies the whole process, but there are too many risks as well. The biggest problem is that Ukraine does not recognize these agreements, so they can be canceled after the return of the Ukrainian rule.

Sale and purchase of housing in mortgages

Will banks forgive the new apartment owners their debts and interest, or will they easily write off a small fortune from former owners?

It all depends on the buyer’s confidence and the seller’s credibility. Although, both are sure that Ukraine will not come back, so no one will have to pay anything.

The most common answer to calls from banks: “Yes, I’m in Luhansk! Come and take away everything I owe you!”

But people understand that housing has fallen in price. If you sell an apartment, you will not buy an equivalent housing for the money you have received. It is expensive to pay for utilities in empty apartments, but to sell an apartment for almost nothing is, at least, unwise.

The price of real estate has actually fallen more than three times if compared with the pre-war time. This is the reason for the nervous breakdown for many who bought an apartment on the eve of the war and still pays debts.

In April 2017, the “republic” established its own register, which allows people to enter an inheritance. The crowds rushed to the Technical Inventory Bureaus to find out that all documents issued before the summer of 2014 are invalid. It is required to submit the new technical passport, new property evaluation and receipts for payment in local banks.

As to movable property, the situation is different now. “Regulations” on personal vehicles are expected to be adopted in September. But now people can sell and buy cars on the basis of a general power of attorney issued by local notaries.

The maximum duration of a “power of attorney” is three years. It costs 2,000 rubles (909 UAH). Such “powers of attorney” are valid only in these territories. It may happen that the vehicle owner will report a car theft in the territory of Ukraine. It all depends on the seller’s word despite the fact that the car may be used as collateral for the loan at a Ukrainian bank. There must be the documents certifying that the loan has been repaid.

At the local car dealership, I was told: “Our name is a guarantee that everything is legally ok with the car.” Although this dealership has existed less than a year, they promise us guarantees. However, the dealerships really check in Ukrainian driver and vehicle licensing divisions whether cars are not mortgaged or sought for. They say they have already burned their fingers on such sales. But the same dealerships can also help you get a power of attorney in Ukraine for $100.

Besides, there are only criminal courts here. It is impossible to divorce, establish legal paternity or sue the neighbors for compensation for the flood in the apartment.

The most demanded “legal” private services in this territory include adding new photos in passports, extending bank cards, and passing identification in Ukrainian banks.