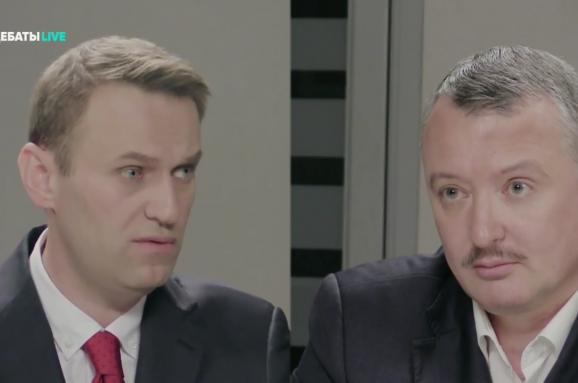 Russian opposition leader Alexei Navalny held a debate with Igor Girkin (Strelkov), former leader of the so-called “DNR” militiamen, where they raised questions about Russian aggression in Ukraine, in particular, the war in Donbas and annexation of Crimea. Russian citizen Girkin, who claimed that he was a Colonel of the FSB, headed the Russian sabotage group, which carried out an armed seizure of the city of Sloviansk, Donetsk region in April 2014. In addition, during his “leadership” there was an incident when militants downed the Malaysian MH17 Boeing with a rocket launcher “Buk”, taken from Russia. In early March 2014, Girkin arrived in Crimea and coordinated the seizure of Ukrainian military bases, local government authorities and autonomy management by Russian servicemen.

Based on this context, Hromadske prepared a selection of the most important quotes spoken at the debate, which are related to Crimea and Donbas – the occupied and annexed territories of Ukraine, as well as Russia’s involvement in this.

► Navalny’s question about the seizure of Slovyansk: “Did you not receive money for your operation from the oligarchs?”

I took the weapons in Crimea, besides, it was not big money. And, as an officer, I cannot and will not answer the rest of the questions, because if I do, it will deprive me of the officer’s honor. There are people who continue fighting (in Donbas – ed.), and they depend on me.

►Girkin on the Boeing MH17 downed in Donbas

We did not have the means to shot down a Boeing. I had five “Igla” surface-to-area missiles and one “Strila-10”, which was in Zugres at the time of Boeing’s fall. I cannot say anything more. I do not follow, do not care about and do not take part in the investigation. I can swear on the Bible that I did not write that message about the downed Boeing.

► Navalny on the war in Donbas and Russia’s involvement

The war you started is an expensive thing that destroys Russia’s economy. No, Russia cannot wage a war. Events in Donbas are horrible events – 10,000 people have been killed. There is Minsk-II, you may not agree with them. But the leaders of these “republics” (self-proclaimed “LPR” and “DPR” – ed.) and the Kremlin, Europe, USA, Ukraine are part of these processes. But Russia has no money for this war. You said, “We will still fight”. No, we will not. We do not want to fight. I would like to stop it all.

►Girkin on the invasion of Donbas and Crimea.

I could have come anywhere: to Odesa or Melitopol. But I came to Donbas to give the Russians the right to self-determination rather than to unleash a war. I was not afraid to be killed. I would not have gone to Crimea and Donbas if I had been afraid. There were many situations when I might have been killed. And then such conditions were set forth that I could not stay there. However, I cannot say what conditions. It is a secret.

► Navvalny’s question: “Has the war in Ukraine improved anybody’s life?”

►Girkin on the end of the war in Donbas.

There will be no reconciliation with Ukraine for as long as there is the acting government in Kyiv. The war is inevitable.

► Girkin on the leaders of the self-proclaimed “LPR” and “DPR”.

Putin betrayed the whole “Novorossiya”, although he could free it. He betrayed entire Ukraine. Putin turns it into the second Poland. For me, both Plotnitsky (“LPR” leader – ed.) and Zakharchenko (“DPR” leader – ed.) are traitors. I came as a volunteer and appointed myself a commander. I was not a citizen of Donbas. When they became the heads of “republics”, they signed the Minsk agreements and thus betrayed entire Donbas.

► Girkin on his return to Donbas.

I received nothing for my escape from Donbas or for my service. I am living even worse now. Before the events in Donbas and Crimea, my income was high. Now I am a hired worker. I live on a salary and a pension. I do not have anything else.