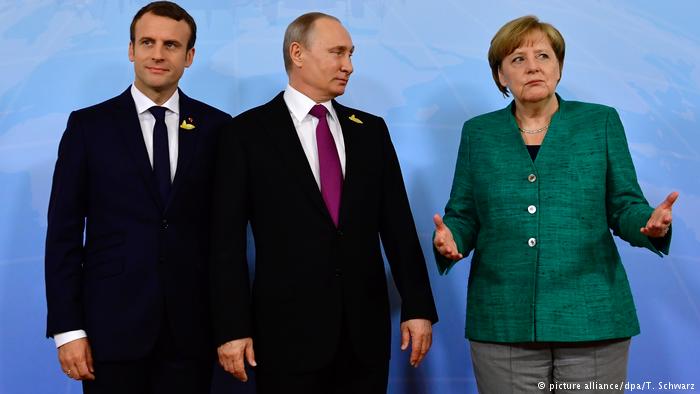 UCMC publishes a translation of the Deutsche Welle article devoted to yesterday’s telephone negotiations in the Normandy format.

Leaders of the Norman Quartet Angela Merkel, Emmanuel Macron, Petro Poroshenko and Vladimir Putin held telephone negotiations on the situation in Donbas on Monday, July 24. The French President took part in the Normandy format talks for the first time.

The conversation lasted about two hours. The participants listened to a report of Ertugrul Apakan, Chief Monitor of the OSCE Special Monitoring Mission to Ukraine, and his deputy Alexander Hug. The leaders of the states pointed out the importance of complete ceasefire in Donbas, withdrawal of heavy weapons and separation of forces under the OSCE SMM round-the-clock monitoring of the situation.

President of Ukraine, Petro Poroshenko, said that the last days of July were among the bloodiest in Donbas in 2017, and urged Russia to immediately stop aggression and weapon transfers to areas uncontrolled by Kyiv. According to the President’s website, Poroshenko also called to send the UN peacekeeping mission to Donbas.

Poroshenko stressed that the release of hostages in Donbas is blocked by the Russian side. According to him, Ukraine insists on the immediate release of all hostages, including those illegally detained in Russia, in particular, Oleh Sentsov and Roman Sushchenko.

The last time the Ukrainian side managed to exchange hostages in Donbas was almost a year ago.  According to the Security Service of Ukraine,  134 Ukrainians appear to have been taken captive by Russia-backed militants.

Macron and Merkel are against “Malorossiya”

Merkel and Macron stressed the inadmissibility of any statements that undermine the territorial integrity of Ukraine, in particular, about the creation of the so-called “Malorossiya.”

After the talks, Macron said on his Twitter: “Direct dialogue for concrete actions. The evidence of the joint work of Berlin, Paris, Moscow, and Kyiv on the crisis in Ukraine.”

According to the official Kyiv, Merkel, Macron, Poroshenko and Putin will continue their work on a road map for implementing the Minsk agreements. For this purpose, a meeting of the foreign policy advisers to the presidents of the Normandy format states is planned to be held in the second half of August.