Yesterday in Donetsk sector, militants carried out eight attacks, most of them – near Avdiyivka, Kamianka and Butovka mine. The firing began after 18:00 and lasted until midnight. “The adversary used grenade launchers of different systems, small arms, in Kamianka – armored vehicles, and in Avdiivka militants traditionally used heavy weapons, firing about seven mortar shells at nightfall,” said Col. Andriy Lysenko, Ministry of Defense of Ukraine spokesperson on ATO-related issues, at a briefing at Ukraine Crisis Media Center. According to him, in response the Ukrainian military opened fire from the weapons unprohibited by the Minsk agreements. At about 20:00, militants carried out a 30 minutes long armed provocation in Pisky.

In Luhansk sector, the intensity of fighting decreased. For the past 24 hours, militants violated ceasefire three times – in Stanytsia Luhanska, Novotoshkivske, and Novozvanivka. The attacks were short and from light weapons.

In Mariupol sector, militants violated ceasefire three times. “In the morning, the adversary fired mortars upon our bases near Krasnohorivka. After 17:00, there was a hostile armed provocation at Shyrokyne. Militants fired tripod-mounted man-portable antitank guns and automatic small arms upon our positions for about an hour. Another ceasefire violation took place in Bohdanivka, in the vicinity of Dokuchayevsk, after 19:00. The adversary used similar light weapons,” noted Col. Lysenko.

For the past day, one Ukrainian serviceman was killed, and nine were wounded as a result of hostilities. “The ATO forces suffered most losses – 1 dead and 8 wounded – in Krasnohorivka during a mortar bombardment. Another Ukrainian military was wounded during the shelling in Shyrokyne,” said Col. Lysenko.

According to available information, two militants were killed not during the fighting, and four were wounded as a result of fighting on the contact line yesterday. 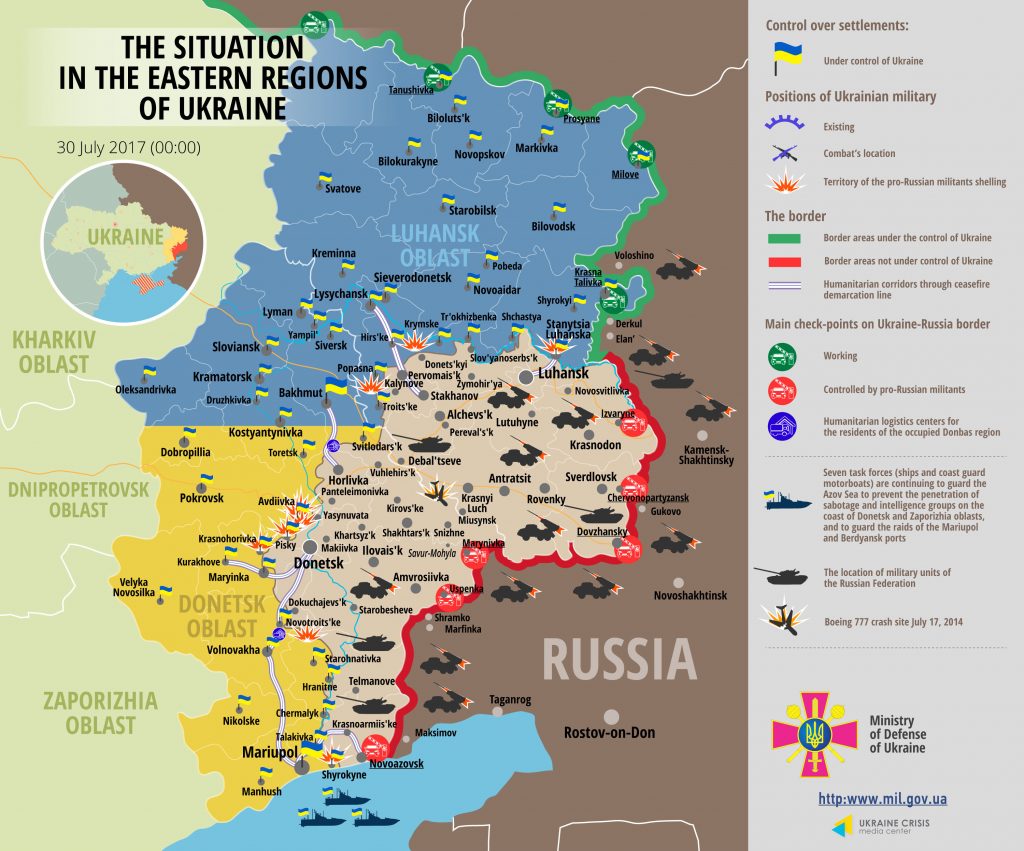 Report on the military developments as of July 29 is available here. Interactive data on the shelling: chronology shelling chart and the interactive map.