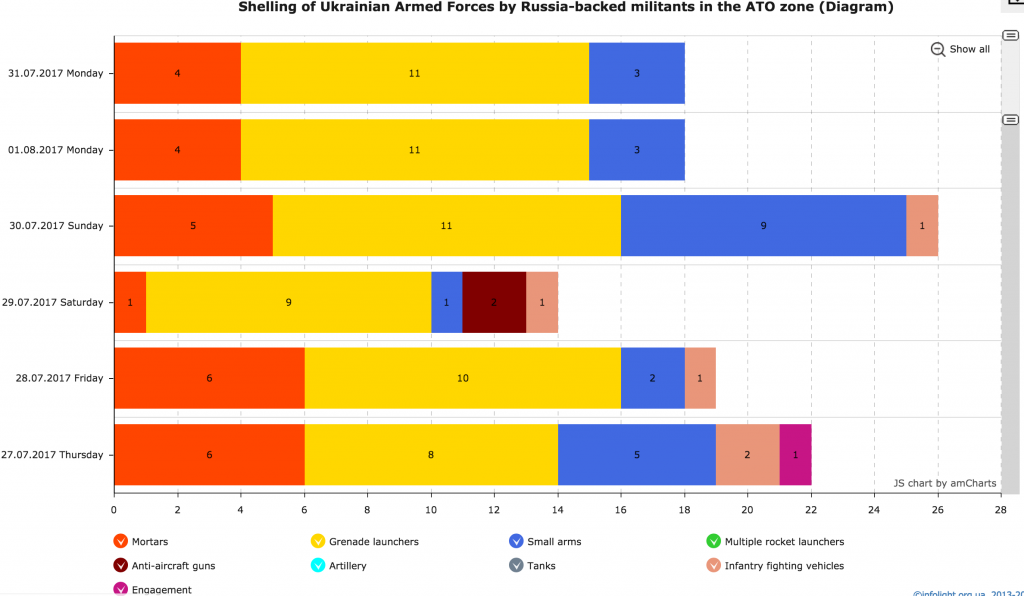 In the combat zone in eastern Ukraine between July 27 and August 2, three Ukrainian servicemen were killed in action, 21 were wounded in action.

Russia-backed militants conducted 10 ceasefire violations in Luhansk sector. The incidents involved armor in Svitlodarsk area, mortars in Popasna and an attack with the use of IFV mounted weapons in Novozvanivka. In the morning, Ukrainian servicemen spotted a militant subversive reconnaissance group of approximately 10 persons advancing towards Ukrainian positions in Novotoshkivske and fired for effect. The enemy stepped back in 15 minutes. Two Ukrainian servicemen were wounded in action in the incident. In Donetsk sector, Russia-backed militants violated the ceasefire four times. In Avdiivka the enemy was using grenade launchers, small arms, and mortars. In Mariupol sector Russia’s proxies made eight attacks, they used grenade launchers and small arms in Vodiane, Shyrokyne, Pavlopil and Talakivka. One Ukrainian serviceman was killed in action, five were wounded in action.

Russia-backed militants staged provocations in the area of Kamianka, Avdiivka and Shakhta Butovka in Donetsk sector. They used mortars, machine guns, and grenade launchers. In Luhansk sector, most active combat actions continued in Novozvanivka, near Bakhmut road, and in Novotoshkivske. In Mariupol sector Russia-backed militants made three attacks upon the Ukrainian troops’ positions using mortars, grenade launchers and IFV mounted weapons. On this day, Ukrainian troops incurred no lethal casualties.

15 ceasefire violations on the part of Russian proxies were recorded in Luhansk sector. Four Ukrainian servicemen were wounded in action. Positions of Ukrainian troops were attacked with mortars and small arms near Popasna, in Krymske, near Novotoshkivske, in Katerynivka and near Stanytsia Luhanska. In Donetsk sector militants fired upon Horlivka, Zaitseve, Avdiivka and Shakhta Butovka position. In Mariupol sector militants attacked Maryinka with small arms, mortared Pavlopil and Hnutove, and attacked Lebedynske and Shyrokyne with light weapons.

Russia-backed militants were blocking the truck of the OSCE Special Monitoring Mission without any explanation for over seven hours. The truck was carrying video equipment. The incident happened near Olenivka, Donetsk region.

Militants blasted engineer ammunition near Staromykhailivka, with the intention to pass it off as shelling from the government-controlled territory. One Ukrainian serviceman was killed in action and two were wounded in action. Lebedynske was the epicenter of combat action in Mariupol sector. Militants made a total of nine attacks in the sector using large-caliber machine guns, grenade launchers, IFVs and mortars. In Luhansk sector, Ukrainian troops registered 12 ceasefire violations by militants. Popasna area was the hottest spot where militants were using grenade launchers and small arms. Ukrainian troops spotted an enemy sniper was firing in Novozvanivka. Donetsk sector accounted for 13 militant attacks, six of them included the use of heavy weapons, over 50 projectiles were fired.

despite a large number of militant provocations, Ukrainian troops incurred no losses. Ten attacks were recorded in Luhansk sector, 11 attacks in Donetsk sector and nine in Mariupol sector. In Donetsk sector, the Kamyanka – Avdiivka – Shakhta Butovka frontline accounted for most of the attacks. In Mariupol sector, Lebedynske and Vodiane came under fire of enemy 122-mm artillery. At about 21:30 militants fired upon the residential areas of Vodiane. There were no civilian casualties.