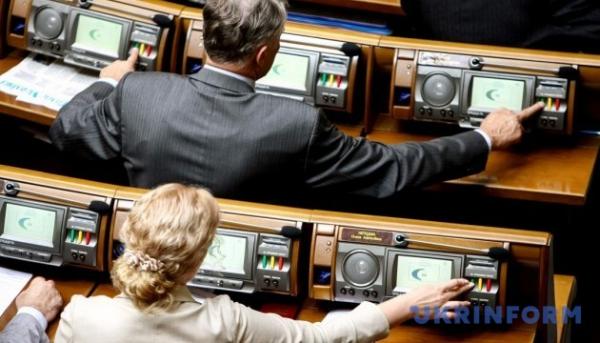 The Verkhovna Rada: an inspiring tale, or a soap opera?

Political analysts evaluate the work of the Parliament as unsatisfactory. The MPs’ attitude to parliamentary discipline is flippant. In 2017, more than €55,000 was deducted from MPs’ salaries due to absenteeism. Another “illness” of Ukrainian parliamentarians is the so-called “button-pushing”. The deftest deputies manage to press simultaneously the buttons of their five “counterparts” and thus push the necessary law. There is no punishment for this misconduct. The third major problem is corruption. Over a third of Ukrainian MPs are currently involved in the anti-corruption investigations, including a number of tender frauds, bribes to voters during the election, and dishonestly filled e-declarations. No deputy has been convicted of these actions yet.

The number of presidential legislative initiatives adopted by the parliament suggests that the Parliament implements the President’s political will rather than counterbalance him. Only in the last six months, 83% of the adopted 275 legislative acts were the initiatives of the President of Ukraine, 24% were proposals of the Government and only 10% were law drafts introduced by the deputies themselves. The communication between the parliament and ministries leaves much to be desired. Experts also criticize the tendency of parliamentarians and voters for populism – the former promise a lot and perform very little, and the latter elect populists year in year out and do not control their work.

Neither are political analysts satisfied with the quality of MPs’ performance in committees and conciliation boards, where they are supposed to thoroughly discuss bills. MPs with conflicts of interest were identified in each special-purpose committee, the highest percentage is observed in the Agrarian Committee, where corruption schemes are almost flagrant.

That many important reforms have been implemented for the first time since the collapse of the Soviet Union in Ukraine, at least at the legislative level. Ukraine should be grateful for this to conscious citizens, many of which went to legislative and executive power, while others effectively monitor and highlight their activity, as well as to the external pressure of the International Monetary Fund and the European Union.

The current parliament reflects a lot of negative things in society: Ukraine has not defeated the traditional cronyism, let alone other types of corruption, has not overcome clannishness and has not learned the basic principles of modern democracy – the separation of mutually controlling branches of power and the system of parties, each of which is supposed to defend the interests of a certain part of population rather than promise to make everyone happy, but actually minding only the business interests of their heads and sponsors.

It is unlikely that we can objectively assess the work of the current parliament today since most results will be seen in years or decades. Nevertheless, today’s Ukraine has many positive examples of successful implementation of decentralization, the Ukrainian army has developed considerably, the economic growth is evident, doors are open for new people in power, and these are just a few examples of the country’s renewal, which is impossible without the legislative support of the Parliament.

Renaissance of the Verkhovna Rada, Part One: The Game of Thrones

Renaissance of the Verkhovna Rada, Part Two: The Fangorn of Reforms