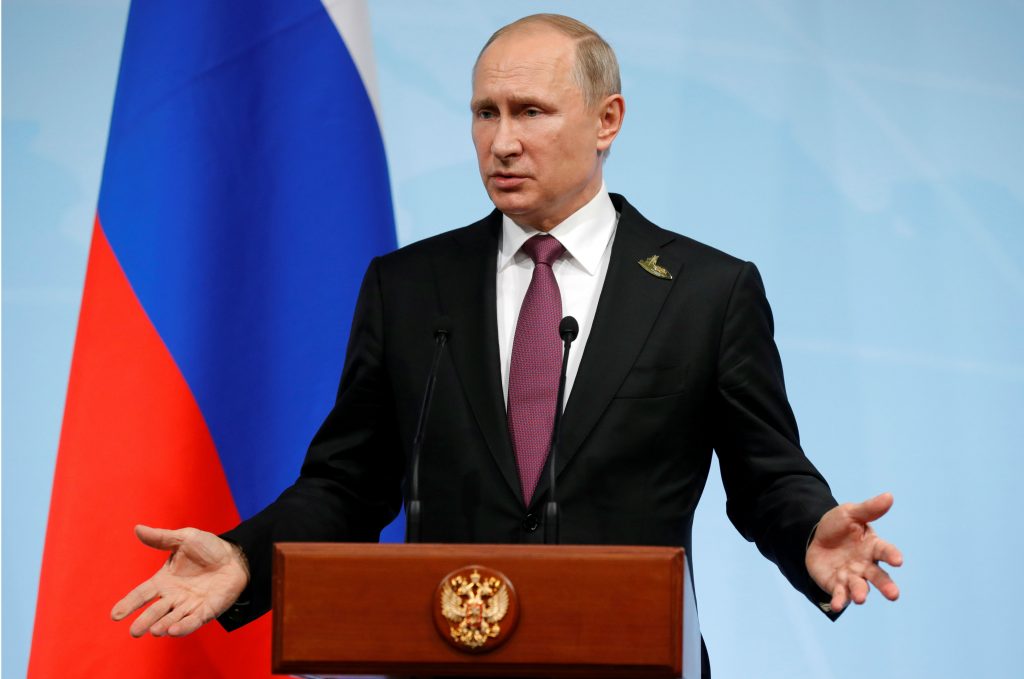 After a break in publications, UCMC is happy to present our readers with the next article by Peter Dickinson, first published at Atlantic Council and reprinted with the author’s permission. Enjoy!

When Kremlin proxies in eastern Ukraine declared the foundation of “Malorossia” in mid-July, most people laughed. This bizarre attempt to replace Ukraine with a “Little Russian” vassal state was seen as one more indication of how hopelessly out of touch Russian policymakers are with Ukrainian public opinion. However, at least one man in Moscow failed to see the funny side. Key Putin aide and Ukraine curator Vladislav Surkov called it a way of sparking debate within Ukraine while emphasizing that the Donbas is not fighting to separate from Ukraine but for the country’s future. “Kyiv wants a pro-European utopia,” he commented. “The Donbas responds with Malorossia.”

Russian President Vladimir Putin voiced similarly optimistic sentiments during the July G20 summit in Hamburg, where he accused the Ukrainian leadership of “trading in Russophobia” and blamed a handful of Kyiv politicians for driving an artificial wedge between Russia and Ukraine. “I am absolutely convinced the interests of Ukraine and Russia, of the Ukrainian and Russian people, fully match,” he claimed, before accusing the West of preventing Ukraine and Russia from moving closer together “at any cost.”

These developments provide insight into Moscow’s apparent delusions over the catastrophic loss of Russian influence in Ukraine since 2014. The Kremlin clings to the idea that a silent majority of pro-Russian Ukrainians lies ready and waiting, poised to take over the reins in Kyiv at the right moment and steer Ukraine back into the Kremlin orbit.

Such wishful thinking is nothing new. On the contrary, it is consistent with Moscow’s historic characterization of the Ukrainian independence movement as the work of an extremist minority and their foreign backers. However, the events of the past few years have left Kremlin notions of Slavic solidarity looking more anachronistic than ever. Although Putin refuses to admit it, the sun is setting on centuries of Russian preeminence in Ukraine, and he has only himself to blame.

When historians look back at the collapse of Russia-Ukraine relations, they will likely pinpoint the invasion of Crimea as the decisive moment. The 2014 military takeover of Ukraine’s southern peninsula and the subsequent Kremlin-led hybrid war in the east have forced Ukrainians into a fundamental reassessment of their attitudes toward Russia. It has poisoned bilateral ties and transformed what was essentially a trade dispute into the geopolitical divorce of the century.

On a personal level, the impact has been particularly painful. Thousands of extended families living on both sides of the border are no longer on speaking terms. Lifelong friendships have fallen victim to the polarization of propaganda. As the conflict has dragged on, rivers of hate have created an entirely new topography, obliterating the blurred borders and casual sense of community that once drew Russians and Ukrainians together as kindred spirits in a wider world.

On the national level, survey after survey has reflected a massive shift in Ukrainian public opinion. Formerly solid support for closer ties with Russia has evaporated, while membership of the European Union and NATO have become increasingly appealing. The war has proved a watershed moment in Ukraine’s nation-building experience, forcing Ukrainians to address issues of national identity after decades of post-Soviet ambiguity. Record numbers now self-identify as Ukrainians, with the rising profile of Russian-speaking Ukrainians one of the major social breakthroughs since 2014. Nobody talks about Russian fraternity anymore, except in the most bitterly sarcastic of terms.

Many in Moscow will no doubt hope this violent swing in public opinion is reversible. After all, history is full of warring nations that rebuilt ties once the bloodletting stopped. France and Germany fought two world wars in the twentieth century before going on to serve as the twin engines of a united Europe. Britain and America came to blows in the late eighteenth century before eventually returning to the common ground that had once united them. Time will also eventually heal the wounds of the current Russia-Ukraine conflict, but when the relationship does finally resume, it is likely to be on a strikingly different footing.

One of the key problems facing the Kremlin in Ukraine is the loss a pro-Russian electorate. Moscow-leaning former Ukrainian President Viktor Yanukovych relied heavily on voters from Crimea, Donetsk and Luhansk regions. This electorate now finds itself disenfranchised by Putin’s hybrid war. Even if it proves possible to reintegrate Donetsk and Luhansk into the Ukrainian political system, these regions are unlikely to remain as uniformly pro-Russian as they once were. With almost two million internally displaced people currently experiencing different regions of Ukraine for the first time, the post-war political landscape in the Donbas is likely to be far more pluralistic.

Generationally, the clock is also ticking against any future Ukrainian return to the Russian orbit. In both business and politics, Ukraine is currently in the hands of the last Soviet generation, many of whom were born in Russia, studied in Moscow, or did their Red Army service alongside Russians. This shared Soviet experience is foreign to the emerging generation of young Ukrainians. For them, the current conflict will serve as the definitive point of reference for all things Russian.

Beyond politics, Russia finds itself without many of the levers it traditionally used to maintain its position in Ukraine. The Ukrainian government’s ability to wean the country off its addiction to Russian gas has denied the Kremlin its weapon of choice, while Russia’s own embargo policies have robbed Moscow of the incentives inherent in blossoming bilateral trade. Losing access to Russian markets has been a painful and expensive experience for the Ukrainian economy, but there are signs that the worst is over. Ukrainian exporters are finding new partners in the EU and beyond. As they broaden their economic horizons, they will be in no hurry to return to Russian partners who operate as the business wing of the Kremlin.

Russia’s political and economic reach in Ukraine are both in freefall, but the greatest setback for the Kremlin has come in the soft power sphere. Until the outbreak of war in 2014, Russia enjoyed enormous soft power influence in Ukraine. Ukrainians watched Russian TV channels and Russian-made TV serials. They flitted between Russian and Ukrainian websites while favoring Russian email and social media services. The Russian and Ukrainian celebrity worlds functioned as a single entity. Pop stars from both countries would perform on the same concert circuit before starring together in joint New Year gala celebrations. In this sense more than any other, Kremlin assertions that Ukraine was part of a wider “Russian world” were largely accurate.

Over the past three years, this situation has changed dramatically. Ukraine has banned Russian TV channels and social media platforms, while Ukrainian channels face severe restrictions on the Russian-made content they can broadcast. Many Kremlin-friendly Russian pop stars are no longer welcome in Ukraine, while Ukrainian stars who choose to continue touring Russian cities risk pariah status at home. None of these bans is absolute, of course. For example, many Ukrainians continue to access Russian social media and Russian TV content through online resources. However, the boundary between Russian and Ukrainian media landscapes is now clearer than ever, while the prevailing mood in Ukraine is encouraging more people to opt for homegrown media.

It is not difficult to imagine why Moscow is so reluctant to recognize the decisive decline of Russia’s position in Ukraine. Since assuming the presidency in 1999, Putin has sought to reassert Russia’s superpower status and the regional dominance lost during the 1990s. Losing control over Russia’s most important imperial outpost does not fit into this narrative. Nevertheless, the odds appear stacked against any Russian revival in Ukraine. In the short term, this will mean a continuation of the low-level fighting in eastern Ukraine. In the longer term, the eclipse of Russian domination offers Ukraine the opportunity to reach its true potential as a sovereign nation. Russia may have lost the war of Ukrainian independence, but Ukraine has yet to win.