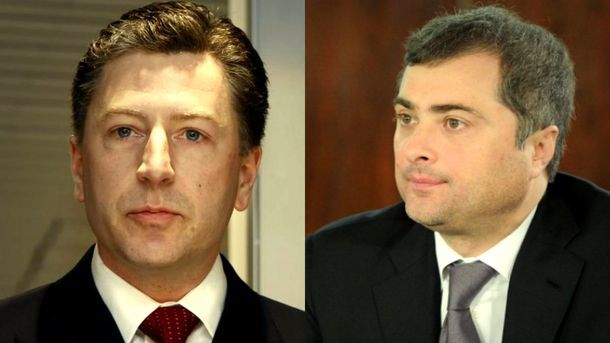 On August 21, the United States Special Representative for Ukraine Negotiations Kurt Volker met with the Russian Presidential assistant Vladislav Surkov in Minsk, said the spokesperson of the Ministry of Foreign Affairs of Belarus Dmitry Mironchik. According to him, the meeting, which was held behind the closed door, began at about 2pm, and ended after 5pm. There is currently no information about its results. The parties discussed ways to resolve the Donbas conflict. Kurt Volker did not plan to communicate with the media on August 21.

As was noted, the meeting was held behind the door, communication with the media was not scheduled at all. Therefore, it is very difficult to draw conclusions about the consequences of the meeting for Ukraine. Kurt Volker did not give any comment at all. Vladislav Surkov  briefly described the nature of the meeting, calling it useful and constructive and noting that the parties offered new ideas to settle the conflict in the south-east of Ukraine and innovative approaches to their implementation. “We agreed that the current situation in the south-east of Ukraine can satisfy neither the conflicting parties nor the external forces contributing to the settlement,” he said. According to the informed source, “the meeting was restrained; it was informational and fact-finding. The parties listened to each other’s positions respectfully and carefully.”

What should Ukraine do: rejoice or wait?

Among Ukrainian officials, Yuriy Grymchak,  Deputy Minister for Temporarily Occupied Territories and Internally Displaced Persons, expressed the most optimistic forecast. In an interview to Channel 5, he stated that the decision for Russia to withdraw from Donbas had already been made. “The only thing discussed today is how they will go, on what conditions, etc.”

Volodymyr Ariev, MP from Petro Poroshenko Bloc, Chairperson of the subcommittee on interparliamentary liaison office, bilateral and multilateral relations of the Verkhovna Rada of Ukraine Committee on Foreign Affairs, considers it a good sign that the meeting between Volker and Surkov was held not in Moscow but in Minsk. “Volker, in fact, performs the functions once assigned to Victoria Nuland. She went to Moscow to negotiate with Surkov. Obviously, this time the US side wants to meet in the territory where negotiations are taking place.” According to him, now Americans want a much more serious conversation with Russia.

But Volodymyr Ohryzko, former Foreign Minister of Ukraine, advises to be patient and not wait for quick results. “”Volker is only collecting information so far. He needed to hear the other side, understand their logic. Concurrently, he wants to listen to any arguments of the Russian party and gain insight into the position of the Russian Federation. But you must understand that nobody ever expects any breakthrough results from the first meeting. They cannot appear ipso facto, because the parties are, in fact, getting acquainted with each other.”

Dmytro Tymchuk, MP, leader of the “Information Resistance” group, also believes that the scenario of the rapid withdrawal of Russian troops from Donbas is too optimistic. However, in his opinion, if such a decision is made, Moscow will reserve some scenario to continue to influence these territories.

Bohdan Yaremenko, ex-Consul General of Ukraine in Edinburgh and Istanbul, chairman of the Maidan of Foreign Affairs Board, is even less optimistic; he said that the consequences of this meeting will need to be closely monitored to ensure that “the US will not do anything that would run counter to the interests of Ukraine. Hypothetically, such a possibility exists.”

Although two days have passed since the meeting between Surkov and Volker, Moscow has not yet made any statement on this matter. According to Leonid Gozman, Russian politician, president of the Union of Right Forces movement, the prolonged silence may be explained by the fact that Volker or Surkov does not have the authority to solve the problems. “It seems to me that they have the authority to analyse, and they must report this analysis to their superiors. They can prepare some solution. ”

The West is waiting for further development of the event

At the moment neither the White House nor the leaders of France, Germany, and Normandy format countries have commented on the meeting between Volcker and Surkov. First reacted Lithuania, where  on August 22, after the meeting with Surkov Volker came to, to meet with Lithuanian president Dalia Grybauskaitė in Vilnius. According to the press service of the President of Lithuania, the conversation was about the situation in Ukraine. “In the conditions of the ongoing occupation of Crimea and Russian aggression in Donbas, Ukraine needs international support. It is extremely important that the sanctions against Russia imposed by the United States and the EU continue until the Minsk agreements are fully implemented and Crimea will  be returned to Ukraine,” the statement runs.

James Marson, political columnist for The Wall Street Journal, believes that Volker met with Surkov to test Russia’s readiness to settle the conflict in Donbas. After all, it was Surkov whom the Kremlin appointed the coordinator of militants in Donbas. “Putin is the father of separatists, and Surkov is their nanny,” the journalist quotes Valentyn Nalyvaichenko, the former SBU head.

On August 23, Kurt Volcker will visit Kyiv, where he will join Defense Secretary Jim Mattis in meetings with senior Ukrainian government officials of to discuss the next steps in the diplomatic negotiations. Perhaps the situation will become clearer after this meeting. But understandably, the path to a complete cessation of the conflict will be long and difficult.