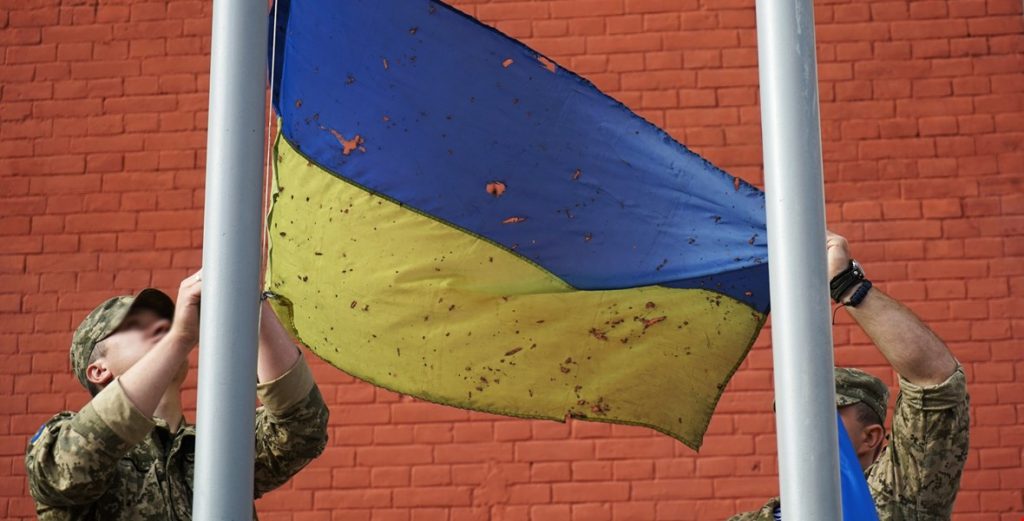 On August 23, Ukraine celebrates the Day of the National Flag. In the morning of that day a solemn ceremony was held to raise the flag on Sofia Square in Kyiv, a place historically related to the blue-and-yellow Ukrainian banner.

“The Ukrainian flag symbolizes the Ukrainian people’s invincible spirit and their will to win,” President Poroshenko wrote on his official Facebook page.

“I believe that our biggest victories in the name of Ukraine are still ahead, and the blue-and-yellow flag will fly over Donetsk, Luhansk, Simferopol and Sevastopol!” stressed the President who attended the ceremony.

“This year marks the 100th anniversary of the beginning of the Ukrainian national revolution of 1917. Our blue-and-yellow flag became a symbol of the Ukrainian People’s Republic, and later – the Western Ukrainian People’s Republic. And it was under this flag here, on Sofia Square, on January 22, 1919, where the historical merger of both young states into a single united Ukraine took place,” said Poroshenko.

“Incidentally, exactly 25 years ago, the State Center of the UNR in exile bestowed symbols of the UNR power on the first president of independent Ukraine Leonid Kravchuk and proclaimed modern Ukraine its successor. Here is one of the relics – kleinody (regalia) of Ivan Mazepa’s time,” said the President.

National Flag Day has been celebrated in the country since 2004. Earlier, the Day of the National Flag was celebrated only in Kyiv at the municipal level. The capital celebrated this holiday on July 24. That day, in 1990, the blue-and-yellow flag was hoisted over the Kyiv City Hall. It is officially believed that on August 23, after the coup in Moscow failed, a group of people’s deputies brought the blue-and-yellow Ukrainian flag to the Verkhovna Rada session hall. This flag, as a relic, is solemnly kept under glass in the Verkhovna Rada museum. The next day Ukraine declared independence.