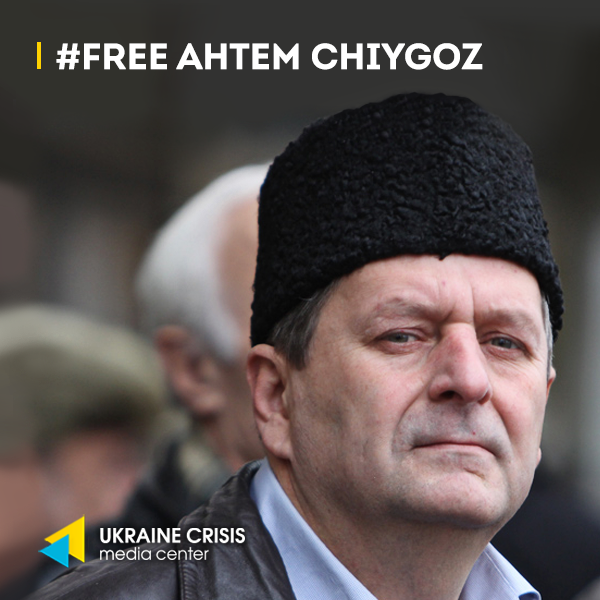 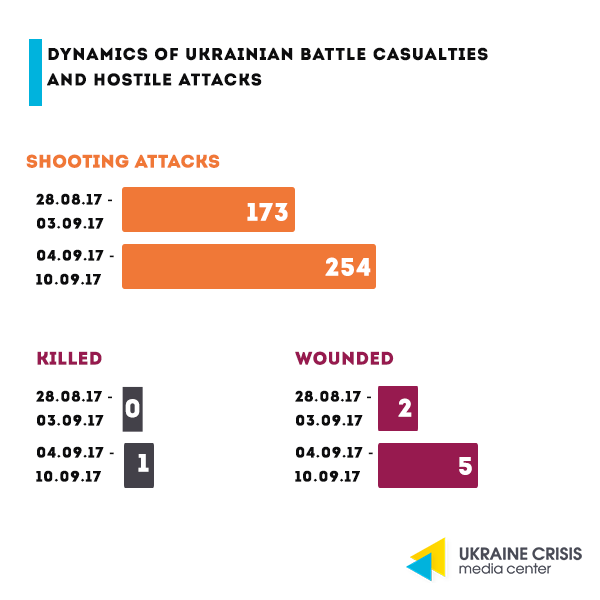 Russian troops and weapons in Donbas. InformNapalm, a Ukrainian OSINT group, identified nine contract servicemen of the 8th brigade of the Russian Federation Armed Forces who were fighting in eastern Ukraine in summer and autumn of 2014. Leonid Kalashnikov, MP of the Russian Duma, said that Russia “will have to” openly supply the weapons in Donbas, if the Ukrainian Armed Forces get weapons from their western allies.

OSCE. Chief Monitor of the OSCE Special Monitoring Mission to Ukraine (SMM) Ertugrul Apakan emphasized that in the first six months of 2017 75 per cent of the cases when the SMM freedom of movement was limited took place in the occupied part of Donbas controlled by Russia-backed militants.

UN peacekeepers in Donbas. Last week the Ukrainian delegation to the UN passed for consideration to the UN Security Council a draft resolution on the deployment of the peacekeepers in Donbas. On September, 5 Russian President Vladimir Putin also tasked the Foreign Affairs Minister to present a resolution on peacekeepers in Donbas to the UN Security Council. The fact that the Kremlin brings up the topic of the peacekeeping mission in Donbas points to the changes and may open some possibilities. “To be sure, the version of the peacekeeping mission Putin proposes is a distinct non-starter. He wants a light force along the contact line between his separatist forces and the rest of Ukraine. That casts the conflict as an internal Ukrainian affair, providing cover for Russia’s forces there as well as for its control of the international border,” says Carl Bildt, former Foreign Affairs Minister of Sweden in his article for the Washington Post.

Ukraine’s Foreign Affairs Minister Pavlo Klimkin called the Kremlin’s option of deploying the peacekeepers a manipulation. “The attempt to deploy the peacekeepers only along the contact line is the way to freeze the actual state of play. We see Russia’s striving to legalize its colony, its protectorate in the occupied part of Donbas,” Klimkin said. The draft resolution of the Russian Federation on the deployment of a UN peacekeeping mission to Donbas was not supported by the UN Security Council members.

Militants have confirmed holding captive the Ukrainian journalist Vasin. Representatives of the “DPR” and “LPR” confirmed that journalist Stanislav Aseyev (Vasin) is in the list of persons for the exchange, reported Iryna Herashchenko, Ukraine’s representative to the Trilateral Contact Group negotiating in Minsk.

Connection with the Donetsk-based blogger and contributor to the radio Donbas.Realii Stanislav Vasin was lost on June 2. Earlier, representatives of the “DPR” and “LPR” were claiming that they have no information on his whereabouts. A series of human rights and journalist rights organizations launched an appeal calling to find out where he was and release him in case he was held captive. The organizations include the journalists’ union of Ukraine and that of Russia, Reporters Without Borders, Committee to Protect Journalists, Amnesty International as well as the UN Human Rights Monitoring Mission in Ukraine.

How Saakashvili came back to Ukraine 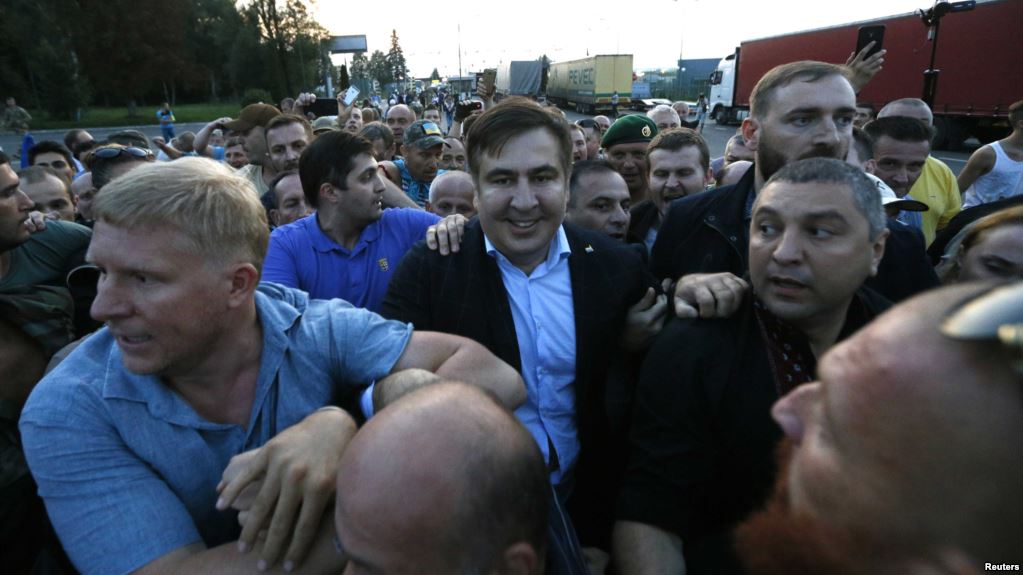 Political show. On September 10, former head of Odesa region and ex-president of Georgia Mikheil Saakashvili crossed into Ukraine without required documents. Earlier on that day, he tried to cross the border on board of the train Przemysl-Kyiv (from Poland), however the Ukrainian railway company Ukrzaliznytsia stopped the train. Saakashvili approached the border on the bus. Following long negotiations, the crowd literary brought him into the Ukrainian side. He was escorted by Ukrainian MPs among whom was Yuliya Tymoshenko.

Saakashvili said he would be asking for an ID of a stateless person that would make it obligatory for the Ukrainian side to let him in. However, the politician’s supporters speeded up the process by breaking through the border. Later Saakashvili said that he was heading to Lviv, where he would decide on what to do next.

It all started on July 26, when President Petro Poroshenko stripped Saakashvili off the Ukrainian citizenship with a decree. The formal pretext for the action became the fact that Saakashvili allegedly had not presented the information on the criminal proceeding opened against him in Georgia. The Ministry of Justice of Georgia hopes that Ukraine will extradite Saakashvili after he is back in the country. The Ministry of Justice of Ukraine confirmed it had received the request from the partner agency in Georgia regarding the extradition of Saakashvili.

Law enforcement response. Ukraine’s Prosecutor General Yuriy Lutsenko said that those responsible for the illegal crossing of the border during which Saakashvili got into Ukraine will be held criminally liable. The State Border Guard Service reported that several border guards and policemen were injured during the breakthrough. The Ministry of Interior elaborated that 12 policemen and five border guards were injured. Minister of Interior Arsen Avakov said that Mikheil Saakashvili has to complete the border control procedures either at the Shehyni border crossing point or at the office of the Migration Service.

Public reaction. The return of the politician became a scandal. Politicians, opinion leaders, journalists and experts were discussing the event all day long. Many of them condemned Saakashvili’s actions – with his voluntaristic gesture the politician undermined the idea of the state border. He thus demonstrated that a group of unarmed persons may cross the border without any obstacles. It is not that much important whether the border in question is in the east or in the west. Prime Minister Volodymyr Groysman called it “an attack against the Ukrainian statehood”, President’s Envoy on the peaceful settlement of the conflict in Donetsk and Luhansk regions Iryna Herashchenko called it “humiliation of the country”. However, many pointed to the fact that Saakashvili’s actions come as a response to how Saakashvili was deprived of the citizenship in a voluntaristic and politically motivated way by President Poroshenko. Moreover, many of the actions that the Ukrainian authorities took to on September 10 violate the Ukrainian legislation including the illegal train stop with Saakashvili on board, closing the border due to the alleged “mining” of the border crossing point etc. The situation now extends beyond legality and has reached political standoff that generally does not contribute to the benefit of Ukrainian society.

Akhtem Chyigoz, deputy head of Mejlis – the highest representative body of Crimean Tatars, was arrested by the de-facto Crimean authorities in January 2015. On February 26, 2014, he took part in the rally in support of Ukraine’s territorial integrity in front of the Crimea’s Parliament. Supporters of Ukraine’s unity were opposed by Russia-backed activists including the ones from the “Russkoye Yedinstvo” (Russian unity) party. De-facto authorities of the annexed Crimea charged Chyigoz with a public order crime.

Security was reinforced at the Supreme Court building in Crimea in the morning of September 11 where the sentence to Chyigoz was announced. Additional police forces were deployed and metal detectors were installed.

Ukrainian film director, political prisoner Oleg Sentsov, was transferred to an unknown place from the Irkutsk prison where he had been sent to earlier. It was reported by his lawyer Dmytro Dinze. Talking to human rights defenders Sentsov said he was not aware of the reason why he had been transferred from the Sakha Republic (Yakutia). 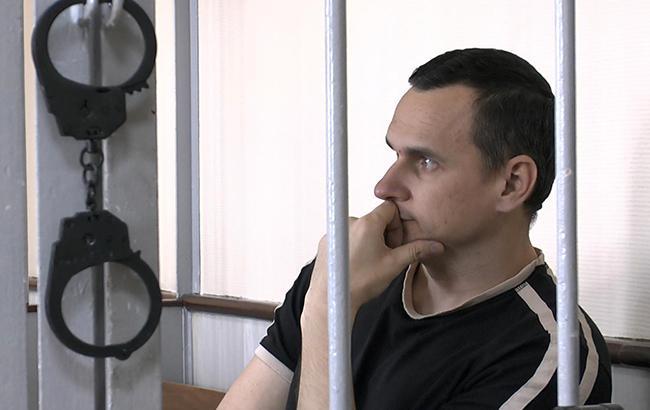 This week Lviv is to host one of the key book-related events of the Central and Eastern Europe – the “Publishers’ Forum in Lviv”. The event offers the program designed for both publishers and industry professionals, as well as a literary program that will see writers meet the wider audience. The Forum has a traditional section with the focus on poetry. Poets from Lithuania, Slovakia, Croatia, the Czech Republic, and the US will be featured in it, including Marie Iljašenko, Czech poet of Ukrainian origin, Nathalie Handal, poet of Palestinian origin, Lithuanian poets Marius Burokas and Sara Poisson. Other international guests of the forum include Philippe Sands (the UK), Henry Marsh (the UK), Hanna Krall (Poland), Peter Watson (Canada), Karl-Markus Gauß (Austria), Witold Szabłowski (Poland), as well as 50 more authors from 25 countries. Among the Ukrainian participants of the forum, there will be Serhiy Zhadan, Lyubko Deresh, Oksana Zabuzhko, Natalka Snyadanko etc. Follow the Forum’s program and events here. 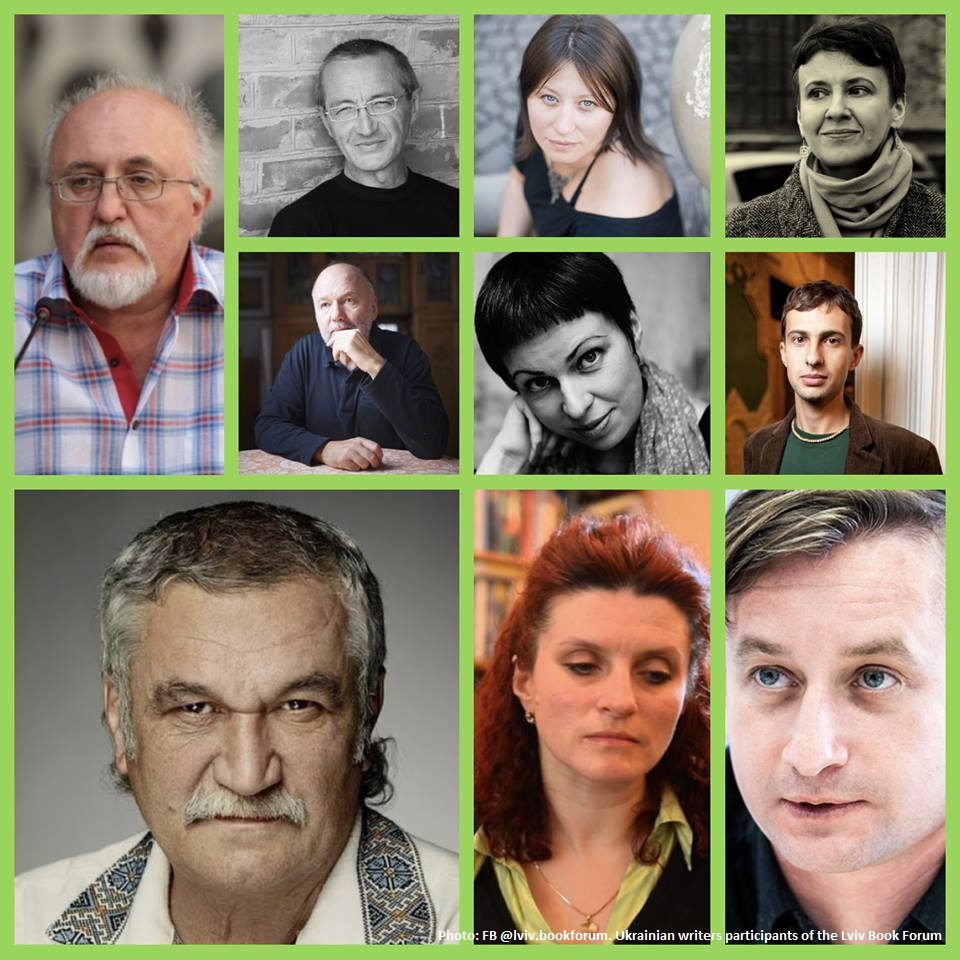 Ukrainian boxer Oleksandr Usyk won with a technical knockout over German boxer Marco Huck in the quarter final of the World Boxing Super Series and defended the WBO champion’s title. The Ukrainian boxer kept the leading role during the entire fight and starting from the third round he was confidently attacking the opponent. In the tenth round, Usyk conducted a massive attack compelling the referee to stop the fight. 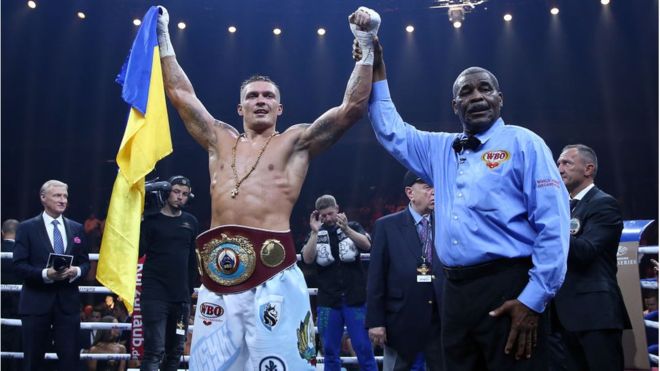