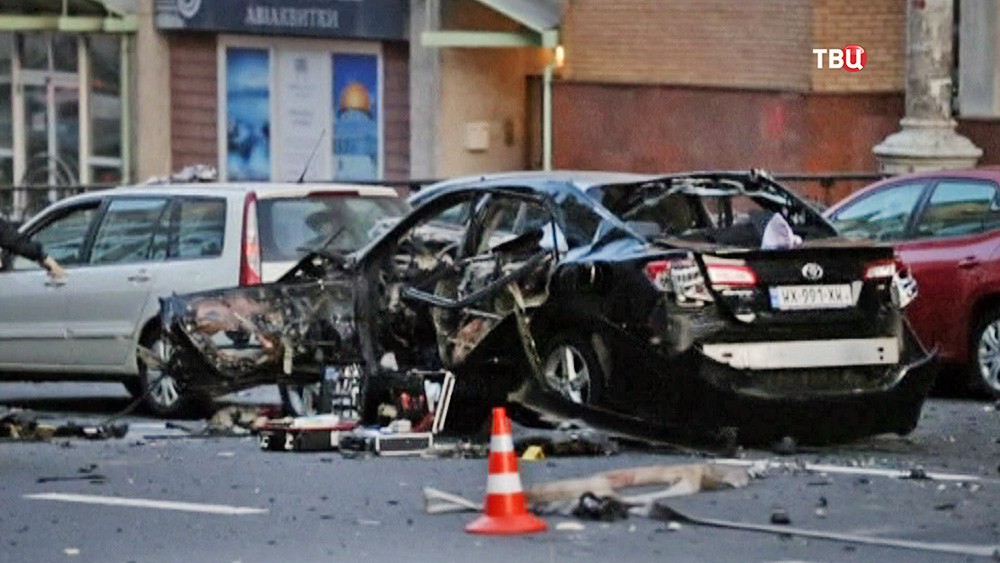 In the evening of September 8, a car blast shook the downtown Kyiv near the Bessarabka market. A Toyota Camry was blown up, one of the passengers was killed, two were hospitalized. On arriving at the scene, the police identified the deceased as a Georgian citizen, a Chechen Ali Timaev, known as Timur Makhauri – a member of the Chechen volunteer battalion named after Sheikh Mansur, who fought in the ATO zone. Two other passengers, a woman, and a child, were hospitalized. The police instituted criminal proceedings under Part 2 of Art. 115 of the Criminal Code of Ukraine (premeditated murder committed in a socially dangerous manner). Kyiv law enforcers said they could reclassify the crime from premeditated murder to terrorist attack.

The foe of Russia and the murderer of Basayev?

According to Interior Ministry press secretary Artem Shevchenko, Timur was well known in the criminal world: “He is a citizen of Georgia. He had stable contacts with various Chechen circles, he was also detained and brought to justice in Ukraine this year, but he concluded a deal with the investigation, pleaded guilty and received a suspended sentence for the crime … he was detained for,” said Shevchenko.

Journalist Yuriy Butusov confirms that Turkish law enforcement agencies had detained Timur Makhauri in 2012 as an agent of Russian special services on charges of murder and attempted murder of some members of the Chechen anti-Russian underground. Makhauri had been under investigation for three years, but then he was released since the investigators failed to prove his involvement in the murders. However, he was undoubtedly in close contact with the identified Russian agents, these video recordings are public. Butusov also writes that Makhauri was a personal friend of Georgian ex-Interior Minister Georgy Lordkipanidze . He was also an employee of Georgian special services and fulfilled the tasks of this country’s leadership.

Moreover, according to Hromadske,  Makhauri is believed to have killed the leader of Chechen separatists, head of the Chechen Republic of Ichkeria Shamil Basayev in 2006. In an interview, Makhauri said that he had smuggled a truck with weapons from Georgia to Chechnya, and when Basayev examined it, the truck exploded. However, Makhauri said that he was not responsible for what had happened to the truck after the transfer. The same source states that in 2012, Makhauri went to Syria and, according to him, coached people who were in opposition to President Bashar Assad.

The identity of the woman who was in the car brought up many questions. According to the first information, it was a well-known model named Natalia. The media called various surnames of the victim: Natalia Gotsiy (she denied this information), model Natalia Koshel (her photos were published by all Ukrainian media) and, according to the law enforcement agencies, Tatyana Samoilova. According to the latest version, it may be some Natalia Tselovalnikova and her eight-year-old daughter Mariya from her first marriage (with a businessman). It is reported that the former spouses were waging a real war for the child.

The woman was severely injured in the car blast. Her limbs, eyes, soft tissues and internal organs were damaged.

Three versions: which one will be confirmed?

It should be reminded that this is not the first high-profile attack on participants in the anti-terrorist operation in Kyiv over the past four months. In early June 2017, Chechen volunteer Adam Osmayev was injured as a result of shooting in the center of Kyiv. At the end of June, as a result of a terrorist attack, lieutenant-colonel of the military intelligence of Ukraine Maksym Shapoval was killed in one of Kyiv’s bedroom districts.