No Ukrainian troops died in action, and one soldier was wounded. The incident happened in Krymske during a hostile attack. In Luhansk sector in ATO zone hostilities occurred only in the vicinity of Bakhmut road, in Krymske-Novotoshkivske frontline, informed Ukrainian Ministry of Defense spokesman on ATO- related issues Colonel Andriy Lysenko. “Right after midnight the enemy conducted two brief mortar attacks in Novotoshkivske from two different positions. Later militants stopped their activity and resumed attacks after 20:00 only. Russian proxies fired 100 mortar rounds at our strongholds in three hours, and also actively used light weapons,” he said. Ukrainian troops responded with fire. 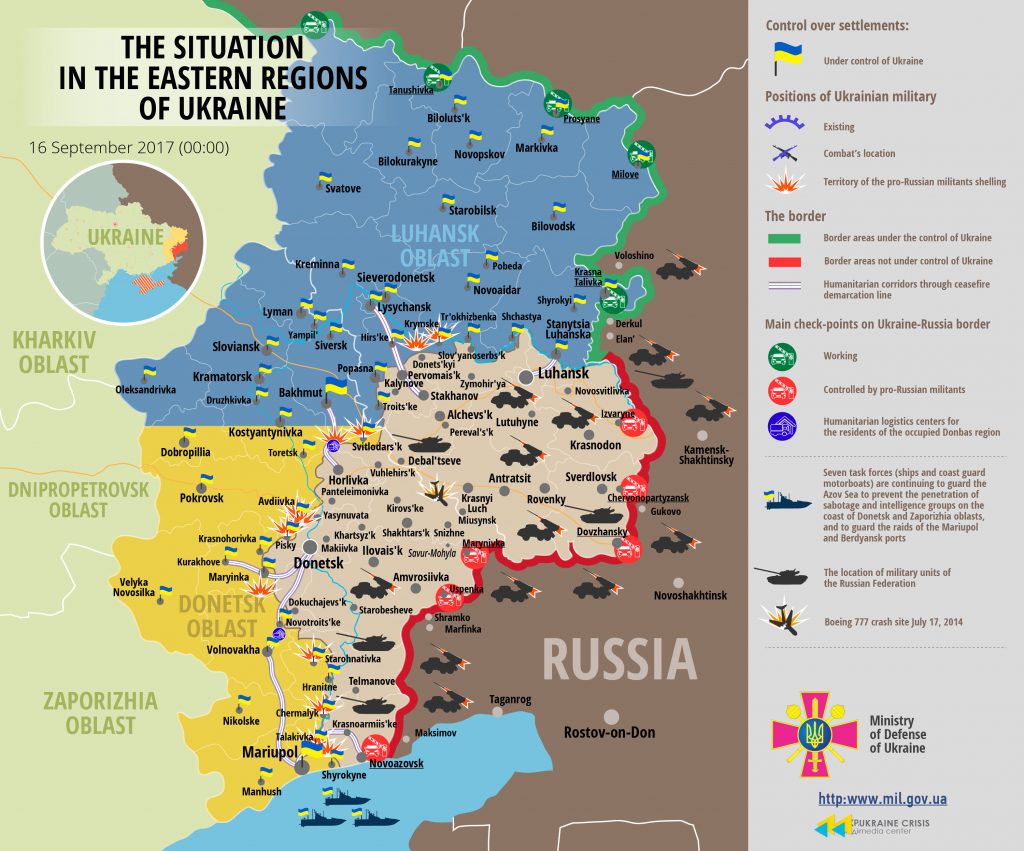 In Donetsk sector militants violate the ceasefire virtually along the entire frontline. “The enemy used mortars and armor in Avdiivka and Pisky. All hostile attacks were quite lengthy – 30 minutes and more,” said Col. Lysenko. In total, Russia-backed troops violated the ceasefire nine times in this sector. They used heavy armor twice. Ukrainian troops responded with fire four times.

According to the Chief Intelligence Directorate of the Ministry of Defense of Ukraine, concurrently with West-2017 strategic command and staff exercise of the Armed Forces of the Russian Federation, command and staff exercise takes place on the temporarily occupied territory in the east of Ukraine. At the same time, administration of this event is highly inefficient. “During proceeding of convoys of self-proclaimed “2dn brigade” most APCs ran out of fuel, which resulted in suspension of their advance to the training area and launching of investigation to fund those guilty in fuel plundering,” said Col. Lysenko.

Report on the military developments as of September 15 is available here. Interactive data on the shelling: chronology shelling chart and the interactive map.